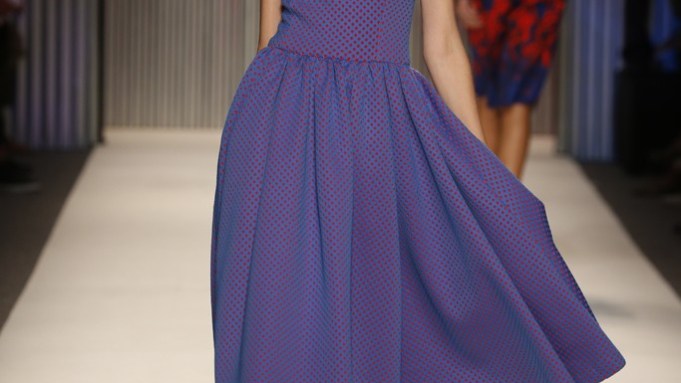 Marina Albino has only been in New York for two months, but the 19-year-old is already in high demand by some of the biggest names in fashion. “I did a Lanvin presentation back in Brazil, and that’s why they sent me here,” the Brazilian model says. “I guess they liked me, so they called my agent and said ‘We want Marina for our New York presentation.’”

For her first New York Fashion Week, Albino did shows for Tracy Reese, Clover Canyon, Christian Siriano and The Blonds. A few days after her final walk, the Trump-repped brunette sat down with WWD to talk about her freshman season and more.

WWD: Have you recovered from fashion week?
Marina Albino: It was so crazy. One day, I just didn’t sleep. I was home, ready to sleep, and my agents called me: “Marina you have a fitting right now.” My face was completely covered with cream, and I had just washed my hair.

WWD: What time did they call?
M.A.: It was 11 p.m., but the casting was far from my house. I couldn’t really take a bus or a subway, so I just started walking. I don’t like to take taxis because I am not rich….There were some guys in the street like, waving at me, and I was like, “Oh my god, I really need to go back to bed!” But it’s fine, I’m alive.

WWD: What was the casting for?
M.A.: Katie Gallagher. I also did Alexandre Herchcovitch, Christian Siriano, Tracy Reese and a few others. I didn’t do big shows but for my first season, I think I did OK.

WWD: Did you have a favorite show that you walked in?
M.A.: I was in love with the clothes at Juan Carlos Obando. I wore pink pants with this pink-and-green T-shirt. The material was amazing. I think the clothes were probably very expensive.

WWD: Any crazy hair or makeup?
M.A.: The Blonds! They just put our hair totally on top of our heads. It was really cool. My outfit was this bodysuit with some frou frou all over. Did you see the show? It was crazy. At one point, there was an astronaut on the runway….

WWD: What is the best part about fashion week?
M.A.: Every day I was with my friends and if I was at castings, I tried to meet friends. I just met Hollie-May Saker two weeks ago, and we’re almost married now. She calls me her wife. I was living with her [during fashion week].

WWD: In a model apartment?
M.A.: Yes. In the beginning there were eight girls in the apartment. Eight girls! Can you imagine the bathroom in the morning?

WWD: What were you doing before you started modeling?
M.A.: I was working at a hospital as a receptionist. I worked all the day and in the night I went to school. It was hard because I was 16 but I was working like normal people.

WWD: How were you discovered?
M.A.: I actually went to the agency. I just decided, “I want to be a model. I need to be a model, and I will.” They signed me, and I came to New York three months ago.

WWD: What do you think of New York so far?
M.A.: This city is so me. Earlier today, I was sitting in Greenwich Park and a guy just sat down next to me and started talking. I don’t know how to explain it, but I just feel at home here. Brazil is not like this.

WWD: Have you done any traveling for work?
M.A.: Well, I’m going to Paris soon.