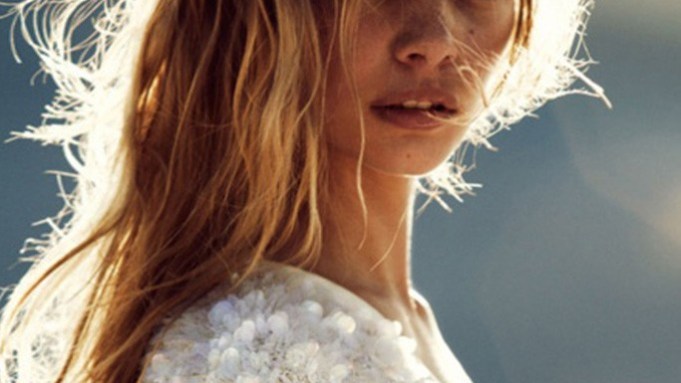 With her perfectly tousled hair and slightly flushed complexion, Marloes Horst looks as if she’s just been lounging on the beach. Not the case. “I’ve been in bed for three weeks with pneumonia,” the Next-repped model says. “The first week you can barely move, but by the second week you’re like, ‘OK, maybe let’s move to the couch.’ By the third week, you’ve seen everything on TV.” Fully caught up on “The Big Bang Theory” and ready to rejoin the outside world, Horst, a Holland native, stopped by the WWD office for a quick chat.

WWD: How did you get started?
Marloes Horst: My best friend, who is still my best friend, always wanted to be a model. And I’m from the smallest town in the world. We did not know what Vogue was. But I think every girl has that fantasy of being a model, and she was totally obsessed. When we were 15, she didn’t want to do it alone, so we both sent out pictures. Then I got reactions back and she didn’t.

WWD: Was there any animosity about that?
M.H.: She was never disappointed to my face, but her mom had a talk with me, like, “She’s so sad.” But we got through it. We’re all good.

WWD: What do you consider your big breakthrough moment?
M.H.: I think the first big thing was the Valentino perfume, which was so random. It was Siri Tollerød and Erin Heatherton, and then me. I had just started out and didn’t know what I was doing. It was a commercial and Siri was the focal point. I was like, “I hope I don’t have too much. Maybe they’ll scoot me in the background later.”

WWD: Where was the shoot?
M.H.: Paris. And you know, when you do the big shoots, you get the best hotels and you get flown business class. It was such a big deal to me. I got to the hotel and it was so pretty and luxurious, and here I am this little chick not fitting in whatsoever.

WWD: When did you start to feel like you fit in?
M.H.: When I got to New York. I started in London and Paris, and I was not a good fit for Paris, especially when I started. It was really about that Russian, really harsh look. I got really negative feedback. I’m like, “What am I doing here? Maybe this isn’t for me.” Then I came here and I worked from the start. Someone from every country lives in New York, so you’re not an outsider. In Paris, you’re the girl who doesn’t speak French.

WWD: What were some of your first jobs in New York?
M.H.: I shot with Terry Richardson pretty fast, and I have to say that he helped make my name here. He’s been really good to me.

WWD: How did you meet him?
M.H.: I just went on a casting, and you know, you get a little bit of a brief like, “This is how he is and be prepared.” I went and stayed there for two hours. We sat and talked and had tea — it was so comfortable. It was such an inviting place. I get the whole reputation he has because on the shoot itself, there’s music blasting and he has the crazy energy. But when we were at the casting, he was really chill.

WWD: How do you balance commercial and editorial jobs?
M.H.: I’m living the dream. If I only do editorial, it doesn’t pay. I mean, you’ll get pretty pictures out of it. The editorial girls need to do all those editorials in hopes of getting a fragrance campaign. That’s their only hope of surviving. I’m very lucky that I can do both and I don’t have to worry about a money situation.

WWD: How long have you been shooting for Victoria’s Secret?
M.H.: It’s been an on-and-off relationship. I started shooting for Pink five years ago, then they decided to transition me to the main line. It’s all about knowing when you fit in. They have their group of Angels….It’s hard to push yourself into that tight group.

WWD: Have you been approached about becoming an Angel?
M.H.: Yes, especially when everyone got pregnant. But they all bounce back so quick! That’s the problem. They should all stay fat a little longer. They’re too smart.