The Women Direct-repped beauty chatted about her career, her breaking-the-budget “It” bag procurements and her friendly crush on a certain fashion designer. 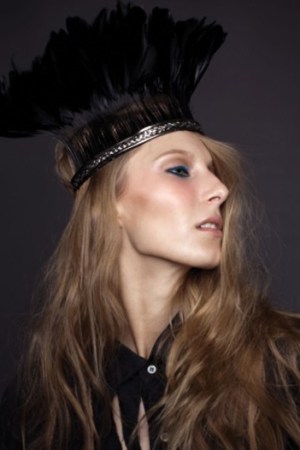 Martyna Budna has her priorities straight. When initially approached by an agent in her native Poland, she brushed him off. “I was 16 and still in school,” she says. “I told them I wouldn’t start until after I graduated.” After some coaxing, Budna gave in, but just a tiny bit. “I did local jobs here and there,” she says, “but nothing big.” Now five years later, it’s safe to say she’s officially gone big: She walked on 23 runways for the fall season. The Women Direct-repped beauty sat with us to chat about her thriving career, her breaking-the-budget “It” bag procurements and her friendly crush on a certain fashion designer.

Why did you wait until after you graduated high school to start modeling?
I know a couple of models who are still in school and can actually handle it. But it’s not a real education. I mean they work, work, work until they have to go home for final exams, which they cram for and try to learn everything on the plane ride home. High school is where you get all the basics so I just felt like I had to do it fully. I love modeling but one day it’s finished and then what?

Do you ever go back to Poland?
Yes, my family is there. I always say that no matter how much I travel, my home is always in Poland. Ryn is a small town; there are like 3,500 people there. But we have tall buildings and everything. It’s the most beautiful part of Poland. Everyone says that, not just people from Ryn.

How did you get into modeling in the first place?
My family and friends would say that I should try. Then I was reading this Polish magazine called Twist, it’s like a teenage magazine, and this agency had put in this ad about a modeling competition. So I sent in my picture and they called and had me come in to the agency. When they put me in the magazine later I remember everyone at school was coming up to me and asking if it was me, even my friends because I didn’t tell anyone.

Who are your favorite designers?
I would say Haider Ackermann. I’ve gotten to walk with him three times already. His stuff is like the perfect combination of modern edginess and still has elegance. I also love, love, love Balmain. Whenever I see Balmain clothes I just want to put them on immediately.

What was the last thing you bought?
I went shopping yesterday and I bought a skirt from Catherine Malandrino. I also really wanted one of her jackets. It’s absolutely amazing but too expensive.

What was your first major splurge?
It was a Gucci bag. I fell in love with it. I called my mom because she knows fashion and has really good style. I was like, ‘Mom, I’m choosing between the classic one, which is 2,600 euros and the one from the new collection which is 1,400 euros.’ She was like, ‘2,600 euros? Are you kidding me? Don’t you dare!’ So I found this beautiful Dolce & Gabbana bag later that day that wasn’t so expensive and just bought one for me and one for my mom so she couldn’t get mad.

Speaking of bags, what are the items you always have in yours?
I’m a really organized person so my bag is really neat. Most women have such a mess in there. I have my wallet, my BlackBerry, a little cosmetics case, keys, and one thing that I always have, which is pepper spray. I’ve had it with me all the time for two years.

What has been the highlight of your career so far?
Posing with Michael Kors, definitely. It was amazing. Everyone at the shoot was so excited — the girl who did my nails, the makeup artist, the hairdresser, everyone. It was supposed to be just me, the stylist, the photographer and Michael in the room when we shot but everyone like snuck in.

What’s he like?
He’s lovely. I wasn’t expecting that either because sometimes people like that, who have so much power, tend not to be so friendly; not that they’re rude but they just keep to themselves. But he was really great. He’s the type of guy you want to be friends with. He was telling all these stories about his recent trip to Spain and Italy. Everyone was cracking up. He’s a complete jokester.

What’s the strangest thing you’ve had to do as a model?
Once, I was at a casting for some sort of swim product in Japan and we had to wear a clip on our noses, goggles and a bathing suit. We had to pretend we were swimming. It was so awkward because, I mean, there was no water. We were just running around in circles in front of this camera and I just kept laughing. They were like, ‘Stop laughing!’ but I couldn’t stop.