It’s no surprise that seven seasons in, she’s still landing some of the biggest shows, including Lanvin, Isaac Mizrahi and Haider Ackermann. 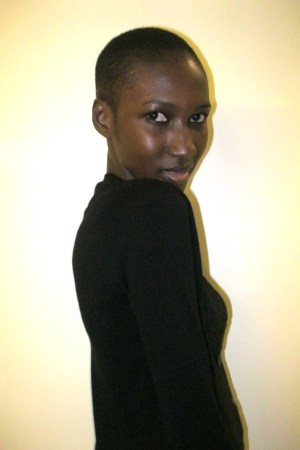 All smiles and amusing anecdotes, Nana Keita has that star-quality magnetism that most in the industry strive for. But the 23-year-old didn’t have to rely on her charisma to get to the top. Mali-born, 5 feet, 11 inches with a close crop and immaculate skin, Keita stands out in a crowd. It’s no surprise that seven seasons in, she’s still landing some of the biggest shows, including Lanvin, Isaac Mizrahi and Haider Ackermann.

How long have you had short hair?
Normally, my hair is down my back. I just cut it in September, right when castings were starting for the New York shows. I was stressed out and everyone was touching my hair and putting products in it and pulling every which way so I just ran to the salon and was like, please cut everything off now! So many girls lose so much hair during fashion week, it’s awful, so I was just like take it off now before it starts coming out in clumps!

Was your agency upset that you hadn’t consulted with them first?
They had actually been wanting me to cut it for a while. They kept asking me to and I was like, “No, I’ll look like a boy!” because in my country we don’t cut our hair. Different parts of Africa cut it short but not Mali. But I’m getting use to it. It was also nice during fashion week since I get ready in half the time. Even with makeup because my skin is so dark, I only need a little bit so I can afford to show up late to shows.

How did you get into modeling in the first place?
My sister, my mom and I were traveling to Paris and on the plane there was this guy. He was an agent, I guess. He approached us and my mom thought he was crazy. She was like, “Are you serious? This girl’s still a baby!”

How old were you?
I was 16, so to her, that’s like a baby. She would be outraged to see how young the girls are nowadays. But anyway, she sort of shooed him away but that gave me the modeling bug. I said to my mom, “Please let me be a model! Please!” I was a good girl at school, always got straight As, so that helped and she finally gave in. Then I signed with Trump, but my mom didn’t want me to do it full on until I was done with school, so I was just doing things here and there. I finished school a couple years later, moved here and started full time.

What happened when you got to New York?
Well my contract with Trump was up so I had to start at square one so I just went to agencies on my own. I signed with Red and worked with them for a little while until I eventually went to Muse, which was a little over three years ago. Everything started happening after I signed with them. That’s when I met with Alber [Elbaz]. I didn’t know who he was. He complimented my shoes, then he was like, “You need to come to Paris and do my show.” I said, “OK, I’ll let you know.” I didn’t know he was such a big deal! Then my agency said “Oh my god! He’s one of the biggest designers in the world and the Lanvin show is one of the biggest ones a model can do!” I was like, “Oh really? Woops.”