The 21-year-old model's nomadic spirit certainly lends itself to her vocational pursuits — her doe-eyed visage doesn’t hurt either. 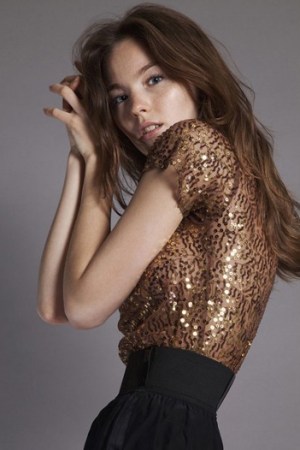 If you want to make it as a model, a fair amount of globe-trotting comes with the territory. Lucky for Natalia Osikova, she already had plenty of training. “I was born in Kazakhstan, then I moved to Belarus, grew up in St. Petersburg, then to Tokyo for a bit, then Moscow and finally to New York,” said the chatty 21-year-old. “Modeling is full of extremes and adventure. I love it.” Osikova’s nomadic spirit certainly lends itself to her vocational pursuits — her doe-eyed visage doesn’t hurt either.

How long have you been modeling?
I started when I was 17. That was the first time I went to Japan. That’s where most of the girls start. I went having no pictures, no experience, nothing. So I’ve been modeling for a few years, but in between I stopped for a year.

Why?
Because the first time I went to Singapore, after Tokyo, they dyed me blonde there.

What’s wrong with that?
It was like Marilyn Monroe blonde, like platinum blonde. It just wasn’t my style. It was hard because I felt like it really limited me. I couldn’t really give that much in pictures because the look was so specific. It was all about being sexy, playful and youthful but it was hard because I couldn’t give a range. It just made me tired of modeling after a while. I just decided to come back to my natural color and cut all my hair off.

How short did you go?
I cut it like a boy. Really, really short.

What did you do during your year off?
I came back to St. Petersburg and entered into university. I was in the Oriental Studies department.

And then you started modeling again?
I spent one year there studying and my hair was growing out, but then I received an invitation from VNY [Model Management] to come to New York. A friend of mine from St. Petersburg used to model and he put me in touch with them. It was the biggest decision of my life because it meant staying [in New York].

What were your first impressions of New York?
I had no idea if I would like it or not. I’m in love with Tokyo, I spent so much time there and I thought maybe it would be similar here. My Russian friends who came here were divided into two: people who loved the city and people who hated it. People who were born in the Soviet Union, they still have this little feeling that the USA is bad and is the enemy for some reason. It’s like an embedded feeling in our society. I can’t really explain it. It’s just part of the Russian mentality. But I love it here. If I didn’t, I wouldn’t be here.

Has your family visited you yet?
Not yet. But right now we’re planning a trip; we have to do all this paperwork to get my mom a temporary visa. I have to make this formal invitation from me to her. It’s a long story but it’s not so bad. Tourist visas are easy. To get a working visa, that’s much harder. There are all these different types — I have 0-1, which is for people who have extraordinary abilities or something.

What does that mean?
They have different types. This is the one for musicians, for celebrities, for models, for actors. It’s for creative people. A lot of foreign designers have this same kind.

So are you continuing your studies in St. Petersburg?
Yes, I still study in St. Petersburg. I come back for one month each half a year. I switched my focus to philosophy after one year. I love it but it’s not something that will really help me in my life. You can’t really work as a philosopher, right? But for now, it influences the way I like to think. It keeps me reading.

When is your next month of cramming?
Right now. Well, actually, it’s been pushed back a little. I was supposed to be in St. Petersburg the first of June, that’s when my classes started. But I got so many jobs. They booked me for Sonia Rykiel, for Rebecca Minkoff [resort]. Then next week I’m shooting the American Eagle campaign for two or three days.

That’s a big deal.
It’s good news, but I’m stuck here and can’t go back to classes. This is the dilemma for every model. Your time doesn’t belong to you at all. Your booker can call you at like six in the morning and say, ‘OK, pack your luggage, you’re leaving in two hours from LaGuardia to do a shoot in Seattle.’ That happens all the time but it’s good if they keep you working.

If you weren’t working today, what would you be doing?
I would go to the beach and get some rest, have a few mojitos and tan. Wouldn’t you?