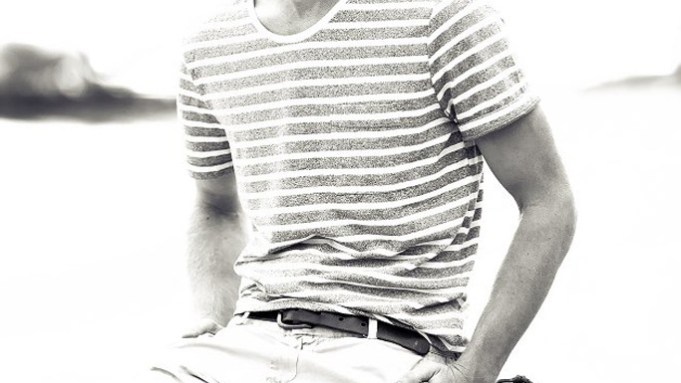 In an industry heavily populated by barely legal teenagers, 34-year-old Nathan Lowry is quite the anomaly. The Portland, Ore., native is the first to admit that modeling was never exactly part of his life plan: “Guys don’t exactly grow up dreaming to be the next Derek Zoolander,” says Lowry. Yet with 10 years of countless editorials and runway work under his belt, the Fusion-repped model is not complaining. WWD sat down with the blonde-haired, blue-eyed Gonzaga University grad to discuss his world travels, sketchy location shoots and his Grizzly Adams beard.

WWD: Were you in New York for Hurricane Sandy?
Nathan Lowry: Yes, but I live on the Upper West Side. We left the window open all night long. We had no refugees though. I put out some offers but no takers. It was just hunker down, which became my word of the week. I hunkered for like a week. I did a lot of cooking.

WWD: What’s your specialty?
N.L.: I don’t really have a specialty. I go through phases. I’ll hit up curry for a week. I did pizza and pierogi, which are so difficult that it’s not even worth it. My cooking phase now is not cooking. I’ve been going to a lot of restaurants instead. There’s a place that a few of my buddies always go to in the West Village called Rockmeisha. It’s this little Japanese place that seats like 10. There’s a tiny bar with a black-and-white TV playing old Westerns which, if you’ve ever been to Japan, they’re obsessed with Americana.

WWD: Have you worked in Japan?
N.L.: Yes. You go to castings all day. It’s not that romantic. You get up, go drive around in a bus or van with a bunch of other models, do your castings and then you start working after a week. They pretty much work you to the bone.

WWD: How did you get started modeling?
N.L.: I was in Amsterdam with a couple of friends. We were riding bikes, doing Amsterdam things, and my buddy was like, “Dude, there’s a guy following us.” He was following us for 15 minutes but then he caught up and said, “Hey, you should try this.” I had a lot of trepidation about the whole thing, but that’s how it all started. I was 24 at the time, so I got a really late start.

WWD: What were you planning to do before that?
N.L.: I had just graduated from Gonzaga University, where I studied journalism and media-related things. Up until that point, I was pretty sure that I wanted to go into newspaper writing or broadcast journalism. Then once I got out of school, I thought maybe I should go to law school, so I was working for law firms in Oregon.

WWD: What has been your favorite job to date?
N.L.: I always come back to this one job, several years ago, for L’Uomo Vogue. We went to the Alps, just north of Venice. I grew up skiing and I was a huge, huge fan of it. We’re on the mountain and nobody else is there and it’s a gorgeous blue sky. To be in that environment is kind of dream come true — to have a job that connects with your interest. And they found a pair of old skis at this lodge we were shooting at. They looked really unsafe — and they were. Plus, there was really no snow, except for this patch. But we tried for a little bit, and it’s one of my favorite shots.

WWD: What about your least favorite?
N.L.: Oh, I don’t want to name names. You definitely have good jobs and bad jobs. The worst things that I’ve ever had to do are where clients are trying to get you to do something physical that probably isn’t necessarily safe. One time I had to jump on this trampoline and land on the ground over and over. This girl and I were doing this all day long. We’re not 60 years old or anything, but our knees hurt.

WWD: Are clients ever surprised to hear that you are so much older than the typical model?
N.L.: Absolutely. I have a little beard going these days, and I like to do it when I can, but it adds several years to my face. Clients do get [turned off by my age], because there’s that dissonance that sometimes can’t be overcome. One time I went on a casting with this big beard, and this was for Lacoste. You go on castings where people are young, but these are 17-, 18-year-old guys. We’re talking very, very young. Then I’m there with this Grizzly Adams beard. I felt so out of place.