With a few soon-to-be-unveiled editorial shoots under her belt, Martinez landed in Manhattan last month to prep her first-ever New York Fashion Week. 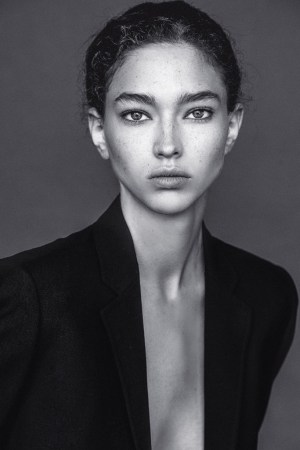 The exotic, almost feline beauty of Nichole Martinez — not to mention her amazing head of hair — might have something to do with her multiracial background: the 19-year-old Colorado native is Puerto Rican, Mexican, German, Russian and Scandinavian. A brand new face from Elite, Martinez is just starting to get her feet wet after being discovered a few years ago at a local Taylor Swift concert with her friends.

With a few soon-to-be-unveiled editorial shoots under her belt, Martinez landed in Manhattan last month to prep her first-ever New York Fashion Week. “I just love hearing other people’s stories,” she said. “When we’re all in the [model] apartment, it’s like, ‘How did you get found?’ Some girls say, ‘I wanted to become a model.’ But most of us are like, ‘I never thought of this.’”

WWD: How did you start modeling?
Nichole Martinez: I got discovered at a Taylor Swift concert in Colorado four years ago. I was 15 at the time, so it was like, “stranger danger, get away from me. Oh my gosh, this is creepy.” But I had my friends with me, and they were like, “Whoa, you could be a model?”

WWD: What changed your mind?
N.M.: I went home and talked to my parents about it, and they were like, “Well, if you really wanna do this…” They said I had to go to college instead, because they were being good parents. But I was like, “No one else gets this opportunity!”

WWD: How did your career initially take off?
N.M.: They sent me to this casting thing in Colorado. They narrowed it down to 100 girls, then 25, then four. If you made it to four, they were like, “You’re not leaving without signing a contract.” I made it to four. But I was still in high school, so I couldn’t really do anything. Then they flew me out to New York with my mom, where we did some test shoots. I’ve been to London and L.A., too.

WWD: Growing up in Colorado, would people ever tell you that you should model?
N.M.: I volunteered at my elementary school a lot and the teachers would always say, “You could be a model.” And, of course, you get the random people on the street. But I never thought about modeling except “America’s Next Top Model.” I just wasn’t really thinking about it.

WWD: Have your experiences in modeling thus far measured up to what you saw on “America’s Next Top Model?”
N.M.: All of the shoots [on the show] are so dynamic and the models will be hanging from things from the ceiling. You will get lost in the city, and the drama is definitely there, but the cattiness is not. Most people understand that you need to be nice in this industry because people talk.

WWD: Are you liking New York so far?
N.M.: Everyone’s always asking me if I could move to New York. My home is in Colorado, though. Maybe later, if I get married and we both decide to move here. But I’m definitely a suburbs girl. I can get with the city; it’s just a little chaotic.

WWD: How’s the model apartment?
N.M.: All the girls are really nice. Usually, you have that person who will think everything [in the apartment] is theirs no matter what. But this time, it’s all girls who are new, and we’re all relying on each other. Netflix is popular. Other than that, we just kind of hang out and watch TV.

WWD: Your hair is amazing.
N.M.: I get this hair from my Hispanic side. I got a keratin treatment so it’s very tame right now. They usually tell me to tame it down like this. Sometimes, I’ll go to shoots, and they’re like, “Oh my God, I love your hair, I’m not touching it.” But at castings, they want it tamed down. If I come in with my wild hair, they might be taken aback.

WWD: This is your first major fashion week, but you did walk a few graduate runway shows in London.
N.M.: Runway was terrifying. I did it three days in a row. My hands were shaking when I came off. You can’t panic because by the time you get off, you have to run and change into your next outfit.

WWD: So I take it you prefer editorial shoots?
N.M.: I love editorials. While on the catwalk, you only have one chance to do it. With editorials, you can do your own thing, and then they’ll be like, “It would be cool if you did it this way.” You can look at the pictures immediately and say, “Okay, I need to move my chin up; my arm’s a little weird.” I love the process. I was not a fashion girl before I got into this. I would put on jeans and a T-shirt. Most people don’t think about the models, they just think, “These clothes look awesome.” But once I started doing editorials, I realized that there’s a whole team behind it. Even if it’s “natural” looking, it takes an army.

WWD: Have you always felt comfortable in front of the camera?
N.M.: I’m usually the person who takes the pictures. My mom would sometimes be there on my first test shoots, and she would look away but I still felt awkward. Everyone feels judged on shoots. But I tried to be normal.

WWD: Have you been practicing your walk?
N.M.: You get your schedule each night for the next day. You have to come into the agency. They have this hallway right by their desks and they put a mirror in front of you; it’s intimidating. You just keep walking up and down this hallway, and they give you runway music so you can walk to the beat. There will be three people watching you. You can’t hesitate. You just gotta go. And then it’s like, “Okay, what do I need to fix?” They’ll say, “Relax your shoulders, don’t swing your hips, don’t swing your arms, don’t bounce.”

WWD: What’s the weirdest thing you’ve done on a photo shoot?
N.M.: It was a test shoot, my first time here, and we were wrapping up. The photographer turned on the lights, and was like, “Wait a minute, I’m gonna go get something.” So he pulls out this vacuum. It was a Dyson. He wanted me to pose with the vacuum. I did it for 10 minutes. I haven’t even seen those pictures. But to this day, I’ve never heard of a vacuum on a shoot.

WWD: Do you have any role models or girl crushes in the business?
N.M.: I can’t say I have any favorite models. But I love Natalie Dormer, Jennifer Lawrence and Helena Bonham Carter. They’re all so out there.

WWD: What are your goals?
N.M.: I’m gonna see how fashion week goes. That will decide if I go to college next year. If I kill fashion week, then I’ll continue. If I wasn’t modeling, I would definitely teach…high school English, probably.