Walking in her first New York Fashion Week, the Dutch newcomer has been nabbing some big shows. 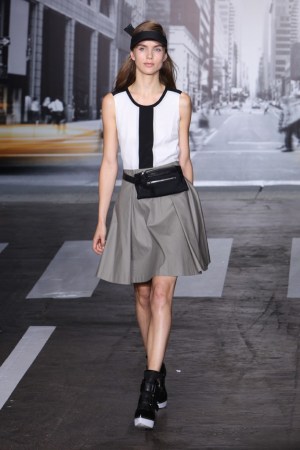 Walking in her first New York Fashion Week, Dutch newcomer Odile Coco has been nabbing some big shows — DKNY, Erin by Erin Fetherston, Jenni Kayne — despite a few mishaps with the MTA. “A couple of times I’ve ended up in Queens instead of Times Square,” the leggy 19-year-old says. “I don’t know Queens and I’m sure it’s quite nice, but I don’t feel comfortable walking around in my heels there.” Coco, who switched to Muse Model Management just three weeks ago, managed to grab the right train in between shows to talk all things fashion week.

WWD: This is your first New York Fashion Week — how did you go from the Netherlands to New York?
Odile Coco: My sister [Marthe van Stuijvenberg] was a model. I went to her first test shoot, and the photographer was like, “Jump in.” It’s funny because we’re total opposites. I’m sort of narrow, and my sister is like a goddess — all the guys stare at her. There was never a rivalry between us because we’re in such different markets. I was doing CosmoGirl when she was doing Cosmopolitan. She never did fashion week, so she’s really happy for me. She is studying to be a primary school teacher now.

WWD: What’s your first impression of the city?
OC: I actually posted on Facebook the other day, “There are so many weird people in NYC.” I’ve had random people in the street just be like, “Oh, you look like a model,” and take my photograph. When I’m on the streets, I don’t even think about that. For castings I do, but for the rest of the world, I don’t care. But I’ve seen tutus, sneakers, red wigs. And that’s what you see at the presentations when you’re standing there for a half hour. I people-watch, for sure.

WWD: Any problems fitting everything in with such a chaotic schedule?
OC: Yesterday I was doing the presentation for Gregory Parkinson, and the hair and makeup was quite dramatic. My hair was massively back-combed, and I had pink on my cheeks up to my forehead. Right after that, I had to go to the DKNY casting. They like hair down, simple and nice. How am I doing that? First I just tied it in a bun, but then I tried to brush it out, and it was a mess. But whatever, they still liked me. My friend Julia [Step] told me that once she went to Calvin Klein with, like, green jelly in her hair, so that made me feel better.

WWD: Have you made friends with any models?
OC: I’ve met some girls, and I already knew some, like Melissa Tammerijn. Our boyfriends are best friends, so she’s been mentoring me. We just bumped into each other at Narciso Rodriguez [casting], so she was giving me advice. Some models, like Freja [Beha] — that would be awesome. Nimue [Smit] and Daphne [Groeneveld], they’re my age, and I find them so cool because they’ve done it all. I’ve met some really cool people. Alex Ludwig, who is in “The Hunger Games,” was part of an Abercrombie shoot I did. I saw the trailer and was like, “huh, I remember him.”