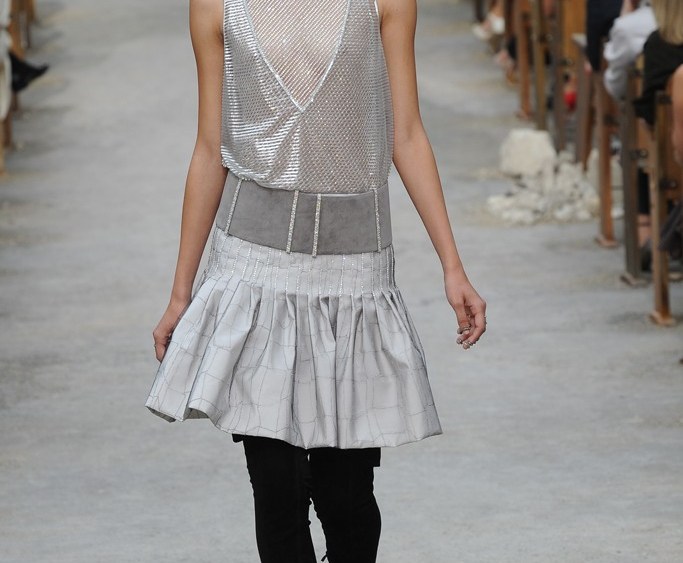 Temperatures in the city may indicate it’s only midsummer, but for the fashion set, September — meaning New York Fashion Week — is right around the corner. Just ask Pauline Hoarau, who can’t help but be honest.

“I can’t say that I’m excited,” says the 19-year-old of the upcoming fashion show marathon. “But I am prepared for it. I am ready to do it.”

Two years into her career and now repped by The Society, the Reunion Island, France-native has already stomped the runways of top designers including Louis Vuitton, Miu Miu, Chanel and Valentino.

The 5-foot, 11-inch brunette sat down with WWD to talk runway and more.

WWD: What was your first fashion week like, back in 2012?
Pauline Hoarau: I did Louis Vuitton and Miu Miu. Those were the two big shows. The Louis Vuitton show was really amazing, with the train. I really loved that show.

WWD: Were you completely overwhelmed by the size of that show?
P.H.: Yeah! When I saw Marc Jacobs, that was my first time seeing a designer. He was talking to me, like, “Oh, hey! I’ve never seen you. Are you new?” It was so weird for me.

WWD: What are some of your favorite shows that you’ve walked in?
P.H.: Louis Vuitton was one of my favorites. And the Chanel show, too, because it’s really big and really different every time. Every time you do [Chanel] you know it’s going to be something amazing.

WWD: When was the first time you worked with Chanel?
P.H.: The first show was the one with the….I don’t know how to say it in English. It was big.

WWD: The one with the windmills?
P.H.: Windmill! Yes! That’s it. I really love working with Chanel. It’s kind of the best, so I’m so happy that I got to work with them again.

WWD: You just did the Chanel couture show a few weeks back, right?
P.H.: Yes. It was the theater, kind of like another world. It was really nice. And now lots of the girls in the show are my friends, so it’s a really nice mood.

WWD: Is it easier to do shows now that you know the other girls?
P.H.: My first season I didn’t really know many girls. You just arrive and they all know what they’re doing, but you don’t really know. But fashion week after fashion week, you see the same girls and you make some friends.

WWD: What is the best experience you’ve had because of modeling?
P.H.: The coolest is traveling because I’ve been to some amazing places, like Shanghai. I would have never gone there. I went to Miami for one day. Miami for me is like, “It’s Miami!” You hear about it on TV. It was so cool.

WWD: Is there anywhere that you’ve never been but are dying to go?
P.H.: I’m dying to go back to Miami.