Rachel Finninger, the 21-year-old Dallas, Texas native, proved a breakout face this past resort season and continued to impress during Paris couture week. 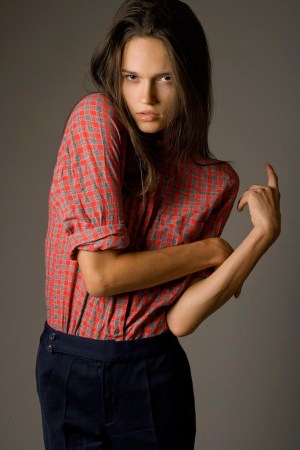 Rachel Finninger, whose high cheekbones and olive complexion owe to a German and Native American heritage, was a breakout face this resort season: She starred in Altuzarra’s look book and walked the Calvin Klein and Gucci cruise shows in New York. The 21-year-old, hot sauce-loving Dallas native also nabbed the Valentino, Dior and Elie Saab couture shows in Paris last week. “There’s an adrenaline about it,” she said of the runway. “It’s live action.”

Rachel Finninger: I got scouted by an agent in a shopping mall. It wasn’t the agency I ended up signing with, but it sort of sparked my interest in modeling. My mom had always told me, “You should be a model.” And I would be like, “Well, you’re my mother; you’re supposed to say that.”

WWD: How did your career take off from there?

R.F.: I grappled with going to university. I wanted to do something with animals, then psychology, and then I thought maybe I could marry the two. But I got my bachelor’s in business, marketing and finance — something I can use in any field. I modeled locally in Texas for a while, but it was uneventful. There isn’t much commercial or high fashion work there. I thought maybe modeling was something I should take seriously, so I moved to London for a year. I was doing more editorial stuff there. I’ve been modeling pretty seriously since September; I came to New York for fashion week.

WWD: Has your style evolved since your Dallas days?

R.F.: A lot of people, before they hear me speak, they think I’m French, which I love, because I think my style is very European. Dallas is, like, the Beverly Hills of the South; it’s all big, blond hair, and the style can be very overdone. My style has evolved into being more demure and understated. I’m into wearing black, and I think moderation is key.

WWD: Tell me about your big resort season.
R.F.: I walked Gucci cruise, and I love what Alessandro [Michele] has done with the collection. He completely unearthed everything. He made people stop and think. I also did Calvin Klein; Francisco [Costa] is so down to earth and lovely. He’s very self-assured in that he knows what he wants and knows what he’s doing. His team was super well-oiled. I also did the Altuzarra look book and presentation….I was like, “Wow, this is real. This is happening.” I was so honored.

WWD: You also spent some time modeling in London.
R.F.: Yeah, I lived in London for the past year. London is my favorite city in the world. I went there to model — I’m with Storm agency over there. I worked really well, stayed for a year, ended up dating a guy in London and still am. I came to New York for fashion week and ever since then I’ve been grinding. My parents are so supportive, they’ve been amazing. A lot of the time, in the Southern states, they don’t want you to leave. But my parents have been like: “Get out, explore; you’re young, do your thing.”

WWD: Now that you’re living in New York, what are some of your favorite things to do here?

R.F.: I live in the East Village, and I love to try little hidden spots like dive bars and restaurants. I love those secret little gems; I’m always searching for those. I like seeing films, especially indie films. I like biking, hiking and anything active. I get restless if I sit in one place for too long.

WWD: How do you use Instagram to leverage your career?

R.F.: I think Instagram is invaluable. It’s a tool that we have at our advantage that models even six or seven years ago didn’t have. It’s a way to take our career into our own hands and gives models more personality. It makes you more multidimensional. I try to show a little bit of me, because I’m a little quirky. I’m interested in different things besides fashion. I love food; I’m a big bruncher. I like to share that with people.

R.F.: Acting is a huge passion of mine. I’ve been doing it for a while. In my teens, I was in and out of Los Angeles for auditions. Right now, I’m running full-speed with modeling because it’s here and now. But acting is something I’d love to pursue long term, and modeling can be a great segue. I’d love to live in England one day, but I’m up for anything; we’ll see where the wind takes me.