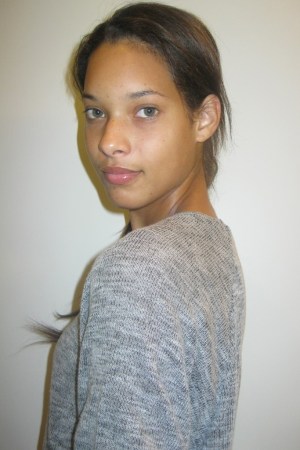 Rainey Forkner may be a New Yorker these days, but the 18-year-old is still a California girl at heart. “I love California dearly, and I have to say that I like it better than [New York],” she says. “I like the coastal area and the beaches. I kind of feel like SoCal beach chick.” Gearing up for a chilly New York autumn, the New York Model Management-repped brunette, who’s fresh off a plane from London Fashion Week, chatted with WWD.

WWD: You just returned from London. What was that like?
Rainey Forkner: I did two shows — Mark Fast and Math Collective. It’s very fast paced and crazy. You see all of these people on the street, and they’re all trying to get somewhere. There are heels everywhere, and the Tube is just painfully slow. Plus, our models’ apartment had like insects infestation in there, so it wasn’t the best.

WWD: Did you have time to do any sightseeing?
R.F.: I tried to get in some karaoke and a salsa lesson, but it didn’t happen. I love to put on a performance for people. I’m an adrenaline junkie. I surf, I skateboard and I snowboard.

WWD: How do you get your adrenaline fix in New York?
R.F.: I don’t. I don’t have a license, so I can’t even rent a car. My friend at the agency found this Web site, Dream Cars, where you can pay to drive expensive cars four times around a track. I’m a huge fan of like Lamborghinis, so I have motivation to get my license. I borrow my friend’s skateboard to go to castings, but it didn’t work out the way I planned. You walk in with skateboard and heels and all this stuff to carry, plus your hair looks like a mess.

WWD: What does your family think about your work?
R.F.: I booked Teen Vogue, and my family went crazy when the magazine came out. They bought like 17 [copies]. My mom embarrassed me so bad at the airport. She saw my picture, and she just had a cow. She was jumping up and down and saying, “That’s my baby” to random people. They were like, “Kudos, you know, whatever.” So embarrassing — and this was at JFK.