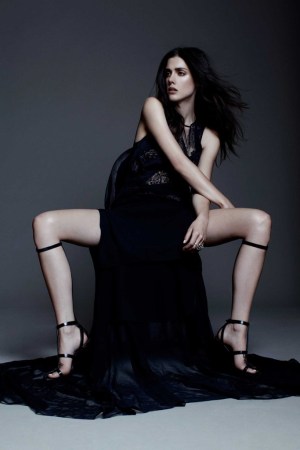 Taking her seat for an interview at WWD’s offices, it takes Raquel Nave about 15 seconds to realize that she has left her portfolio at home. Luckily, she can do one better. “This is Eagle,” the 26-year-old model says, proudly showing off a picture of her two-year-old daughter. “She’s a killer. She is so exhausting, but she’s awesome.” Here, the San Francisco native, now repped by Root Management, talks motherhood, modeling and more.

WWD: Has it been difficult to balance modeling and motherhood?
Raquel Nave: It took me a lot longer to get back than I thought it would. I think you have this idea in your head, “Alright, I’m going to have the baby and three months later I’m going to be in shape.” But you are nowhere near the right headspace. You don’t even know what your name is. And also, she wouldn’t take a bottle. Even if I tried to do a job for a day, she’d go on strike. I had to really wait to get back into [modeling.] First of all, to just be in the right headspace, and also to make sure she’s eating.

WWD: Did you feel pressure to get back in shape immediately?
R.N.: No, I was so into my experience of becoming a mother. You’re really giving your body a chance to reset itself and heal. It was a chance to just listen to my body and give it what it needed. I didn’t work out or try to eat healthier for the first three months. But when you breastfeed, it sucks all of your weight off. I was skinnier after I had the baby than before.

[She took it slow for more than a year after Eagle was born, and has become serious about modeling again in the past six months.]

WWD: How did you first start modeling?
R.N.: I was studying acting and a student photographer came in to the Starbucks where I was working, and asked me to model for her. So I did and we just kept shooting and shooting. Eventually my friend sent me to an agent and I started in San Francisco, but I came to New York pretty much right away. I was like, “If I’m going to do this, I want to go to New York.” I bought myself a ticket and started to go around to agencies. I moved here a few months later.

[Nave started modeling at age 17, came to New York, secured an agent and moved to Paris soon after.]

WWD: Did you know anyone in the city?
R.N.: I knew one person — this Russian ballroom dancer I had met in San Francisco on a movie set. It was the most random person. I had to crash with her family when I first got here.

WWD: What is the best advice that someone in the industry has given you?
R.N.: It was from an older model, and it was when I first got to Paris. She said, “Keep that light in your eyes.” It’s so easy to get carried away by the industry and the excitement or people. You need to keep yourself and stay strong. People can want a lot from you or try to take advantage of you. That’s what’s so sad about so many girls starting so young — you haven’t had a chance to grow into yourself yet.

WWD: How have you changed since you started modeling?
R.N.: It’s like I had my second set of punk rock years when I moved to Paris. I was still growing up and growing into myself. I cared more about having fun and going out — going to metal shows, going to punk shows and whatever. I didn’t care about getting sleep before a job. You can do that when you’re young. You look back later and think, “I should have been more responsible.” But it was part of growing up. You need to have your fun and grow up.

WWD: What is “fun” for you now?
R.N.: I make it out from time to time, but what’s more fun for me is to be creating and working. When you have a kid you have so little time that you have to know what you want to do. I’m studying acting again and I have this small part in a movie called “Welcome to New York,” starring Gerard Depardieu. That was so much fun for me. I think that’s the stuff that’s really fulfilling at this point.

WWD: Are you worried about the model-slash-actress connotation?
R.N.: Totally. I mean, you’re confronted with that on a daily basis, especially when you are making art as well. I’ve confronted that a lot, but that’s why you have to work extra hard to prove yourself. You need to be focused and strong in what you’re doing. But I welcome that challenge.