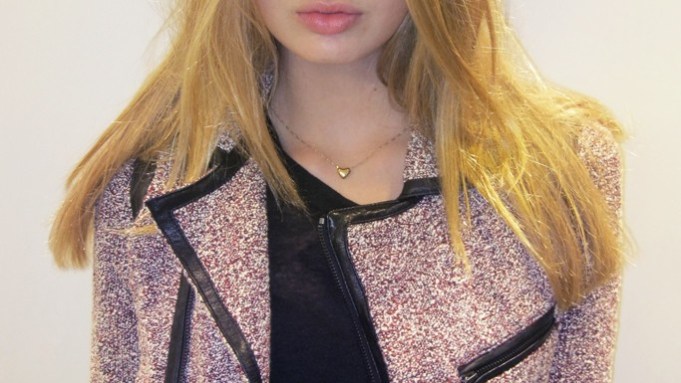 Romee Strijd had a pretty sweet 16. “I had to wait to really work until my birthday, which was July 9,” says the DNA-repped blonde. “They said I was too young to do shows.” Once July came, Strijd took the September runways by storm; first walking for Christopher Kane and Burberry in London, then Prada and Jil Sander in Milan, rounding it out with a host of top shows, including Louis Vuitton, Yves Saint Laurent, Celine and Alexander McQueen in Paris. We sat down with the Dutch model just after finishing her very first New York Fashion Week, where she walked for Prabal Gurung, Rag & Bone, Michael Kors and Vera Wang, among others.

The New York shows are over. How are you feeling?
I’m a bit tired but otherwise OK. I loved being in New York. When I’m walking down the street, I’m looking everywhere. I just want to take it all in! I’m staying in Fort Greene, Brooklyn. It’s so nice to see a completely different side of New York — the quiet part.

Fort Greene is a bit of a trek. Did that make you late to your shows and castings?
We get a car, thank God. But it’s still a long ride. The driver usually picked me up at six, which means I had to get up at half past four.

This was your first New York Fashion Week but you have done many shows before that.
Yeah, but you still get nervous. You feel like you might forget how to walk properly. My very first show was Burberry in London. I had only done much smaller shows in Holland. They have a fashion week but it’s very different, much smaller. I remember at the Burberry rehearsal they all were walking so fast. We didn’t do that in Holland!

What was your favorite look that you wore on the New York runways?
I loved the look for Rag & Bone, and the very cool boots. At J.Mendel I got to wear this absolutely beautiful dress and Michael Kors’ fur was amazing. I can’t decide!

Was anything you had to wear uncomfortable?
No, but before Edun, my heel broke while we were all in line! I was the sixth look and we had to start the show. I didn’t know what to do. I was panicking! But they got me new shoes in time, like right before I went out to walk.

So what’s next for you?
An eight-hour flight to London. Most people don’t look forward to that but after these past few days, I’m so happy to be able to just sleep and watch movies for eight hours. Then off to Milan and Paris!

Are there any designers in Europe that you really want to walk for?
I love Isabel Marant, which I did last season, so hopefully I can again. And I’d love to do Louis Vuitton again. Vuitton is just so chic.

Was that whole set intimidating?
The carousel looked so cool but when we did the rehearsal, we had to walk from the horse so elegantly. I was one of the last looks, so it was a lot of going up and down and up and down and around. I was a little dizzy so it was confusing exactly where to walk. The Louis Vuitton choreographer was, like “You got it? OK? It’s pretty simple.” I was so scared I was going to mess up.

What will you do when the fashion season is over?
Go home, see my friends, see my boyfriend. There’s ice-skating on the streets of Amsterdam. I just want to do that and drink tea, maybe watch movies. Simply chill!