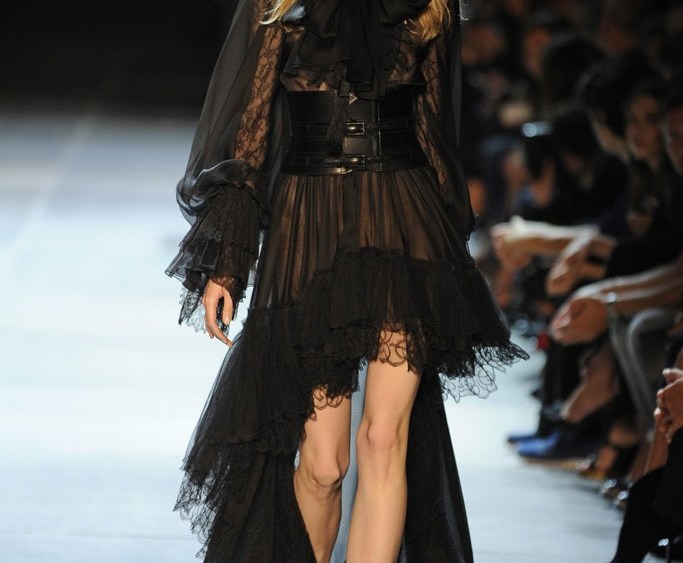 Now that Paris Fashion Week has ended, 21-year-old Saara Sihvonen is fully recharged after a quick trip home to Finland. “I got to sleep in my own bed, which was amazing,” the Supreme model says. “Plus, I ate my favorite Finnish foods — rye bread and salty licorice.” Between fittings for New York’s Bridal Fashion Week, the lithe blonde sat down with WWD to discuss her impressive fashion month run.

WWD: You walked in Hedi Slimane’s debut for Saint Laurent — what was the casting process like for that show?
Saara Sihvonen: Hedi is amazing. He’s a talented person and so nice. He did the casting by himself. There were some other people around, but he was the main character. Usually it’s the casting director, but basically it was all Hedi. I had a good feeling about [booking the show] because he told me I had nice hair.

WWD: Did you get nervous before walking in such a buzzed-about show?
Sihvonen: I get nervous in a good way. In the moment, it’s only me and the clothes. But afterwards, I was checking the pictures from the show online and I saw everyone in the front row. Everyone. I’m so happy that I didn’t see that beforehand because then I would have been very nervous.

WWD: Did you get to work with anyone else that you had been dying to meet?
Sihvonen: I love to see Riccardo Tisci and to watch how he works. He’s a very nice person, as well, and I can’t believe he’s doing everything by himself. Also at Givenchy, I saw Joan Smalls. I was so happy to see her in line because she’s been doing amazing. She looked really beautiful. I saw her and thought she totally deserves her place right now.

WWD: What was it like getting your eyebrows bleached for Givenchy?
Sihvonen: We had to be there early, maybe five or six hours before the show started. It was an easy process though. They had a certain product to bleach them, and after the show, they put our color back. The girls who had very dark eyebrows looked amazing and almost creepy. You couldn’t recognize them. I’m so pale that I looked like I had some sort of illness.

WWD: Was that the craziest hair and makeup that you had this season?
Sihvonen: I think so. This season the looks were very natural which was great. At Theyskens’ Theory, we wore a wig, so they put a treatment on our natural hair under the wig. Basically, we had really amazing hair afterwards. It was so good for us. Usually they straighten and blow-dry, but no, a treatment! I was like, “I love you.”