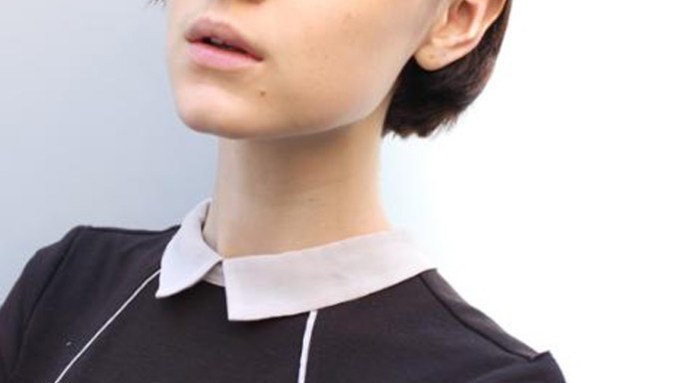 Very few people can pull off a bowl-cut — Sarah “Doug” Douglas (a childhood nickname-turned-modeling-moniker) is one of these people. It’s her too-cool-to-care attitude that caught the eye of Hedi Slimane, who cast the Newcastle, England native as an exclusive for Saint Laurent’s spring runway show. But don’t let the quirky do, not to mention that killer stare, scare you — by her own admission, Doug is just a normal, fashion-loving 18-year-old.

“I would love to do some work for Burberry just because they are the epitome of British fashion,” she says. “I really, really like their clothes. For my birthday, my parents got me a Burberry trenchcoat. It’s my most treasured piece of clothing. I wear it all of the time and I’m so particular about getting it dirty.”

Just out of a lecture at the University of London, where she is studying psychology, the Premier-repped model jumped on the phone with WWD.

WWD: How did you get your modeling start?
Sarah Douglas: Basically, Premier did a competition and partnership with a train company called East Coast and scouts came to the Newcastle train station. I was actually busy that day, but my dad took a picture of me down to the train station and said, “Would you be interested in her?” It just went from there, really.

WWD: Did you know that he was doing this?
S.D.: No, he didn’t tell me. He mentioned it later that evening.

WWD: What was your reaction?
S.D.: I was like, “Oh, yeah? OK, that’s cool.” I didn’t really think anything would come of it.

WWD: And how did it take off from there?
S.D.: I went down to Premier, and they decided they wanted to take me on. From that point, I just did lots and lots of test shoots to build up my book.

WWD: Did being in front of the camera come naturally to you?
S.D.: I think I was probably very stiff at first. I was a bit like a wooden board or something, but with encouragement, I got a bit more relaxed. At first you think, “This is how people model,” because you’ve seen things like “America’s Next Top Model.” Then you realize it’s actually a lot better if you are more natural, and you just sort of relax and do your thing. That was the main learning curve for me.

WWD: How did the exclusive with Saint Laurent come about?
S.D.: I was going to do London Fashion Week, but then I went to the YSL casting and got the exclusive. For the first season, it was really good for me to be able to concentrate on just one show. I really loved the styling. I loved the clothes. I loved the music.

WWD: What was that first casting like?
S.D.: It was funny because I had been doing walking lessons all summer with Premier, and I sort of had this walk that I could do. I did that walk [at the casting], and they said “Oh no, can you just walk as if you were walking down the street?” I just kind of stripped everything that I had learned and gave that a go. It actually felt a lot more comfortable just being able to do my own thing without worrying too much about walking a particular set way.

WWD: And how was it working with the Saint Laurent team?
S.D.: It was a really nice team. There were quite a few girls who were booked on an exclusive, and it was their first season as well. They were of a similar age to me and we sort of shared this excited buzz of our first-ever show, which was really nice. They were just as nervous, but just as excited, as me.

WWD: How did you do backstage before the show?
S.D.: I was really, really nervous before I went on. I was like, this is a once-in-a-lifetime experience and I don’t want to ruin it for myself by being nervous, so I might as well enjoy it. [Backstage], I was pretty star-struck to see Edie Campbell. I can’t really put it into words. It’s just kind of a very surreal experience to see somebody that you’ve seen so much in publications in the flesh. She’s really nice and down to earth.

WWD: How did your friends react to the news?
S.D.: I hadn’t told anyone before I went to Paris because I heard about girls getting pulled out of the show in the lineup. I didn’t want to get my hopes up until I was actually on the catwalk. But then my booker had put a picture up on Facebook, so my friends saw that. My flatmates at uni made a “welcome back” sign for my door, which was really nice.

WWD: Was it difficult to go back to school after the show?
S.D.: It was a little bit crazy. I did the show Monday night and I had a lecture at 11 the next morning so I got the first Eurostar back to London. It was surreal because I still had such a buzz but I was just at uni, doing what everyone else is doing. It was really surreal.