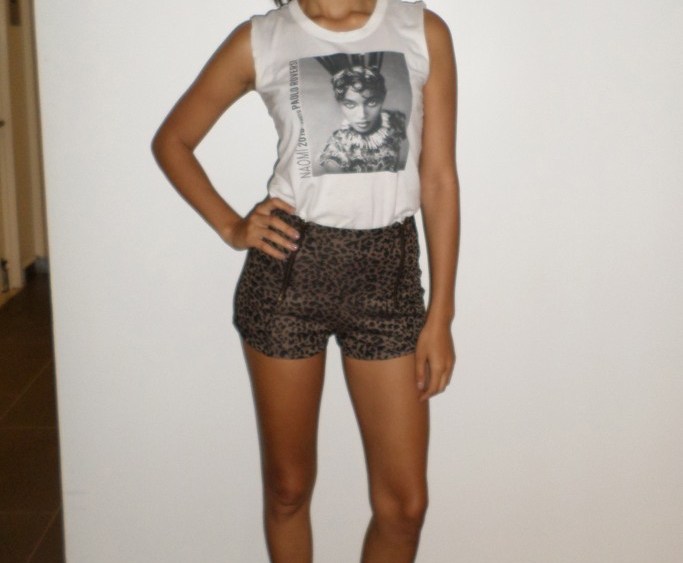 After walking in two consecutive Victoria’s Secret Fashion Shows, the whole “showing up to work in your underwear” nightmare doesn’t exactly apply to Australian model Shanina Shaik. Her fears are more of the “Jaws” variety.

“[For Australian Vogue], I did a surfer story, and I don’t surf,” the 22-year-old says. “I have a fear of sharks, but I booked the job anyway. I was like, ‘OK, I’ll just be laying on the board.…’ Later, the photographer’s assistant told me that there had been a shark sighting. It was a long day.”

Battle wounds and shark scares aside, Shaik has no complaints about her recent jobs, including the cover of Lurve magazine.

The Next-repped model stopped by the WWD offices on Monday morning to talk Beyoncé, Bieber and backstage at Victoria’s Secret.

WWD: How was your weekend?
Shanina Shaik: I just got a new puppy, a black French bulldog. I’ve been looking after him. He’s only 11 weeks [old]. Today is his first day by himself so he was crying when I left. Poor thing.

WWD: Do you live with a roommate?
S.S.: I’m by myself. I got my new doggy so I’m not really by myself. I have my company with me. But I travel a lot, too, so I’m really happy at my own place. I’m always in and out and never there.

WWD: Where have you been recently?
S.S.: I’ve been, like, everywhere in the last week. I’m so happy to be in New York right now — Australia, Paris, then I had to come back to New York for work. And then I had to go back to Paris for another job. But I travel a lot. Like, at the start of next month, or the end of this month, I’ll be in Ibiza and Bora Bora, which is not bad. And then Australia.

WWD: Do you stay at your parents’ house when you are working in Australia?
S.S.: I stay at home. I’m a homebody. I just like to stay home and go out with my mom.

WWD: Do you have any siblings?
S.S.: I have one full brother and two half brothers. They’re all younger than me. My six-year-old brother likes when he gets to see me on the commercials in Australia. He gets excited about it. And then [the] older brother, the only time I really felt like he liked [my modeling] was when I did the Victoria’s Secret shows.

WWD: Where were you when you found out that you’d been cast [in the 2011 show]?
S.S.: It was Halloween night and my agent played a trick on me, which wasn’t nice. He rang me and told me other jobs that I had to do that weren’t that exciting. And I was like, “OK, yeah.” OK. Yeah. And then I was about to ask if he heard any news from Victoria’s Secret, and he goes, “And tomorrow you have your fitting for the Victoria’s Secret show.” I was like, “I won’t forgive you for that.”

WWD: How did you feel going into your first show?
S.S.: I was a bit nervous, but I had fun with it. I was quite relaxed when I went on because it was all about enjoying myself but people were saying in blogs and everything, “She blew too many kisses!” People don’t know that it’s cut and edited, too. It’s not because I blew so many kisses. I probably blew two or three.

WWD: How did your second show compare?
S.S.: I was much more relaxed because I knew what to expect. I did two segments. One of them was with Rihanna. You get so excited. One of my favorite Victoria’s Secret shows was the Justin Timberlake show. I was just like, “I want to do that, because I also love the music.” And I love Rihanna. She’s so nice. So cool. I think she gave us a run for our money too. She was like, “C’mon girls. Let’s step it up.”

WWD: And how was Justin Bieber?
S.S.: Bieber’s a cutie. He loves the ladies — like any 19-year-old teen with gorgeous supermodels in their lingerie. We spoke a few times actually.

WWD: How did it feel to put on wings for the first time?
S.S.: It was amazing. It’s a right of passage to do the big Victoria’s Secret catwalk with wings. And they were quite light, actually. I got lucky. Some of the girls can’t hold their wings and look like they’re about to fall back.

WWD: How has your career changed since you appeared in the show?
S.S.: I think a lot of models want to do Victoria’s Secret because it does become a turning point for their career. A lot of clients see you, and it’s also a place they see your personality, too.  So it’s changed my career and made other avenues for me. Right after the V.S. show I did the Chanel [2012 pre-fall] show in Paris. That was my first job in Paris.

WWD: How was it working with Karl Lagerfeld?
S.S.: It was a turning point for me in high fashion. It was quite quick how it all happened. My agent was like, “I need you to get in your bikini and do a video for the Chanel show.” And I was like, “In my bikini? For the Chanel show?” And he was like, “Karl Lagerfeld wants to book you. So we have to do a video.” It was such a big show. It was amazingly put together. I really love doing shows. I get an energy when I go into the show and wear the clothes.

WWD: You’ve worked frequently with Jason Wu. How did you meet him?
S.S.: I met him through my agent. They’re good friends. We get along really well and he calls me his muse. Usually when fashion week comes around I do all the fittings for his clothes before they go on the models. I enjoy it because it’s fun and I love to see all the beautiful clothes. I love his style — it’s just really sophisticated. He can be really sexy with some of the items but still keep that sophisticated feel to it. And what I love about Jason is that he really works to the woman’s body. He loves a woman’s body. He doesn’t love the up-and-down-stick-figure kind of look. He likes a little butt, a little boobs.

WWD: With so many high-profile jobs, are people starting to recognize you on the street?
S.S.: Yeah. People find out a lot of stuff about me and find pictures of me. I was just in Paris and I was walking to my agency and I was looking on my Instagram and someone had taken a picture of my agency from across the road. You could see it was zoomed-in. And [the caption] said, “I just saw you walk into your agency.”

WWD: That is really creepy.
S.S.: Also, in Australia, we don’t have celebrities. When I went to fashion week and I saw the celebrities for days in a row, I was like, “I can’t believe it.” I was kind of buzzed by it, but now I’m mellow.

WWD: Is there anyone who still makes you completely star-struck.
S.S.: Beyoncé. My boyfriend [Tyson Beckford] knows her and Jay personally. They’re really, really nice. So he has the access to Beyoncé, and I actually met her the night that I found out I got Victoria’s Secret. I was really starstruck. I didn’t know what to say to her.