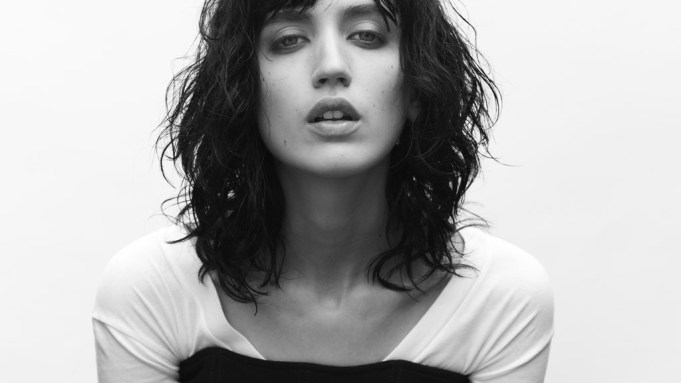 Before a month ago, San Pedro, Argentina, native Sofia Fanego had never been to New York. Now living in Williamsburg, Brooklyn, the 20-year-old model is blending right in with the locals. “I go with the flow,” she said — a phrase she frequently used over the course of this interview.

Example one: “In the street, I saw this guy,” she said, in heavily accented English. “So, then I went with him to some church, and it was a religion I had never heard of. The music was fantastic, and all the people were dancing.”

Example two: “The other day, I walked down the street and I heard some jazz, so I went to this jazz bar alone, and then, suddenly, I was playing the piano and making friends.”

Professionally, Fanego’s in town for her first New York Fashion Week, though she did some runway work back in Argentina, where she modeled locally for three years. Her strong suit is, thus far, editorial and campaign work. Whether blonde (the past) or brunette (now), her intriguing looks and body confidence fully command the camera. She has appeared in the pages of i-D, Harper’s Bazaar Argentina, Pop, Io Donna and Factice.

Fanego is 5-foot, 8-inches tall — a modest height for a model — though it should be noted that she turned up to WWD’s office wearing 5-inch-high creeper platforms on a busy day of castings.

WWD: How did you start modeling?
Sofia Fanego: My parents are farmers. In the farm town, it was difficult to be a model, but I would try some photo shoots with my mother, putting on makeup and stuff. Then I started school in Buenos Aires, the capital, which is more of a city. A casting director saw me on the street, and I met with an agency. I was 17. At first, my father and mother said, “No, Sofia, you are intelligent. You have to study.” So, I finished school first, and now I am here.

WWD: What was it like growing up on a farm?
S.F.: I was always riding a horse. My father has a lot of citrus fruits, and me and my sister were amazing at taking the lemons and oranges and putting them in the box. I have three sisters, all younger than me. One is blonde with green eyes, the other blonde with black eyes, the other dark hair with dark eyes. I’m [naturally] blonde, but now I’m more brunette. In my family now, I’m like, the dark sheep.

WWD: How did you end up coming to New York?
S.F.: At my agency in Buenos Aires, a scouter from One Management saw me and told me, “Sofia, you have to go to New York immediately.” I thought sure, maybe in two months or so. I go with the flow. But then a working visa arrived in a week, and they said, “You have to go to New York now.” I had a lot of pressure in my life in Argentina, but I had to say, “OK, this is an opportunity.”

WWD: What’s your life been like in New York so far?
S.F.: I live in Williamsburg, in front of the river. The air, the water — it looks like Argentina. My roommate is a dentist and travels a lot, so I’m alone a lot, and I relax in my place. I feel good.

WWD: You’ve done a lot of editorial work in three years.
S.F.: This is my favorite. I finish with a lot of energy. In Argentina, I did some runway. I did a lot of shows for brands. But here in New York, this is my first time [at fashion week].

WWD: What’s the best part of working on shoots?
S.F.: On a shoot, I prefer more craziness. I enjoy it a lot. I dance a lot — I did classical dance when I was little, but only for two or three years. I have a speaker with me always. I put my music on, and I start to dance and show the team my movements.

WWD: Do you enjoy fashion?
S.F.: I would see some [fashion] magazines back in Argentina, but I preferred to find my own style. I don’t buy brands because the brands that I like are really expensive for me, so I buy vintage clothes that are unique. I think this is more exciting for me. Fashion I like, but I do meditation, I do yoga… I have another life aside from fashion. Nature is my place.

WWD: Do you see yourself in this career for a while?
S.F.: It’s great to stay here. I need emotion. This is the feeling that I need, in New York. I’ve grown up a lot here in New York. There are a lot of things to do. If nothing happens with the fashion industry for me, it’s OK. I’m happy for the modeling, but I have a lot of things I can do, like cinema, art and painting.

WWD: What’s on your bucket list?
S.F.: I would like to fly. And I want to be an avatar. Did you see the film? It is really beautiful! I have a tattoo that says “Fly me to the moon.”