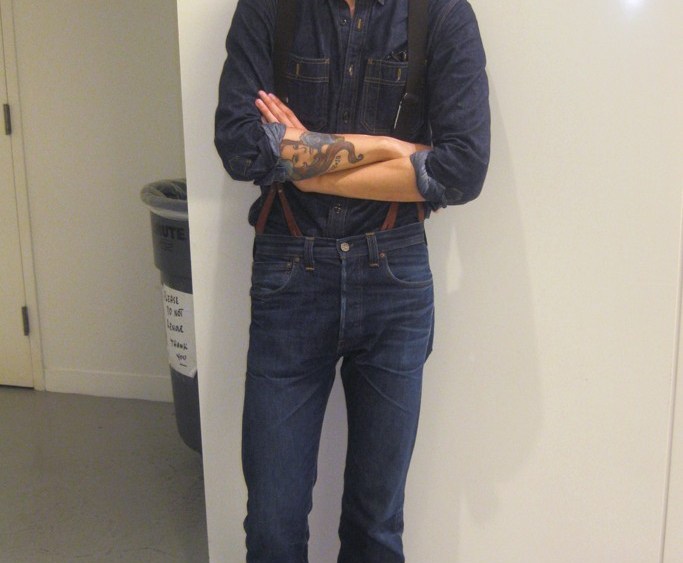 Dressed in head-to-toe denim, Sung Jin Park is quick to explain his signature look. “I like old rockabilly style,” says the 22-year-old Wilhelmina model. “I always wear denim on denim with suspenders and slicked back hair. Everybody usually looks so similar, so the photographers and editors all know now that I like this style. Most Asians don’t know about American street style.” Straight off an impressive first season, including walking for Marc by Marc Jacobs, J. Crew and Todd Snyder, the South Korea native sat down with WWD.

WWD: How was your first New York Fashion Week?
Sung Jin Park: Marc by Marc Jacobs was my favorite. The stage was so big, and there were so many people there. I had very bad vision during the show because I forgot to put in my contacts, but I didn’t fall or anything. Backstage was very crowded. There were photographers and stylists everywhere. All of the female models were smoking electronic cigarettes right before they went on [the runway].

WWD: What did you think of the clothes?
S.J.P.: I liked my outfit at Siki Im the best, with the leather. That’s similar to my personal style. In New York, you get lots of trade. Rad Hourani gave me a cool hooded parka. It’s a little too small, though…

WWD: What’s the biggest difference between doing a men’s wear show versus unisex?
S.J.P.: At the boys’ shows, there are pranks [backstage]. We hit each other and tease about girls. At the unisex shows, the girls just talk to girls, and the boys talk to boys. It’s separated. I never see any flirting, but [the guys] definitely want to try.

WWD: What do your friends in Korea think about you being a model?
S.J.P.: I have a lot of friends that are in the army, and [in the army] there are so many magazines just lying around, so they catch my pictures. I’m sick of it, though, because all of my soldier friends just want me to set them up with female models. I told them, “If you ask me one more time, I will block your number.”