She’s been working for three years, but it wasn’t until she recently chopped off her long blonde tresses that she started landing high-fashion runway spots. 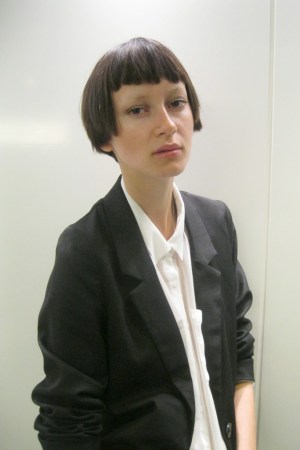 As Tatiana Krasikova can attest, a haircut can be a career-changer for a model. She’s been working for three years, but it wasn’t until she recently chopped off her long blonde tresses that she started landing high-fashion runway spots. The impetus was Calvin Klein’s fall show, for which Krasikova, who’s repped by Fusion, had to get a Lisbeth Salander-esque blunt cut. “My agency called me and was like, ‘You confirmed Calvin Klein but you have to dye your hair black and cut it all off,’” she says. “I was like, ‘Excuse me?’” Luckily, Krasikova, 20, went for it, and now she says she loves her new ’do. After Calvin, she went on to walk for Rick Owens, Mugler and Commes des Garçons in Paris (she had to skip London and Milan due to passport complications). “Everyone tells me I look more special, more edgy now,” Krasikova says. “But I’m like, come on, it’s just hair.”

Calvin Klein was your first big show. How did you feel when you found out you had confirmed?

I was so excited but I wasn’t allowed to tell anyone, not even my parents! They even closed the salon when I went to get my haircut because they were too worried someone would find out it was for the show.

Were you nervous about walking?

No, I was really calm, actually. It’s such a big production that people aren’t too stressed out. If you’re doing a small show, everyone’s running around and it’s disorganized but they had it all together. It was cool because they told me to walk a little differently than the other girls because of my haircut. They said to be more elegant because a stronger walk would be a lot with this haircut.

How did the Calvin show give you more momentum?

I think it put me on a different level, which I’m so thankful for. Like when I went to castings in Paris, they already knew who I was, like ‘Oh, you’re a Calvin Klein girl.’ And they remember me because my hair is totally different then other girls.’ But I’m not a nose-up kind of girl. I’m very grateful for all the opportunities I’ve had. I was raised like that — you have to be like that where I come from.

Where are you from originally?

Omsk, a small village in Russia. My parents had normal jobs and they couldn’t really give me a great education. There weren’t really a lot of opportunities, but I was in the park one day with my friend and a scout approached me. Two weeks later I was in Tokyo. I never thought I’d leave Russia; I mean, we didn’t even have enough money to go visit Moscow because it was too expensive. And now I was in Japan! It completely changed my life.

It was really overwhelming. There are people everywhere. Even just crossing the street is crazy because everyone is going every which way. And the metro is crazy. That’s what you have to take for all your jobs and it’s very confusing. You don’t understand what the words say. It was hard. There were definitely a lot of moments when I had to say to myself, ‘Tatiana, just calm down. You have to enjoy this experience.’

You moved to New York a year ago. How do you like it?

I always dreamt of coming to New York when I was little. And when I was in Tokyo they put me with girls who didn’t speak Russian so that I could learn English. Thank God for that!

What have you been up to since fashion month ended?

I just got back from Nigeria for a job. I was shooting an Arise magazine shoot there. It was kind of scary. We weren’t allowed to leave the hotel because it’s a bit dangerous. We had body guards. But we were in a nice hotel so it ended up being fine. At least now I can say I’ve been to Nigeria.