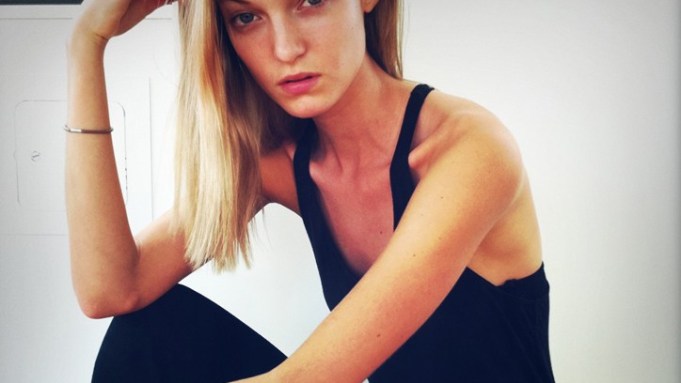 If life had worked out a little differently, Theres Alexandersson just might have been the most exquisite police officer ever to read you your rights. But destiny — in the form of Calvin Klein — stepped in, and Alexandersson’s modeling career was launched. This past fashion season, the powerhouse label booked her as a New York exclusive, and Theres took an impressive three turns on its runway. Her striking physical attributes — wide-set eyes, delicate mouth, long neck — give this Swede an almost otherworldly veneer and grabbed the attention of other illustrious houses, as well, including Alexander McQueen, Dolce & Gabbana, Lanvin, Jil Sander, Chloé and Viktor & Rolf. She also opened the No. 21 and Andrew Gn shows.

How did you get into modeling?

“In 2004, I was on holiday in New York when a model scout approached me and asked if I would like to try. Then I signed with my first agency in Sweden — the Stockholm Group. I did some odd jobs, but did not feel one bit interested. I thought I was too busy with school and football, so I decided to put modeling on the shelf in order to complete school. After I graduated, I decided to try two things and then continue with what went well. One of my dreams was to become a police officer. The second was to become a supermodel. So I [looked] into the police academy while I made contact with the Stockholm Group again. Modeling took off, and that’s how the story begins.”

Where you surprised by the Calvin Klein exclusive? What was that experience like?

“I was really surprised, oh, yes! I had just started modeling and I would have been glad to walk in just a few small shows in New York. But then I booked the Calvin Klein exclusive. It was one of the happier moments of my life, I would say! It was long days of fittings with CK, but I got the opportunity to get to know all these wonderful people. I’m very grateful for the experience. I also got the opportunity to watch the entire collection develop!”

And you had three looks in the show? Were you nervous at all?

“No, not at all…yeah right! I WAS SO NERVOUS! But in a good way. I had adrenaline from another world. I cannot explain the feeling I had when I walked out there!”

Being in so many high-profile shows this past season, you shared the runway with some of fashion’s most famous models, like Freja Beha Erichsen, Abbey Lee Kershaw and Lily Donaldson. What was that like?

“It was a bit weird. I’ve seen them all over the world, in magazines, on TV, yes — EVERYWHERE — and suddenly I was standing right next to them, walking in the same show. It felt amazing.”

What’s one thing you can tell people about modeling that they might be surprised by?

You have a tongue piercing. Do you have any others?

“I wanted one, so my boyfriend paid for it when I turned 18. Now, I don’t think about it that much. I also have my ears, belly button and nipple pierced as well.”

What do you do when you’re not modeling?

“I snowboard and hang out with my boyfriend and my friends. I love sports…and shopping.”

“I love Caesar salads and tacos.”

Do you have a favorite body part?

What’s on your iPod?

“I don’t own one. But on my iPhone, I have Eminem, Flipsyde, Regina Spektor, Kanye West, Sum 41, Rise Against, Yellowcard and some others.”

What are your favorite pieces of clothing in your wardrobe?

“It really depends on my mood. But I love my suit trousers from Jil Sander and my high heels from Calvin Klein fall/winter 2010 Collection.”

Are there any models you look up to?

“I think Freja [Beha Erichsen] is really cool. I love her tattoos. She seems to just do her own thing.”

Where do you look for fashion inspiration?

“Magazines and on the street. You can find inspiration for fashion everywhere.”

What’s the best advice you’ve been given?