From editorials in Malaysia to walking the Paris runways, the Trump-repped Russian model has acquired quite a bit of passport stamps. 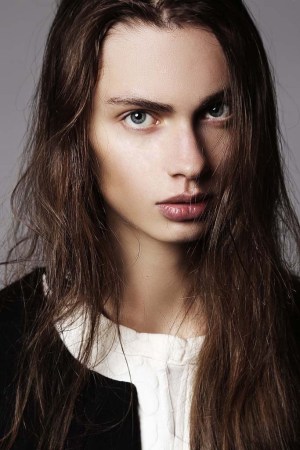 From editorials in Malaysia to walking the Paris runways, 20-year-old Tina Veshaguri has acquired quite a bit of passport stamps — and a food allergy.

“I went to Milan and I ate so much cheese that I got a milk allergy,” the Trump-repped Russian model says. “But now it’s my favorite food. You want what you can’t have…”

WWD recently sat down with Veshaguri, fresh off her debut New York season, where she walked the likes of Theyskens’ Theory, A Détacher and Delpozo.

WWD: Are you currently based in New York?
Tina Veshaguri: Yes, I spend most of my time here. I live in Williamsburg with two of my friends.

WWD: Are they also models?
T.V.: No. I don’t really like models. I don’t think that models are stupid, because I am also one. But it’s just always the same conversations.

WWD: How did you start modeling?
T.V.: I was in Russia, and an agent came up to me and asked if I wanted to try modeling. It’s kind of a simple story. I was 13, so I went to model school.

WWD: What is model school like?
T.V.: In Russia, it’s a special school where they teach us catwalk. You still go to normal school. It’s just for four months.

WWD: So was this season your first fashion week?
T.V.: In New York, yes. It was hard. At the time, I thought, “Maybe this is my first and last fashion week.” It’s really hard. There are so many girls, and everyone is beautiful.

WWD: What was the hardest part?
T.V.: To feel like you are one of a million. There are so many girls.

WWD: What was your favorite show?
T.V.: Theyskens’ Theory. I liked the girls they cast. At some shows, you are like, “Why is she here?” But I really liked the girls who were there. I liked the clothes. It’s really cool to do a catwalk in clothes that you like.

WWD: Did you receive any trade?
T.V.: No, they paid us. Most girls prefer when you are paid in money. Sometimes clients pay us in all trade, but we prefer money.

WWD: Were you interested in fashion before you started modeling?
T.V.: No. I went to model school because I was kind of like a boy. I only had boy friends. I wanted to learn to be a bit more girly, how to walk in heels — stuff like that.

WWD: Do you think you’ve become girlier?
T.V.: A little bit. When I got to New York, I realized people like it when you are both. Like, “Oh, you can look like a boy.”

WWD: What has been your favorite job overall?
T.V.: I think it was in Tokyo. I did a Nina Ricci show. For models, if there is good food, it’s like, “Oh, this is an amazing job already.” It was hot food, like meat and vegetables. It was almost like a restaurant. I love Tokyo. I’ve been there four times, and I can’t wait to go back.