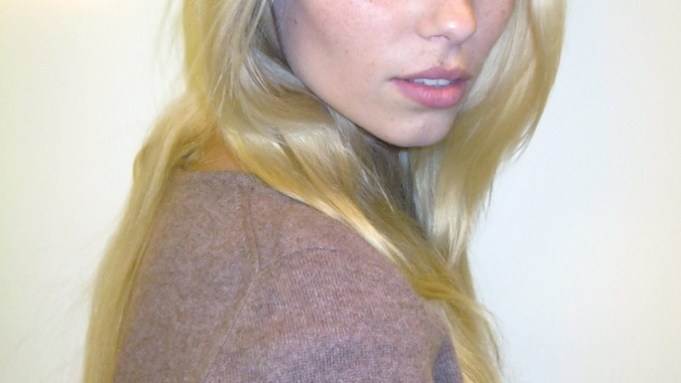 The third time was a charm for Vika Falileeva. After two so-so seasons, the leggy, fair-skinned blonde nailed spring 2012, nabbing nearly all the top shows, including Oscar de la Renta, Alexander Wang, Dolce & Gabbana and Marc Jacobs. And now the DNA-repped 20-year-old is transitioning into quite the campaign girl: she just shot them for Blumarine and Tommy Hilfiger, whose runway she happened to open and close as well.

How were you discovered?
There was a modeling competition in Irkutsk, where I’m from in Russia. I didn’t compete though. When I went and the judges met me they were like, “You don’t need to do this. You can just get signed now.” Then I came to New York last September.

Was modeling something you thought about growing up?
I was so skinny in school and always the tallest in class. Guys would never look at me. Then I remember I saw somewhere a video from fashion week and I thought maybe I can do that. Maybe I can be a model.

The fall 2012 shows are just a couple months away. Do you do anything to prepare for the chaos?
Sleep all day and eat a lot actually, because I lost like five kilograms last time. I was superskinny. You don’t have time to eat. We have castings, shows, fittings, refits, more castings, more shows.

What advice would you give a newcomer doing her first fashion season?
The most important thing is to know each designer and know how to present yourself to their unique taste because you have less than one minute sometimes to make an impression. You just give them your book and they ask you to walk so you have to think of what kind of girl they want and give off that energy. Like Calvin Klein is more natural and Versace is supersexy. The girls who want to do fashion week, they should watch the shows on YouTube to see how the girls walk differently in each show.

What was your favorite show to walk in?
Louis Vuitton. It was amazing. There were like 45 girls in the show and Marc Jacobs knew every single one of our names. He came up to me and said, “Hello Vika!” I was like, Marc Jacobs knows who I am?

You were in his own show in New York too, right?
Yeah, that was difficult. I was number 25 so right in the middle. We were supposed to count to three after the last girl started walking and then we could go but the way the lights were going, it was confusing. I was lucky though. I was just sitting in a chair and I was looking at the runway. Some girls had their back to the runway and still had to know exactly when to go. But he gave the best trade. I got this long pink coat, amazing. Alex Wang also had amazing trade. He sent us like 10 pieces each. I came to the agency and there was just this huge box waiting for me.

Most agencies are closing on Thursday for the holidays. Any exciting plans?
I’m going home for a bit, then I’m off to the south of France to go to a spa and rest. Then it will be New Year’s, the couture shows and fashion week again. It starts all over.