The third time was the charm for the 17-year-old Auckland, New Zealand native, who decided to look into modeling after being approached three separate times. 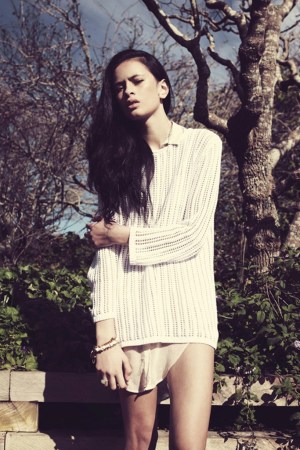 The third time was the charm for Yasmin Bidois. “I was scouted three times,” the 17-year-old Auckland, New Zealand native laughs. After being approached at the mall, then the movies, then the airport, the then-14-year-old gave in. “I was like, OK, might as well take a look at this,” Bidois says in her charming accent. After doing the modeling circuit in her home country, she signed with Ford and jetted up to New York. The towering brunette had a modest collections season in February, hitting eight shows in New York and skipping the European shows. “They didn’t want me to start out too full-on,” Bidois says. “But at Nahm I got to meet Tommy [Hilfiger] so that was pretty cool!”

Did you always want to model?
No, growing up, I wanted to be a vet. My true passion is animals. I have a dog at home named Wallace and I miss him terribly. I really wanted a puppy and my mom was like, ‘I’m not paying for it.’ So I sold my iPod and bought him.

Did you have any jobs before modeling?
Yeah, I had an after-school job at the movies. Great perks: free movies and half price on all food and soda.

You were modeling only in New Zealand for a couple years. How did you get hooked up with Ford here in New York?
My mother agency at home sent pictures of me, then they flew me to New York to meet everyone here. But they had already signed me after seeing my pictures so I was already in!

How did you feel when you first came to Ford in New York?
I was so overwhelmed because all the girls are so small here compared to the girls in New Zealand. The models here are much thinner. And the walk is totally different. In New Zealand, it’s more relaxed, it’s slower. So when I came here and went to my agency, they were like, “It’s a really, uh, sweet walk.” But I’ve learned. They told me to be strong and walk like I was a soldier.

Was that difficult?
I think I went into the agency three times and they make you walk for literally an hour. Up and down, up and down. But I have to say, my walk has gotten a lot stronger because of it.

How do you like New York?
When I first came here it was a bit scary and intimidating. New Zealand seems pretty small compared to a big city like this, but you get use to it. Just everything is different. Like in New Zealand, everyone drives everywhere. And then you come here and no one drives and you have to learn about subways. It’s so confusing, especially when you’re in a rush.

Has your family visited you?
My mom came with me when I came over in January. We went to Times Square and Madame Tussauds. I took so many pictures. They had George Clooney, Oprah Winfrey, all the people you see on TV. But, of course, the one day I go, they don’t have the Justin Bieber one? I was so angry.