The Russian beauty has built quite a résumé, having walked for Prada, Valentino, Chanel, Giambattista Valli, Alexander Wang and Elie Saab, among others. 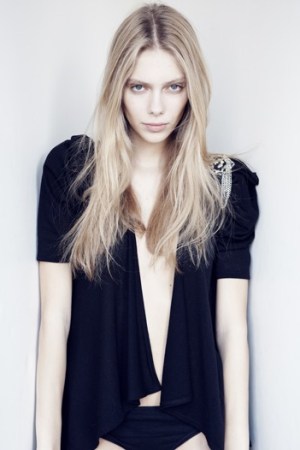 She’s barely 20 years old, but Yasmina Muratovich is no amateur. Since she was spotted by an agent five years ago, the leggy Russian beauty has built quite a résumé, having walked for Prada, Valentino, Chanel, Giambattista Valli, Alexander Wang and Elie Saab, among others. And, oh yeah, Miles Aldridge shot Muratovich in Valentino couture for Vogue Italia when she was just 17. But it hasn’t all been glitz and glamour. The weirdest thing she’s had to endure? Posing in arctic temperatures wearing little more than a wolf mask (more on that later). With her killer gams, flawless skin and 5-foot-10 stature — “Everyone called me ‘giraffe’ in school,” she laughs — Muratovich is hard to miss.

When did you first come to New York?
I think it was two-and-a-half years ago. I’m from a small city not far from Moscow; my grandmother still lives there. My father is from Bosnia and my mother’s family is from Germany, so I’m a mix. I’m based in Moscow and here.

How is New York different from Moscow?
I feel like I’m a city girl. Moscow is similar in that it’s a big city, but we don’t have so many high buildings. When I first came here, I didn’t understand all the blocks and all the avenues and streets. I was so lost and I just kept calling my mom being like, “What should I do?”

How old were you?
Like 17. But thank God I knew English so I could ask people for directions. I also have some family not that far from here. Some uncles and aunts from my father’s side are in Binghamton, so they visit me sometimes. They know that I can’t cook well, so they bring me some Bosnian food.

What’s Bosnian food like?
They put everything in pitas — meat, cheese, everything. It’s amazing. My aunt is the best baker. She never buys anything from the shop. She cooks everything from scratch, even bread.

How often do you go back to Moscow?
I’m still in university, so I always have to go back for exams. I study public relations. I’m going back next week just to do my exams and I haven’t even started studying yet. One week before, I’m always like, “OK, time to study.”

How did you get into modeling?
I always dreamt of modeling when I was young but I never thought I could do it. They have this teen magazine in Russia called Yes. I was like, I could never be on the cover of this magazine. Then my friend took me to a party for the anniversary of the magazine and a scout just found me. A year later, I was in Japan, and then when I got back, I got the cover of Yes. I was 15 and so skinny, I was like invisible.

What do you like to do when you’re not working?
I love to draw. I like to use…what is this word in English? Like when you see kids painting on the road with this?

Chalk?
Yeah, I do everything with chalk. I love to draw flowers. I also sing a little bit. When I was young I had a teenage singing group. We had three songs and we actually recorded them. I’m still singing in the shower. I also love to shop. I can’t stop! I always need something. I just bought this Alexander Wang peach dress, and I have the exact same one but it’s a different length, but I need both.

What are your favorite and least favorite parts of modeling?
The best thing and the worst thing is that you travel a lot. It’s the worst because you can’t have a relationship, because you are always all over the place. But I also love to travel. If I wasn’t a model, I don’t think I could have gone to Japan or New York at 17 years old. You also meet a lot of interesting people.

Who have you met? Were you starstruck by anyone?
I was definitely starstruck when I met Karl Lagerfeld when I did the Chanel show. I’m in love with him. He is so chic. I love his smell. All the models were trying to guess which perfume it is. I still haven’t been able to track it down.

What’s the strangest thing you’ve had to do during your modeling career?
I was on a shoot in Greece and they put this wolf mask on me. It was so cold, like minus-15 Celsius. I was in the forest with this wolf mask on, almost naked, and I was just thinking to myself, What the hell am I doing here? I called my agency and I was like, “Do you know that I am a wolf today?”