The Russian model scored the Calvin Klein and Céline shows as exclusives for the fall 2015 runway season — and recently shot editorials for Vogue Russia and Interview magazine — all cementing her status as a newcomer to watch. 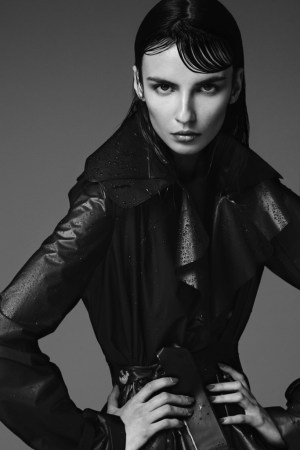 Yulia Ermakova scored a double coup with Calvin Klein and Céline exclusives for the fall runway season — and recently shot editorials for Vogue Russia and Interview magazine — all cementing her status as a newcomer to watch. But none of this was part of her big plan.

The 20-year-old model, who divides her time between New York, Europe and Hong Kong, played volleyball for 10 years before a friend convinced her to tag along to an agency in her native Russia — and she was signed on the spot. “After shows, I am the most happy,” said Ermakova, who is in Paris for Couture Week, where she walked the Ulyana Sergeenko show on Sunday. “When I see my pictures, I’m like, OMG, that’s me!”

WWD: Growing up, did people ever tell you that you should model?
Yulia Ermakova: All the time. I was so tall and skinny. But I never took it seriously. I was like, “I cannot have long nails, I’m a volleyball player!”

WWD: So how did you eventually start?
Y.E.: One day, my friend came over and said, “Can you take some pictures of me? I want to go to a modeling agency.” She wanted me to go with her, but I said no. I only liked volleyball and athletics. She said, “OK, just come to support me.” When we went [to the agency], they looked at her, then they looked at me, and I said, “Look, I’m just here for support.” But they signed me on the spot. My friend was happy for me. I was 15 at the time.

WWD: If not for modeling, what path do you think your life might’ve taken?
Y.E.: I think I would’ve been studying. I do study now, too: management and marketing. It’s helping me a lot with modeling. What they are teaching us, it’s kind of the same. You have to sell your face.

WWD: You spend a lot of time in Hong Kong. Tell me about it.
Y.E.: My agency tried to send me to Hong Kong twice, and my mom finally said I should go, but I didn’t want to go. The first time I went, I was such a baby. I was 16 years old. I was like, “I’m all alone in such a huge country!” I didn’t know anything about it. But I stayed for three months [for work] and was like, “I’m not leaving!” Everyone is my friend there, and I have my boyfriend there. He’s a DJ. It is my home sweet home.

WWD: How did you react when you found out you’d booked Calvin Klein’s fall show as an exclusive?
Y.E.: I didn’t know what to say; I had no words. I was standing there with an open mouth. It was my first season, and I had never done anything like that. Francisco [Costa] is so sweet. He would say, “If you want, you can go take a break.”

WWD: You also booked Céline as an exclusive. And they cut your bangs!
Y.E.: At first, I was scared, and then I got excited. I saw some girls with really short hair, and I was like, “Nooo, don’t cut my hair short!” I was almost crying about it. The bangs were weird at first, but now I like it.

WWD: What are your thoughts on Instagram? Have you found that it has helped your career?
Y.E.: I’m not the type of person who loves to post everything.…I cannot take 100 selfies. I feel so weird when I do a selfie. If I see something interesting, or if it’s my work, I’ll post it. But I’m not the type of person to post so many selfies; I’m more chill about it. Social media is becoming so popular. Sometimes, it’s too much.

WWD: What are some of your goals?
Y.E.: I know this modeling career might not be forever, and after that, maybe I want to be in a movie. Modeling does feel like acting. I want to have a shoot with Nigel Barker. And I want to meet Tyra Banks — she’s so dope. I want to do a big campaign, like for Prada…and I really want to get the cover of Vogue.