From her enviable brows to a wise-beyond-her-years eloquence, it’s easy to see what puts Colivas in such high demand. 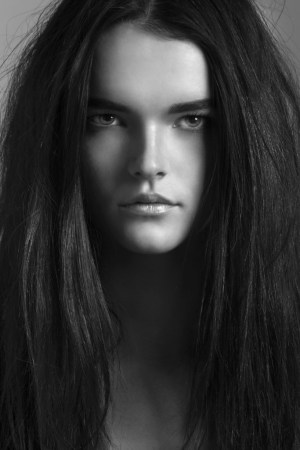 It helps to have friends in high places — just ask Zoe Colivas. She got her start as a model when she was 13 because her friend’s mother owned an agency, Sutherland Models. “I was too young at the time, but when I got older and started to talk to other agencies, I ended up going back to her. I just got a good vibe,” says the Toronto native, now 16 and still with Sutherland, her mother agency. From her enviable brows to a wise-beyond-her-years eloquence, it’s easy to see what puts Colivas in such high demand — and why she snagged a Prada exclusive in her debut season for spring 2013. Still living in Toronto, Colivas played hooky from high school last week to visit her New York agency, DNA Models. She made time in between castings and math homework for a phone chat with WWD.

WWD: Tell me how this Prada exclusive came about.
Zoe Colivas: I was working in Toronto, just doing editorials and Toronto Fashion Week, which is not exactly New York Fashion Week. I heard that I was an option for Prada, but a lot of girls are an option. When I got to Milan, it was talked about, but nothing is ever for sure in this industry.

WWD: How did you officially find out that you were cast?
Z.C.: I walked into the agency in Milan, and everyone was screaming. The casting director was really excited for me, especially because I was so excited.

WWD: What was backstage like at the show?
Z.C.: There were a lot of girls, which I never really thought about — how many girls there are. The night before I had my fitting, and I was there until 5:30 in the morning. The day was really exciting, with people rushing around. [To get to the runway], there was this huge line up these stairs, and I was so nervous, especially with the shoes.

WWD: What about the shoes?
Z.C.: They were big platform sandals, but not the ones with the socks. They were actually very comfortable. Some girls had the platforms with the socks, and some had just socks. I didn’t hear anybody complaining.

WWD: Did you get star-struck at all during the experience?
Z.C.: When I’m walking down the runway, I don’t see anyone. You’re in this weird tunnel. My dad always asks, “Did you see anyone that you knew [when you were walking]?” I’m like, “Dad, I didn’t look around to see if I knew anyone.”

WWD: Has it been difficult to balance school and work?
Z.C.: I go to a regular public school, so normally that would be hard to balance, but my teachers basically made a program around me and what I do. I’ve made them a part of it all, so they understand why I miss school. They have been really helpful.

WWD: Did you have any homework to do while you were in New York this week?
Z.C.: I had to do an art project — drawing three still objects. I drew scissors, nail polish and I still have to make a new one. It’s kind of a work in progress. I also had some math homework, but other than that I’ve been just watching “Gossip Girl” in the model apartment.

WWD: Do you know when you’ll be back in New York again?
Z.C.: [My agency] said that I’m an option for a couple of things, but I haven’t been told what those are yet. I’m heading home now to do some school and to celebrate Christmas. Now that I think about it, fashion week is around the corner. It feels like the last one just ended. I guess I should start getting ready.