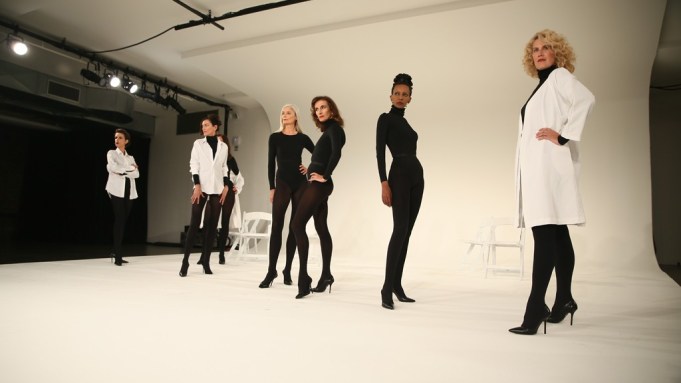 A fashion show without clothes — what business does such an event have smack in the middle of New York Fashion Week? A whole lot, according to Olivier Saillard, director of the fashion museum at the Palais Galliera in Paris. On Monday night, Saillard staged the premiere of his latest performance piece, “Models Never Talk,” at Milk Studios as part of the Crossing the Line fall arts festival.

The intention of Saillard’s piece, contrary to its title, was to give fashion models — those “creatures of silence,” he wrote in his program notes — a voice. The curator tapped seven former top models — a mix of French, Chilean, Spanish and Swedish heritages, all of a certain age — several of whom he had worked with before in his “Fashion in Motion” series at the Victoria and Albert Museum in 2012. Against a stark white backdrop and set to sparse instrumental music, Anne Rohart, Charlotte Flossaut, Axelle Doué, Christine Bergstrom, Claudia Huidobro, Amalia Vairelli and Violeta Sanchez took to the stage in black thong bodysuits, black tights and black Roger Vivier pumps. Using confident, dramatic gestures and words, the models recalled and reenacted their most memorable runway moments from the Eighties and Nineties, at times moving the audience to laughter and even tears. A group of fashion insiders made up the audience, among them Naomi Campbell, Caroline Issa, Lynn Yaeger, Susie Lau and Albert Watson.

The models’ reenactments ranged from the merely historical to the humorous to the scathing. Doué, a former model for Christian Lacroix, Karl Lagerfeld and Claude Montana, recalled when a certain designer dressed her and remarked: “Too much bottom. Too curvy.” Vairelli, who was one of Yves Saint Laurent’s favorite fit models and muses, described the outfit she was wearing at the last show she ever walked, for Moschino’s 30th anniversary: “It was…a long, large black jersey dress with two words on it: ‘Holy chic.’ ” Huidobro, whose unconventional looks made her a favorite of Yohji Yamamoto and Jean Paul Gaultier, described a dark, Gothic look she wore on the Comme des Garçons runway, then stomped around the room with an angry face.

After a standing ovation, Saillard was sitting backstage with a glass of Champagne, swarmed by kisses from friends. What surprised him most in working with the women, he explained, was how they were able to relive the dresses and moments without actually wearing the clothes. “It’s like something automatic,” Saillard said. “Amalia — she’s very Yves Saint Laurent. It was like [watching] a part of their memories, part of the history of fashion — just by moving their body. Moving was a kind of handwriting — it was different from Yves Saint Laurent to Azzedine Alaïa.

“It was a pleasure [to work with them],” Saillard continued. “And it’s not a job for us.… You know, all of the women have different jobs now. They had nothing to lose, nothing to gain [by participating.] It was all pleasure.”

Campbell’s security guard came to whisk her away at the end of the performance, but the model wasn’t ready to leave. She headed straight to the backstage area, where she introduced herself and congratulated the women. During the show, she Instagrammed a photo of the seven women with the caption “Amazing performance. Must see. Reminisce. Memories. Respect.”