The designer, a disciple of modernism if ever there was one, muses on the allure of the mid-century era and its pitch-perfect play with form and function. 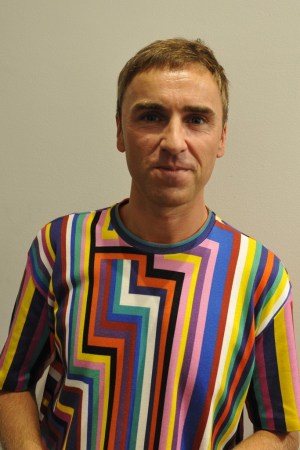 The Belgian Raf Simons reimagined ideas from the Fifties into hyper-chic fashions for today. Simons muses on the allure of the midcentury period and its pitch-perfect play with form and function.

WWD: Which period in history defined modernism the best, and why?
Simons: The industrialization and the Fifties’ economic boom largely affected the aesthetic of the times and pushed design to explore directions unknown until that moment. After the war, new needs were to be fulfilled, and there was extraordinary optimism for the future. The positivity was somehow the driving force for the pioneers of modernist design. During these years, designers created things that were completely new, and what I very much like about modernism is that it does not relate to history or the past.

Midcentury modern furniture remains extremely popular. Why?
Midcentury furniture is the epitome of modernity: the use of color, the combination of elements, the craftsmanship, yet the appeal of industrialization. Midcentury design shows no aesthetic engagement with the past, only the precise intention to define form and function, which makes this movement relevant for any period of time.

What about fashion? Was there a fashion era or designer that defined modernism best, or is that a moving target?
The language of Fifties couture was particularly interesting. There was a new approach to the use of shape, volume and color, and a redefinition of fashion by thinking forward. In architecture, there was a modernist movement. Le Corbusier, for example. In fashion, Balenciaga. In art, Picasso. It was not only the creative people but also the idea of optimism, of people thinking about the future—the fact they were attracted by being inspired by what is yet to come, and not knowing what it is going to be.

Fashion has a tendency to refer to past decades and epochs, but you always push modernity. How come?
The newness of fashion is what makes it interesting. Likewise, midcentury design showed there’s no actual need to tribute the past. It’s rather a matter of moving things ahead. I always think forward, to the next collection, to what is new.

Which object or cultural artifact best exemplifies modernism, and why?
Midcentury ceramics embody the essence of modernism—the oeuvres of Pol Chambost, Picasso Madoura, George Jouve, Jacques and Dani Ruelland from these times exemplify the dedication to form and color.

What makes a garment modern?
I think it’s a combination of elements. Modernity is a very delicate equation of form and function. Fabric, color and material are always deeply connected, so I believe it’s their combination that sets the modern tone of the garment.