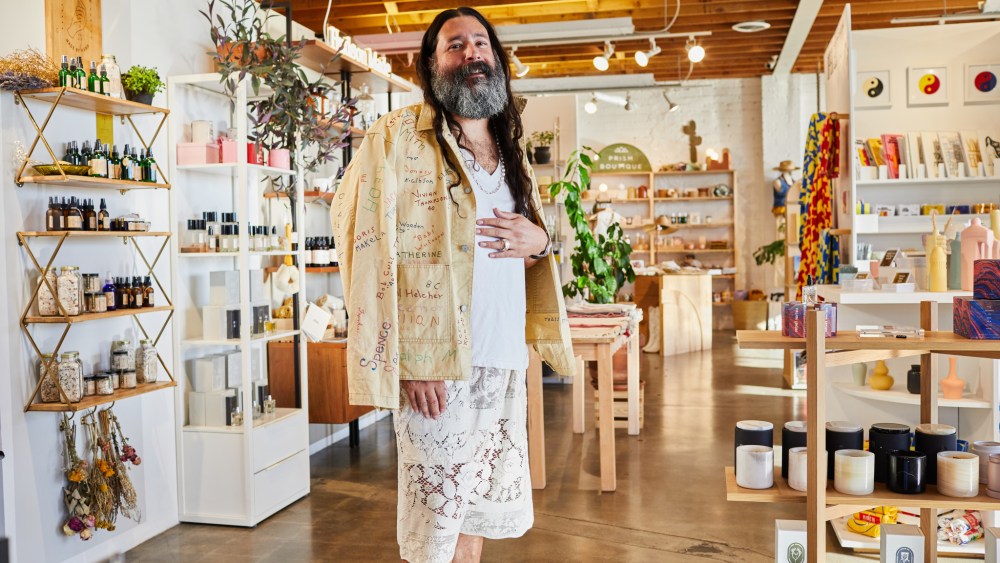 Since opening his first store in Palm Springs, California, on Jan. 1, 2021, Morelos has done more than $7 million in sales, and expanded to locations in Yucca Valley near Joshua Tree, the Ferry Building in San Francisco and soon Berkeley, California, and Hudson Valley, New York.

“We pride ourselves on creating experiential retail marketplaces in unconventional locations,” says Morelos, who grew up in Los Angeles, spent time running a design store in Brooklyn, New York, and moved to the desert in 2018. He first brought his pop-up markets to the Ace Hotel, then pivoted to his own brick-and-mortar stores when he saw opportunity — and people fleeing the cities — during COVID-19.

In December, he will debut his next concept, Market Market, a 40,000-square-foot, all-vintage marketplace in a former Stein Mart in Palm Springs, featuring furniture, housewares and clothing in curated spaces by RTH designer Rene Holguin, Maurizio Donadi’s Transnomadica, designer and collector Trina Turk and aloha shirt enthusiast Red Dot Hawaii, among others.

“I love what James is doing offering a new experience to brands and customers,” says Holguin, whose now-shuttered RTH in L.A. was once called “the coolest store in America” by GQ.

“We want to create a vintage paradise,” says Morelos, who is self-funded but open to taking on investors. “There is this whole growing movement of taking dead stock or vintage textiles and making new things out of them. So nothing in Market Market will be newly manufactured.”

They can listen to a live mariachi performance and pick up a bouquet from locally owned Hermano Flower Shop, whose slogan is “flowers for music and arts,” and buy wine and snacks from Palm Springs Bottle Shop, which stocks products from brands that are woman-, LGBTQ-, disability- and BIPOC [Black, Indigenous, people of color]- owned.

Based on a shop-in-shop model, each brand or purveyor pays a flat vendor service fee for space on a month-to-month basis, and Morelos and his team take care of the insurance, merchandising, staffing and selling, including credit card processing fees.

“Our point of view is, if you try to open your own 100- to 200-square-foot store, it’s not only going to cost you more, you will never have the foot traffic that we have. It’s about power in numbers, you know what I mean? And do you want to sit there or do you want to manage someone to sit there? We are a retail solution,” says Morelos. “People are figuring out we can be open seven days a week, and they don’t have to be. If you are a maker or a designer or a vintage picker, that’s what you want to be doing. Go travel America. Ship it back to us. We’ll merchandise it. It’s why we’ve been able to work with over 200 different makers and merchants.”

Beyond the overhead, all revenues go to the shop owners, some of them niche makers like Twentynine Palms, California-based hat designer Todd Fink, and some multibrand retail concepts themselves, like the San Francisco artist-designed goods emporium Open Editions.

The result is a staggering array of fun product, from cairn-shaped candles to embroidered “thank you” totes, Japanese-designed paper goods to style books.

“It’s not a homogenous, singular-point-of-view store, every 10 feet there is a whole other brand expression,” says Morelos. “I really believe that the overdesigned, overwrought, million-dollar interior — that’s over. No one needs that. What they want is brand discovery, shopping things that they’ve never seen before and a meaningful experience.”

“James was willing to take a chance with Opal Atlas before I’d sold my first product,” says Marlene Dunlevy, whose brand of artful souvenirs includes Joshua Tree patches and palm tree pins. “I started off with just one little souvenir booth, and by next month I’ll have three Opal Atlas shops, one in every Mojave Flea. My husband and I also started a vintage book and stationery store called Secret Canyon, and that concept has really grown alongside Mojave Flea Palm Springs and Yucca Valley.”

Earlier this year, Mojave Flea was engaged by Ron Herman for a three month pop-up, bringing in Ulla Johnson, Dries Van Noten and more higher-end labels. “Which is insane because when I was in junior high I was getting on the RTD bus to Melrose to go shop at Fred Segal,” says Morelos. “The ones who started this whole concept decades ago are now wanting to be a part of what I’ve created. It’s just such an amazing cycle of inspiration,” he says, acknowledging a debt to Segal’s shop-in-shop format.

Morelos grew up in L.A. and moved to Seattle in the ’90s to work in the music business, and eventually Rudy’s Barber Shop at the first Ace Hotel. “I fell in love with being surrounded by creatives, and it influenced the trajectory of my life,” he says of the experience.

He landed in New York City to work at Bumble and Bumble in 2001, opened his own salon in Williamsburg in Brooklyn in 2002, then made his first foray into retail, opening Scandinavian Grace in 2007. The design store grew to include two other locations, one in Brooklyn and one in Phoenicia in The Catskills.

When the recession hit, the Brooklyn stores crashed and burned, but the Phoenicia location was consistent.

“I figured out that destination-based retail can thrive through any circumstances, because when people are there, they’re weekending, they’re on vacation, they’re day-tripping…it is not based in reality,” he says.

After bringing his flea market concept west in 2018, he fell in love with Palm Springs — enough to move to the desert community in the heat of July.

When COVID-19 lockdowns began in March 2020, he was producing pop-up markets in L.A. at The Row downtown, and at Platform in Culver City, in addition to the Ace in Palm Springs. After everything shut down, he first tried to start selling online.

“But because of my experience with Scandinavian Grace during the recession, I pivoted to creating a brick-and-mortar marketplace. I knew it would work because it’s Palm Springs, and it’s a destination,” he says of the trend of focusing on smaller markets, which also made The Hamptons, Aspen and other suburban locales new retail destinations during the pandemic.

In October 2021, he added the 10,000-square-foot store in Yucca Valley near Joshua Tree, and earlier this year, the 5,000-square-foot Fog City Flea at the Ferry Building in San Francisco.

He still runs several roaming pop-up makers markets, including the Southern Flea touring Richmond, Virginia; Charlottesville, North Carolina, and Chattanooga, Tennessee, in November, and Evergreen Flea launching in Portland, Oregon, for the holidays. He sees them as proof-of-concept experiments for future brick-and-mortar locations.

“There’s so much richness in every corner of this country. For me as someone who curates stores or markets, it’s so inspiring to see textures and aesthetics and techniques from different regions. Things that make sense in SoCal don’t make sense in upstate New York,” Morelos says. “It keeps me wide-eyed.”