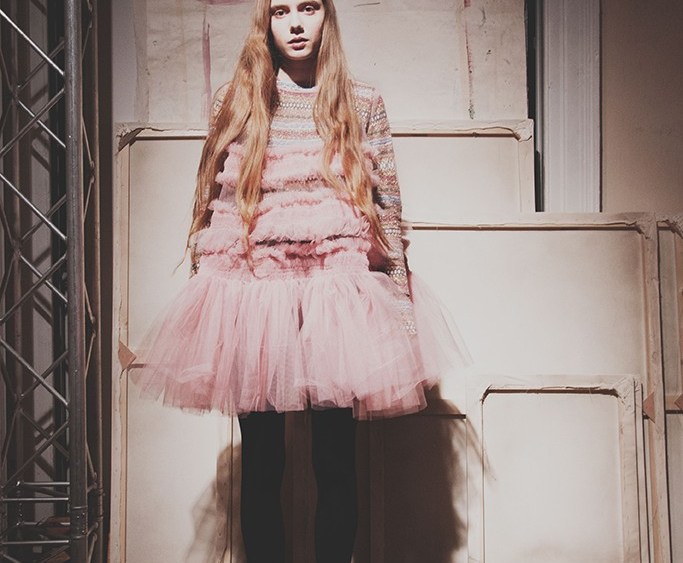 Life is galloping faster than Molly Goddard ever expected: Having shown her first collection off-schedule in London last September—with 20 girlfriends wearing her handmade, off-kilter party dresses in a church hall—Goddard is now supplying stores including Dover Street Market, whipping up a personal order from Björk and looking for more studio space.

She left her M.A. course at Central Saint Martins, where she’d studied under the late professor Louise Wilson, a year early to focus on putting together the spring 2015 collection. Her hope was that it would help her get a job. While she always wanted to have her own label, she assumed she’d work for someone else first.

“There was no budget, basically,” says Goddard in an interview at Rose Bakery, on the top floor of London’s Dover Street Market, of her September outing. “I never thought it was going to be a collection I would end up selling. To sell, I thought you had to have a show, or do a proper presentation—and this was a party, really.”

Her showstopping designs, exaggerated takes on children’s clothing and the stuff of little girls’ dress-up boxes, are now stocked in Dover Street Market in London and New York, I.T in Hong Kong and Comme des Garçons Trading Museum in Tokyo. In December, Goddard won sponsorship from NewGen, a longstanding British Fashion Council scheme sponsored by Topshop and aimed at building the high-end fashion brands of the future.

The 26-year-old, a striking figure with blue eyes and strawberry blonde hair chopped into short bangs at the front, was raised in West London. She holds a B.A. in knitwear from Central Saint Martins, and makes her collections by hand.

Inspired by the gingham and frilly outfits her mother and grandmother made for her as a child, Goddard gets her ideas poring over old family photographs and children’s knitwear patterns, and visiting Portobello Market, Alfies Antiques and the Retro Clothing Exchange in Notting Hill Gate.

“Maybe it’s a bit weird, but I still sometimes go into Baby Gap and look at the clothes—they are so good,” observes Goddard, who’s dressed in a denim patchwork DKNY skirt and a vintage, multicolored crocheted sweater. Even the burnished gold rings on her fingers are secondhand, from Portobello.

Her fall presentation, which took place on-schedule during London Fashion Week, was a life drawing class with an older, naked model named George. (Goddard admits her boyfriend was on standby with a pair of Speedos in case George didn’t show up.)

Such is her love of texture that she opted to study knitwear rather than textile design. She’s always loved the idea of creating textures and then wrapping them around the body. “I like gathering fabrics and seeing what shapes I can make. It’s kind of like fabric manipulation, I suppose,” she says. Her designs feature crocheting, pleating and smocking, which she does herself with a machine known as a Sally Stanley Smocking Pleater.

The handwork is one reason Dover Street was so attracted to her. “Molly’s designs are fresh and vibrant with an elegant innocence—and the fact that they are made by hand makes them all the more special,” says Dickon Bowden, vice president of Dover Street Market.

Children’s haphazard way of putting on clothes is also an ongoing source of fascination for Goddard.

“At that age, you don’t even care what you’re wearing—and that’s quite a nice thing,” she says. “You’re wearing a big dress, then you put on your mum’s shoes and then you put your favorite T-shirt on top. When my sister was born—she’s three years younger than me—I used to wear all her clothes. When I was three, or older, I was wearing these tiny little dresses with my entire bum slipping out the bottom. I was just obsessed.”

For a designer so enchanted with childhood, Goddard is being forced to grow up quickly. As orders increase, she’s toying with moving some of her production to factories, but doesn’t like that idea. “Finding factories that do justice to the techniques and how the clothes are made is going to be long and quite hard work. And having worked with factories with other designers before, I know how much goes wrong.”

“I want prices to be quite accessible at any age. I don’t want to sell dresses that cost 2,000 pounds. You have to do things that people can actually wear,” says Goddard, who’s still coming to grips with her aspirations. “I think I’d like to be very big, but keep the integrity. I mean, I’d love my own shop one day, but I’d also like to just stop and enjoy what’s happened so far.”