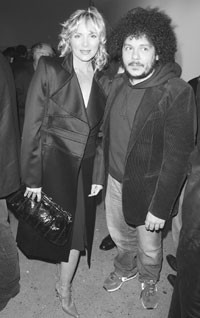 NEW YORK — If the Museum of Modern Art’s first serious exploration of fashion photography helps to validate the artistic merits of the medium, then perhaps some of fashion’s hip factor can rub off on the museum.

That certainly seemed the case at the exhibit’s opening on Wednesday, as everyone from front-row Kim Cattrall to Craig McDean turned out.

“I think it’s fantastical,” said Cattrall, who arrived in a Donna Karan dress and Yves Saint Laurent coat with Pascal Dangin, the photograph retoucher. “I’ve always loved looking though fashion photography, but I never imagined seeing it at this size.”

“Fashioning Fiction in Photography Since 1990” opened Friday at MoMA’s temporary Queens headquarters in Long Island City. In the exhibit, dramatic images from memorable fashion advertising campaigns and editorial shoots are shown in a different context than the pages of a magazine, one that offers the viewer a new perspective on a subject that has not often been championed by curators of contemporary photography.

Images from Cedric Buchet’s Prada campaign, where disconnected models are interspersed on a beach, or Steven Meisel’s series, called “The Good Life,” originally a fashion story in Vogue Italia that satirizes the ideal American family, take on a different perspective when the photographs are blown up and framed on a museum wall.

The exhibit aims to demonstrate how the Nineties marked a turning point in fashion photography,, moving away from direct displays of merchandise toward narrative story lines that frequently subverted the actual clothing. This is seen in Cindy Sherman’s self-portraits under the guise of “The New Cindy Sherman Collection,” made for Harper’s Bazaar in 1993.

“It’s a great start,” said Ellen von Unwerth, who added that fashion photography has generally not been treated with much respect by museums.

One reason for this, curators of the exhibit have noted, is the commercial nature of the medium, whether it is conceived for advertising or in collaboration with a magazine. Von Unwerth’s 1995 campaign for Alberta Ferretti, inspired by Hollywood film stills, is also included in the show. The show was organized by Susan Kismaric, curator, and Eva Respini, assistant curator, of the MoMA’s department of photography.

All the works in “Fashioning Fiction,” by 13 photographers, were originally created as commissions by magazines or as ad images. But there are signs that the perception that commercial work cannot be classified as art is beginning to change, as museum chairman Ronald Lauder appeared to be one of the most avidly interested attendees at the opening.

The museum will continue to explore the issue with a series of lectures and panel discussions, including one on Wednesday at 6:30 p.m. with photographers Philip-Lorca diCorcia and Collier Schorr; Dennis Freedman, creative director of WWD’s sister publication, W, and a consultant to the exhibit, and Ingrid Sischy, editor in chief of Interview. On Thursday, the Council of Fashion Designers of America, which is one of the show’s sponsors, will host a members’ preview of the show with Reed Krakoff, Kate Spade and Anna Sui.