Headbands, legwarmers and off-the-shoulder tops became fashion classics in the Eighties thanks to Jane Fonda, Olivia Newton-John and Jennifer Beals. 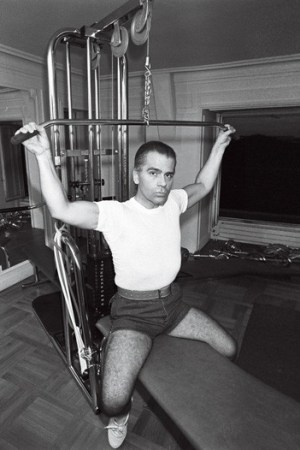 The Eighties were all about getting physical—in the hitting-the-gym kind of way. More and more people were investing in diets, health clubs, sports equipment and, thusly, exercise wear. Helping to lead this latest fitness—and fashion—craze was none other than actress Jane Fonda, who became the nation’s workout guru with the release of her first aerobics video in 1982. Two years later, she launched her own line of Workout apparel, which she plugged with a series of promotional appearances at Marshall Field’s in Chicago and Boston’s Jordan Marsh, among others, despite the presence of demonstrators protesting her controversial stance on the Vietnam War. “I was sensitive to what the selling staff was hearing about the line,” Marshall Field’s Ric Wanetik told WWD that March. “We saw that the customer was simply shopping, rather than buying the line to make any political statement.” Others making a stylish splash in that era: Richard Simmons, Olivia Newton-John and Jennifer Beals, propelling headbands, legwarmers and slouchy, off-the-shoulder tops to instant fashion classics.