With help from designers Thierry Mugler and Claude Montana, exaggerated shoulders and an itty-bitty waist defined the look of the Eighties power woman. 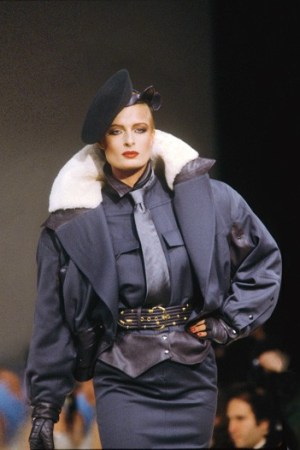 One of the eighties’ most compelling fashion contributions was the invention of the power woman, whose overt confidence and self-control, whether in the boardroom or bedroom, was expressed most pointedly through exaggerated shoulders and an itty-bitty waist. Behind her stood two provocateurs, Thierry Mugler and Claude Montana, both Frenchmen of roughly the same age, and rivals thus, who gravitated toward fantastical extremes. “From the very first,” wrote WWD in 1979, “Mugler promoted himself as a ‘futuristic troubadour’ and indeed his strident skintight suits with spiralled shoulders, clenched waists and gladiator cork accessories did look like something out of a science-fiction fantasy. ‘It was part Barbarella, part Ayn Rand,’ observed one critic of a Mugler show, and people started to say that Mugler made clothes for the Eighties.”

Montana’s look was just as out-there aggressive: “More often than not, the early concepts were indeed quite extreme, based on hard-edged, attention-getting interpretations of mannish, locker-room fantasies—sailors, Hell’s Angels, football players, even Wall Street bankers—all rendered with an explicit focus on the big, sharp shoulder that became Montana’s signature,” wrote WWD in 1984, at which point Montana was a commercial success regardless of his intentions. “When I started, I wanted to shock,” Montana told WWD. “It was an unconscious impulse, but that’s what it was all about.”