Though they offered very different takes on chic, Oscar de la Renta and Bill Blass became linked in the communal fashion psyche in the extravagant Eighties. 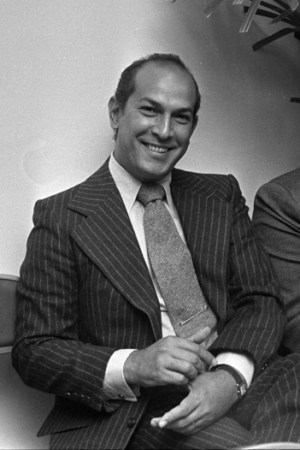 Bill and Oscar. Just as Ralph-Calvin-Donna developed into a verbal triptych despite design philosophies that had little in common, the names of Oscar de la Renta and Bill Blass became linked in the communal fashion psyche. Though they offered very different takes on chic—de la Renta’s had an undercurrent of Latin pizzazz, while Blass offered Midwestern practicality—each developed an elegant aesthetic that spoke with clarity to the ladies whose ascents paralleled their own, coming into full flower during New York’s flamboyantly social Eighties.

In the preceding decades, a particular genre of designer had developed. The social designer understood the Ladies Who Lunched, planned fund-raisers and attended balls for which only the most tastefully extravagant attire would do because they lived in the same world. Though that sphere also included Arnold Scaasi and, later, Carolina Herrera and de la Renta protégé Carolyne Roehm, Blass and de la Renta were its pillars. They went to events, supported causes and traveled with their client friends.

They also lived through tremendous cultural change and had to adapt along with the customer. In a conversation in 1993, de la Renta noted that, at first, “the woman I dressed was what I called a woman of leisure…today, there is this professional woman.” Blass piped in that even for the that old-school gal, “you don’t see the frivolity of dressing in the daytime…I applaud that.”

Regardless, by the turn of the century, Blass was ready to call it a career, a decision he expressed, not surprisingly, in a social context. “Fashion is like a party, and there is definitely a time to leave it,” he told WWD. Conversely, de la Renta hasn’t given retirement a thought. “In all the years I have been working, I have never had as good a time as I’m having now,” he told the paper in 2005. He attributed his recent resonance with younger women—including, among others, the high-profile likes of Sarah Jessica Parker, Jennifer Garner, Lea Michele and Jessica Biel—to the input of his daughter Eliza Bolen, who now works with him, and to staying open-minded. “The most exciting thing in life in general,” de la Renta said, “is that every single day I have something to learn.”