From his breakout collection for fall 1995 to his final, breathtaking Gucci outing in fall 2004, Tom Ford held the fashion world in thrall. 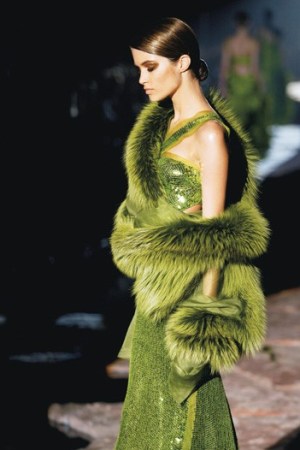 Under the slick creative direction of Tom Ford, Gucci rose from the ashes of family-induced mayhem (which included murder and a talking ghost) like a high-glam phoenix in heat. From his breakout collection for fall 1995, when the sight of Amber Valletta under a spotlight redefined just how steamy a woman can look in pants and a mohair coat, to his final, breathtaking Gucci outing, for fall 2004, Ford held the fashion world in thrall. Those two shows bracketed a dazzling decade during which he produced a body of work remarkable for being as commercial as it was editorial/Hollywood resonant and overtly sexual, sometimes shockingly so. Such was Ford’s particular brilliance. (In his role as Gucci Group’s business-savvy creative director, he identified the designers the group would sign on under chief executive officer Domenico De Sole.) The good times rolled until the arrival in 2001 of PPR’s François Pinault, who rode in as a white knight to ward off a takeover attempt by Bernard Arnault. All was cozy until Ford and De Sole deemed their autonomy under attack. On the eve of his fall 2003 show, Ford addressed the rumors for the first time, telling WWD that if the PPR executives were to insist on day-to-day involvement, “it will be very sad for me because I won’t be here for that.” They did. Ford’s rein at Gucci ended with a fabulous collection he designed as a punctuation mark, to “set the ending bar for me as a designer at Gucci. This is what 10 years have been about.”

“In the happy Hollywood version,” WWD wrote at the time, “Ford would be destined for a second stellar career.” Last year, Ford’s filmmaking debut, A Single Man, was a huge critical hit, and in his return to women’s fashion in September, he delivered one of the hits of the season, spectacular in its intimacy. Meanwhile, post-Ford Gucci flourishes as well, as Frida Giannini has lessened the sexual heat—but not the other kind. Under her creative direction, sales have skyrocketed.