Instead of covering what should have been the third day of New York Fashion Week, reporters immersed themselves in the terrorist attacks. 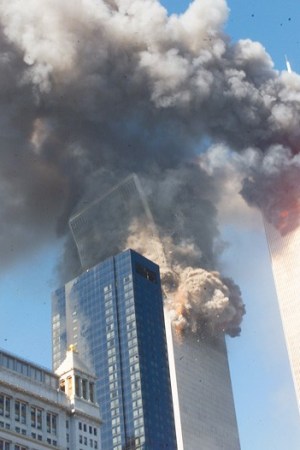 As smoke continued to billow from the World Trade Center towers on September 11, 2001, a skeleton crew of WWD staffers put out the newspaper from its West 34th Street newsroom. Instead of covering what should have been the third day of New York Fashion Week, reporters immersed themselves in the unimaginable tale of terrorism that had gripped the globe. Morning showgoers stood slack-jawed outside the Bryant Park tents, as Wall Street workers walked by, covered with dust brought on by the skyscrapers’ destruction. Soldiers stood with machine guns strapped across their chests outside the armory where shows were to have taken place that week. Phone lines were jammed, the Internet was down for most of the day, lights were out and some in the newsroom ducked under their desks in fear the Empire State Building across the street would be the next to topple. The crew stayed on until nearly midnight, determined to see the September 12 paper through.

The following day, and indeed in the weeks and months ahead, WWD reported how sirens wailed through the streets and pedestrians spilled into intersections as buildings were evacuated under the threat of further attacks. Bomb threats were reported at the Empire State Building, Grand Central Terminal and within Bryant Park. Garment Center workers described seeing the towers fall from their Midtown offices.

Financial markets were closed, and transportation came to a virtual halt, as Manhattan’s bridges, tunnels and subways remained shut for a good part of the next day and air traffic was grounded for four days. WWD kept its readers informed about the immediate implications for activities in New York, where hundreds of buyers were stranded, and Europe, where designers and executives questioned the immediate impact on the economy and the industry. Many canceled their upcoming shows.

Like millions of others throughout the world, the fashion community struggled to find anything definitive in the aftermath of the attacks.

Oscar de la Renta, who had planned to stage his spring collection in Bryant Park at noon on September 11, told WWD, “This is a national tragedy. In comparison, the fashion show is a minor thing.” Karl Lagerfeld added, “For me, it’s even beyond imagination. I’m physically sick. It shames the world. It’s horrible—beyond horrible. How this will all end, we don’t know.”