Demi Moore’s 1989 Oscar gown fiasco inspired starlets who came after her to bet on pretty-but-safe numbers. 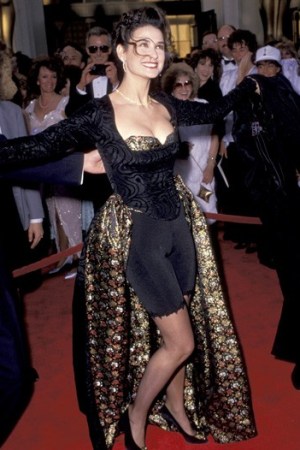 The March 31, 1989, front page of WWD pictured Demi Moore in a corset top, “Die Hard biking pants” and a “Rain Man cape.” “And look at that Dangerous décolletage,” read the snide copy under the headline “Oscar Fright.” Moore’s outfit was outrageous, designed specifically with shock value in mind—though as WWD noted, “Thank God, no designer is to blame.” She served herself up on a platter for fashion critics, and the taste would have to last. Because shortly thereafter the Oscars became the pretty-but-safe derby for dresses that fall into four all too familiar categories: princess (Gwyneth Paltrow, 1999; Penélope Cruz, 2009, 2007), Grecian goddesses (Anne Hathaway, 2008; Jennifer Lopez, 2007), straight and strapless (Renée Zellweger, 2001; Jennifer Aniston, every year), and black (Julia Roberts, 2001; Angelina Jolie, 2009). Now a fashion Groundhog Day where Best Dressed is code for Same Dress, Different Year, the Oscars make one appreciate Björk and her swan dress.