After an extravagant 45th anniversary celebration in 2007, Valentino offered his final famous runway wave at his fall 2008 couture show in Paris. 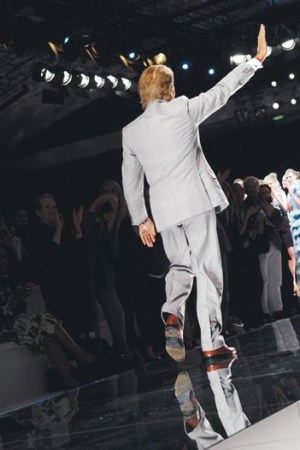 To celebrate the 45th anniversary of his house, Valentino showed his fall 2007 haute couture collection back where it all began, Rome. He staged a three-day extravaganza that included, in addition to the show itself, an informal fete on the roof of the Temple of Venus, the nearby Coliseum offering a breathtaking backdrop to sky-high acrobats in flowing Valentino robes; an elaborately curated retrospective at the Richard Meier-designed Ara Pacis Museum, the city’s first contemporary structure in nearly a century, and a lavish dinner on the grounds of the art-filled Villa Borghese. WWD estimated the cost at $10 million. At the time, there were rumors that the designer and his long-time partner, Giancarlo Giammetti, were negotiating three-year contracts with the house’s current owner, private equity fund Permira. Those contracts never materialized and, following his fall 2008 couture show in Paris, Valentino offered his final famous runway wave. Since retiring, he has continued voraciously in the limelight. He reveled in the attention that swirled around the 2008 documentary Valentino: The Last Emperor. Following the dismissal of his first successor, Alessandra Facchinetti, he heartily endorsed the appointment of his former accessories designers Maria Grazia Chiuri and Pier Paolo Piccioli to the creative helm of the house, to which he remains close—perhaps too close for the pair to take full creative ownership of the label. Following their couture show in July, Valentino opened his private archives with a star-studded dinner at his Wideville Chateau, and he sat front-row at the most recent ready-to-wear show, after which he noted the collection’s “homage to my work…with a new interpretation,” and proclaimed it “tutta bellissima.”