The costume designer is partnering with the vintage e-commerce platform for the 25th anniversary of "Clueless."

Mona May is partnering with Thrilling for a curation of vintage finds.

Costume designer Mona May has been thrifting through the pandemic.

The woman behind the fashion of pop culture staples “Romy and Michele” and “Clueless” has partnered with vintage e-tailer Thrilling on a 500-piece curation of secondhand finds. Ranging in price from $30 to $200, the collection will be available on Thrilling’s web site this week. It is meant to benefit more than 70 thrift store owners with inventory available to shop digitally via Thrilling.

In a Zoom call with WWD, Shilla Kim-Parker, Thrilling’s owner and founder, said the partnership with May came about after she “literally slid into Mona May’s [direct messages].”

“It’s the 25th anniversary of ‘Clueless.’ I think every woman on this earth remembers the moment they saw that yellow plaid outfit walk across the screen,” Kim-Parker said.

Thrilling is a two-year-old company with nine employees that has received seed funding from Prelude, Congruent, Closed Loop and Urban Us. Its online database now has 150 secondhand stores based in 30 cities. 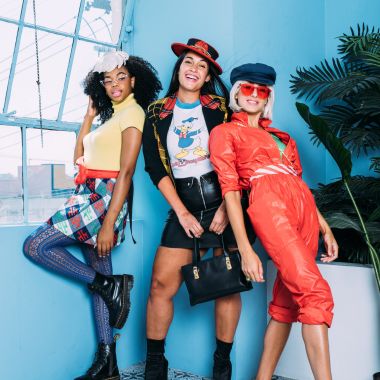 Mona May x Thrilling consists of 500 items priced from $30 to $200.  Courtesy of Thrilling

Since the beginning of 2020, Thrilling’s sales have increased 10 times, according to Kim-Parker.

“This has been particularly important given the impact of the pandemic,” she said. “The vast majority of our stores are able to generate new sales every month through Thrilling. The average Thrilling customer is 1,200 miles from the originating store.”

The collaboration with May involves both the curation of vintage items and a photo shoot conducted according to COVID-19 protocol. May told WWD she did not plan any of the outfits for the shoot.

“I had an idea and then it was Mona May just going nuts,” she said.

More than two decades ago, May sourced popular looks for “Clueless'” main characters from vintage stores.

“I brought the high and low together because nobody dressed like this when I did Cher and Dionne’s clothes,” May said. “They had few designers I could afford. I had to supplement with other pieces. There were a lot of thrifts in there.”

Kim-Parker and May began working on the collection two months ago, after toasting virtually with margaritas. The collection, May said, is her way of giving back to the fashion community.

“I’m a fierce female supporter,” May said. “I came to [the U.S.] with two suitcases. I built this myself, and this is how I give back because people helped me. We are in a crazy place. This is the only thing that can save it: connections and women, specifically.”