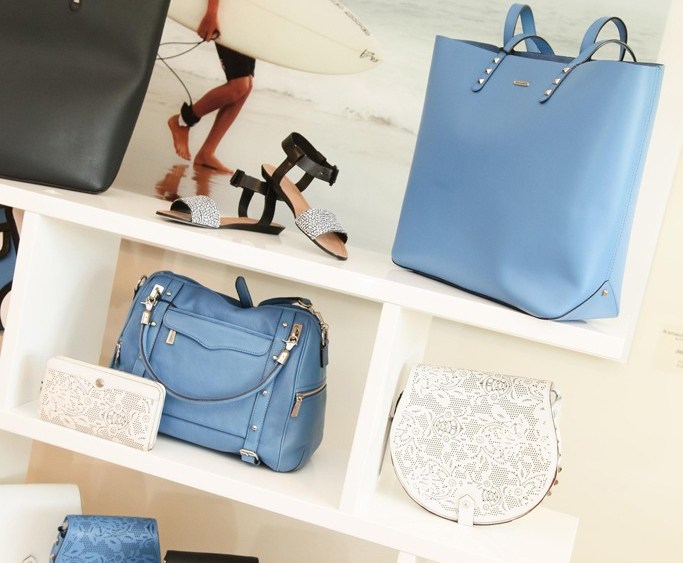 This summer’s recent heat wave has provided yet another excuse to hit the beach, but the fashion crowd has been settled in Montauk for weeks.

Photographer Ben Watts, Milk Studios founder Mazdack Rassi and hotelier Jeffrey Jah took over the Montauk Yacht Club Resort and Marina for their annual Shark Attack party. About 3,000 of their stylish friends turned out for the Fourth of July bash. The Surf Lodge’s artist in residence Max Snow got a jump on the summer party circuit by hosting an Opening Weekend event with Willie Nelson and Courtney Love. Snow is also getting in on the area’s laid-back style with a limited-edition signature collection for the Surf Lodge.

He has plenty of company with Rebecca Minkoff and Love Adorned, Summer Session opening pop-up shops, Cynthia Rowley making the most of her Montauk store and Rachel Comey and others hosting trunk shows.

Michelle Smith staged a fashion show for her Milly label July 20 during Sound Waves @The House in Montauk. This kickoff event featured Natalia Kills, DJ Hesta Prynn and other musical performances. It was the first of a five-week series that will showcase internationally recognized artists and emerging talent. One of the curators of Sound Waves, Ian Gerard of Syndicate 5, who is also chief executive officer of Gen Art, recruited Smith. The two have been friendly since he produced Milly’s first fashion week show in 2002. Smith has a pop-up store on Main Street in East Hampton.

A Montauk regular for 15 years, Bethany Mayer, who owns the Surf Bazaar at the Surf Lodge, said, “The biggest noticeable change has been how very fashionable it has become. It’s not a sleepy little fishing village anymore.”

But Mayer noted style setters started coming to Montauk decades ago such as Andy Warhol, The Rolling Stones and Peter Beard. To keep up with this summer’s increasingly fashion-minded crowd, she’s selling labels like Mikoh, Cheyann Benedict and Samudra and hosting trunk shows. She also designs the Surf Bazaar collection. With two houses in Montauk, Mayer and her husband bounce between the beach and their New York City apartment. “I have city time and Montauk time all year round. I encourage this type of lifestyle. It’s inspiring,” she said. “We think it’s a new way of life. It doesn’t have to be one city or the other anymore.”

Earlier this month Rachel Comey was at the Surf Lodge for a two-day trunk show. The meet-and-greet at the Swim Shop at the Surf Bazaar showed off her customized T-shirts, swimwear and beach cabanas. The $48 shirts are being sold all summer, and the white nautical-inspired ringer one trimmed in the Surf Lodge’s colors of green and yellow can be seen on Surf Lodge staffers.

With a pop-up store at Sole East Resort open through Labor Day, Rebecca Minkoff and her brother Uri, the company’s ceo, are making the rounds in the Hamptons this summer. “We like the vibe, the sense of discovery and people who are in Montauk. It is known for being a surfing hot spot, and this reminds us of growing up in Southern California, trying to find the best and coolest spots that you felt like you discovered and only a few knew about. Montauk reminds us of this,” he said. “It’s important for us to maintain this contact with our customer, as the Montauk girl is often a leader and discoverer.”

With retail prices ranging from $150 to $795, the designer tried to gear the selection for quick, pick-up pieces that will appeal to weekenders. The Fiona sandal and the Camera crossbody bag are two favorites with shoppers.

Cynthia Rowley is not a newcomer to the summer scene, having surfed at Ditch Planes for years. Fans of her swimwear, rash guards and sportswear can find them in her understated Montauk Highway shop. To try to reel in more shoppers — of all ages — the designer has dedicated a section of the store to sell CuRious candy, a staple at her East 78th Street store that opened this spring. All that licorice has helped to attract more customers to the shop, which has had a busy season so far, according to a company spokeswoman.

Rowley’s Hamptons shoppers have the exclusive on Montauk-centric T-shirts with such sayings as “Here today, gone to Montauk,” “Party Wave” (which has an image of 30 surfers on a wave), “Meet Me in Montauk” and the newest addition, “Montick,” which is imprinted with an image of the Lyme disease-causing insect.

The success of an Amagansett outpost that first opened last summer prompted Love Adorned Summer Session to open a pop-up further east at Ruschmeyer’s. Store manager Vincent Martinelli will host a few special events in the Montauk location before September arrives, including a pottery and textiles sale this weekend and a vintage jewelry sale Aug. 17 to 18. All sorts of jewelry, Faliero Sarti scarves and wraps, Kapital sweatshirts, Engineered Garment hats, Okura bandanas, Pendleton towels and all the other items are displayed in cabinets that resemble antique train cases. By the time the nighttime crowd arrives, all the items are neatly locked away in the cases until the morning crew returns to set up shop.

So far this summer, hotel guests and weekenders like the looks of vintage indigo West African wraps, plush fresco towels, antique jewelry, and African and Colombian hats that help shield the afternoon sun.

Levi’s also has a presence at Ruschmeyer’s, having decked out employees. Levi’s marketing manager Ben Starmer said, “We love Ruschmeyer’s. Like Levi’s Made and Crafted, Ruschmeyer’s makes sure to take time for the good things —and that’s important in both hospitality and clothing. Although their design and amenities are simple, you can tell that they have obsessed over every little detail. It’s great to partner with good people who know how to create this new sort of luxury — a simple and smart refinement that doesn’t try too hard.”

Earlier this month, the shopping site Refinery 29 partnered with Sunglass Hut, Olay Fresh Effects and Malibu Island Spiced rum to launch the Refinery29 Beach House in Montauk. Every weekend this month, a different batch of style influencers will be invited to crash there and enjoy the hammock, tiki bar, volleyball games, beach balls and surfboards. Stylist Natalie Joos, Nifty Thrifty’s Topper Luciani and Friends’ band members were the first weekenders to stay in the house. Publicist Sydney Reising and bloggers Helena Glazer, Christine Cameron and Alicia Lund were among the other guests to file through this summer. In turn, Refinery 29 is posting on its site slide shows and videos of the beach house’s carousing guests.