Montblanc wants its iconic writing instruments to become more exclusive, as a means of accelerating its long-term evolution into a broader luxury goods brand. 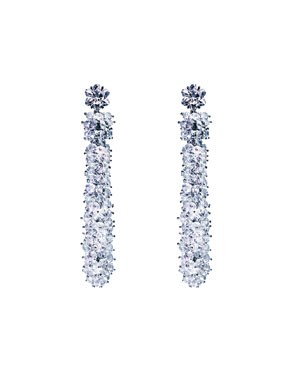 Montblanc wants its iconic writing instruments to become more exclusive, as a means of accelerating its long-term evolution into a broader luxury goods brand.

The Hamburg, Germany-based firm, owned by Compagnie Financière Richemont, is toning down its mall-store presence and midlevel-priced pen offerings, closing some of its 44 stores in the U.S. and building new ones that will showcase its latest timepieces, pens and accessories in a lavish, boutiquelike setting. Montblanc’s goal is to keep or build a total of 21 stores in key U.S. luxury markets.

A 3,000-square-foot Montblanc outpost bowed last month in Las Vegas, and locations slated for a spring opening include New York’s Westchester County, Chicago and King of Prussia, Pa. All new stores will also showcase the firm’s $200-to-$2,000 silver jewelry line and the one-year-old fine jewelry collection, where prices range from $700 for a yellow gold ring to $5 million for the Lumiere Pendant, a necklace featuring 378 carats of diamonds with a 12-carat stone at the center.

The precious jewelry houses the Montblanc Diamond cut — a patented shape identical to the firm’s signature white snowflake carved in its pens. The pieces have been worn by Lucy Liu and Andie MacDowell at such events as the Grammy Awards and the Cannes Film Festival.

As for the brand’s classic pens, the firm is slowly raising their $300 price tag to $500 to $1,000, and using more expensive materials, including gold and platinum. The goal is for every pen to eventually become a collector’s item.

Jan-Patrick Schmitz, president and chief executive officer of Montblanc North America, said the expanded product range, which includes fragrances and men’s and women’s handbags and small leather goods, will help the firm transition in the next five to eight years from a writing instrument leader to a luxury lifestyle firm. In that same time, he expects nonwriting accessories to grow to 60 to 70 percent of the brand’s business from 50 percent currently.

Schmitz feels launching fine jewelry is an obvious step, as Montblanc also produces collectors’ pens made of rubies, diamonds and other precious stones that can retail for up to $755,000.

“If you look at our brand as a whole, we have a 101-year history,” Schmitz said. “And we have a long history in dealing with jewels in terms of precious stones and in terms of watches and writing tools. So this is nothing new to us in crafting precious product. But now, it is ladies jewelry, as opposed to precious jewelry that writes.”

With its red carpet presence and actress Eva Green in the role of brand ambassador, the firm is sending a message that it is ready to contend with the likes of Chopard, Van Cleef & Arpels and Cartier. While the firm’s public relations effort is vast and worldwide — Montblanc participates in UNICEF events and funds charity productions on Broadway — industry insiders question its relevance in fine jewelry.

“The question is, do we really need another fine jewelry brand,” said Suzanne Hader, principal at 400twin Luxury Brand Consulting. “Everybody is doing the same thing in terms of trying to expand into luxury categories with high margins.”

In recent years, jewelry brands such as Cartier and Bulgari have made the move into handbags, while ready-to-wear stalwarts Chanel and Christian Dior have launched fine and fashion jewelry collections.

Hader said the Montblanc jewelry should fare well in parts of the world such as Asia and the Middle East, where the brand may not be so highly associated with pens.

“I do think that the way Montblanc is going about expanding is smart,” Hader said. “They’re emphasizing the Middle East and parts of Asia, and for people who don’t recognize the company for their writing instruments, the products they have are beautiful. The jewelry has a strong point of view, it’s tied into design trends from the pens and is developing strong brand personality. It’s a very sophisticated way to do things. It’s not something I’ve seen brands put a lot of thought into. They often jump into the deep end.”

In November, the company opened an 11,000-square-foot flagship in Shanghai, its biggest store worldwide. Montblanc will continue to maintain a wholesale presence, but will scale it down to select department stores and some independent jewelry stores. Schmidt said the brand was distributed in 3,500 to 4,000 wholesale doors a few years ago, but that has narrowed to about 1,000.

“In the future, it’s going to be less and less, only in the most prestigious retailers like Saks Fifth Avenue and Neiman Marcus,” he said. “We used to be conveniently located in almost every significant mall in North America. Now, we are located at the pinnacle of every market’s key environments.”

The company also plans a big push with its handbags that launched in November, a collection Schmitz claims isn’t meant to compete with high-end fashion brands, but to be more functional accessories.