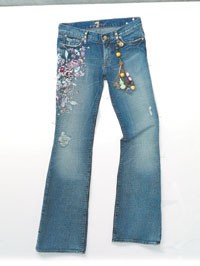 NEW YORK — Note to designers fresh from fashion school — don’t get accustomed to a life without extracurricular activities just yet.

More so than ever, young designers are required to look beyond their own collections and put in overtime elsewhere to make a living in fashion, from creating private label collections for retail chains to consulting on Web sites or making restaurant uniforms.

The concept isn’t altogether new. Marc Jacobs has been designing for Louis Vuitton since 1997, and Michael Kors had a six-and-a-half-year gig at Celine, which ended last year. In Europe, Stella McCartney designs activewear for Adidas, Alexander McQueen makes footwear for Puma, and Christian Lacroix puts his spin on anything from trains to hotels and airplane uniforms.

But with New York’s young designers, moonlighting now seems as ubiquitous as needles and thread.

Zac Posen leads the pack with several cobranded deals, from limited-edition jeans with Seven For All Mankind to tights for Wolford and driving gloves for Jaguar. Derek Lam is unveiling his first apparel collection for Tod’s in Paris this week, while Proenza Schouler’s Jack McCollough and Lazaro Hernandez are said to be working on a watch for Movado. As Four designed apparel for Kate Spade; Richard Chai is consulting creative director for Onward Kashiyama’s new Nave collection; Tara Subkoff designs shoes for Easy Spirit, and Christopher Deane’s duo Christopher Crawford and Angela Deane are the designers behind Freda, the in-house label for London boutique chain Matches.

An industry executive said a young American designer can earn a base rate of up to $500,000, and, depending on the nature of the deal, additionally cash in on royalties, from a percentage of overall sales to financial compensations for personal appearances and editorial and advertising usage rights. Then the corporations also often help designers with staging the fashion show. That’s quite a lot of ka-ching, particularly for young, cash-strapped designers who survive from collection to collection and whose annual sales can be less than $1 million.

Designers looking to make the leap from a small name to a Seventh Avenue player arguably face more challenges than their established peers did decades ago. Department stores are struggling and often only try a new name if it’s on consignment; manufacturing costs are rising, particularly for those sourcing in Europe, and putting on a runway show is nearly impossible without the help of a corporate sponsor. It has virtually become impossible for a small designer to be self-financed, and rather than give up their independence and sell their names, many are now opting to take on secondary projects.

“It’s important to me because I would like to stay as independent as long as possible,” said Lam, who was contracted by Tod’s for at least two seasons. “If you’re new and someone comes and offers you a lot of money, it’s tempting to give up part of your business. But having these side projects allows me to have an income into the company, so that we can stay afloat and independent and not have to sell out.

“Tod’s brings that expertise of leather goods, branding and direct retailing to the table,” Lam continued. “Hopefully, the association also gives us greater authority in every aspect … from editorial to walking into a fabric mill.”

These partnership deals can help designers gather experience in an unrelated field and get their names across to a wider audience. And they can often pave the way for licensing agreements down the road.

“I think this is one of the best things that can happen to a young designer who is struggling to survive or starting in business,” said David Wolfe, creative director at The Doneger Group, the buying office and fashion consulting firm here. “One of the problems we have today is that young designers are often thrust into a position of responsibility without enough varied experience under their belt. I think the more opportunity they have to explore the various facets of the industry, the better off they are going to be.”

Stan Herman, president of the Council of Fashion Designers of America, said, “I can’t remember a time when so many designers started their business at so early a stage in their career. Now, they bypass the apprenticeship to go into business very early. In a sense, taking on these projects is the new apprenticeship.…The best thing a designer can do is to take these kinds of jobs and use them as a grounding for their business.”

And Herman knows what he’s talking about. Among his various extracurricular design projects over the years was designing uniforms for clients such as Federal Express and Amtrak.

“I think that cobranding is a really crucial area to the development of an emerging brand in fashion,” said Marc Beckman, president of Designer Management Agency, a consulting firm here specializing in connecting fashion businesses with other business segments, from electronics to automobiles. “Down the road, it gives a certain amount of authenticity when the designer produces that product on their own. It sets it up for future deals.”

Susan Posen, chief executive officer, vice chairman and mother of Zac Posen, concurred. “They can be a precursor to licensing arrangements,” she said. “You are testing the waters and seeing what makes a good partner. You are learning. It’s a sort of selective brand outreach, where the brands can enhance one another.”

Susan Posen pointed to a recent collaboration Zac Posen had with Invista. The designer traveled to the fiber company’s headquarters in Wilmington, N.C., where he learned about new fabric technologies. As a result, the designer now coats many of his white fabrics with Invista’s Teflon. “In many ways, we get exposed to products we haven’t been involved with before, and it’s tremendous learning, both technical and creative,” Susan Posen said.

In Alice Roi’s case, that will include learning how to drive. Beckman at DMA arranged a deal between Roi, who is also his wife, and General Motors, which was looking for a fashion tie-in for its Saturn Sky car launch. As part of a deal, GM helped Roi with her fashion show and a VIP postshow dinner, and promised to teach the designer to drive. In return, Roi submitted a print from her spring collection, which was painted on a Sky Roadster car driven around Manhattan during fashion week. The relationship hasn’t ended with fashion week: Roi is working with the company’s color department to develop custom colors for the cars. In addition, she is traveling to GM’s headquarters in Michigan to meet with the design department, which could even lead to her designing her own car one day.

Roi is also a consultant on Match.com, where she is a “Dear Abby” type who advises readers on dress codes for dates and things to avoid on dates.

“You are mixing two things you may not think will be a good marriage, but when you put the elements together, the result is unbelievable, like a car with a pink floral print,” said Roi of collaborations. “It makes me look at fashion more from a popular culture point of view.”

Extending one’s repertoire can also change the public perception of a designer. “People look at you in different eyes,” said Alvin Valley, who has recently partnered with W Hotels, creating exclusive pieces for its boutiques and the uniforms for Icon, one of the hotel’s restaurants. W Hotels also recently tapped Diane von Furstenberg to design emergency beauty and fashion kits. “You are no longer just a designer who has creative ideas just within the fashion world,” added Valley, who has also held talks with Cole Haan for a potential collaboration next fall.

Valley is one of several designers to have a go at creating uniforms for restaurants or airlines. Christian Lacroix recently redesigned the uniforms for Air France, while Kate Spade was responsible for the uniforms at Song. Kevin Carrigan, creative director for ck Calvin Klein and the better-priced Calvin Klein sportswear, created the outfits for Jean-Georges Vongerichten’s Perry St., Vivienne Tam designed those for 66, and Yohji Yamamoto worked his pencil for Nobu 57.

Many consultants said there can be one snag, however. A designer who is willing to take on extra projects must be able to balance them with their main collection and not spread themselves and their talent too thin, which could become a problem in the long run.

“I would advise designers to do as much as they humanly can and work as hard as they can,” said Fern Mallis, executive director of 7th on Sixth and vice president of IMG. “People are passionate about what they do, and they need to do enough and then some, but not so much that they overextend themselves. Everybody has to find their balance and their breaking point of what they can accomplish.”

CFDA’s Herman agreed. “These deals will help them as long as they don’t suck the energy out of their own business. That can’t happen. If it does that, don’t do it.”