Moore From L.A.: Can Dockers Shed Its Dad Pants Image?

Owner Levi Strauss, which had one of the most successful IPOs of the year, is putting renewed focus on the label, hoping to strike gold again, this time with khaki, and a little help from some stylish L.A. friends.

Dockers, the brand that invented casual Fridays, dressed Homer Simpson and inspired a 1991 episode of “Seinfeld” that had Jerry handwringing about dating a woman who liked a TV commercial for the chinos, is making a fashion play.

Owner Levi Strauss & Co., which had one of the most successful initial public offerings of the year, is putting renewed focus on the brand, hoping to strike gold again, this time with khaki — and a little help from some stylish Los Angeles friends.

Dockers tapped its go-to Hollywood collaborator Karla Welch, stylist to Justin Bieber and Tracee Ellis Ross, to design a capsule collection of five unisex styles sold at Dover Street Market, including $360 tapered pleated pants inspired by Fred Astaire. And it linked with cult L.A. upcycling brand Atelier & Repairs on three styles that debuted at the men’s wear trade show Pitti Uomo, including the “Kennedy” with chambray details and the “Traveler” with individual carpenter pockets for an iPhone and earbuds.

But can Dockers, forever the (saggy) butt of jokes, escape its goofy dad pants rep?

“For the last two decades, the business has been up and down and somewhat challenging,” admitted Levi Strauss & Co. chief marketing officer Jennifer Sey of Dockers’ journey, which started in 1986.

“We’re looking to take a page out of the Levi’s playbook…and take some of the learning that helped us put Levi’s back at the center of culture and performing from a financial perspective in a consistent way,” she explained, touting Dockers’ 80 percent brand awareness among consumers over age 35 as “nothing to laugh at.” 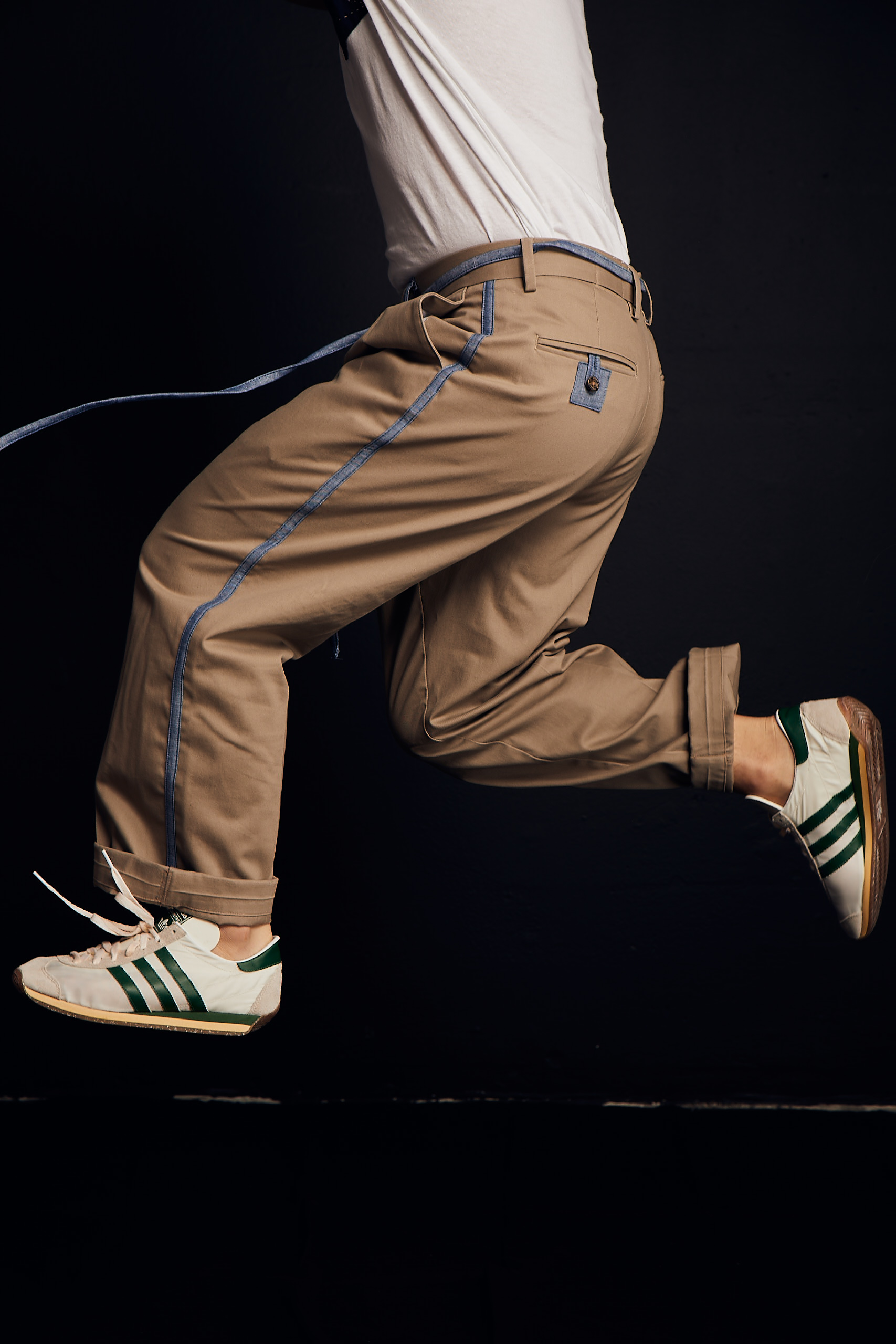 The business was built on 100 percent cotton khaki pants, which surged in popularity in the early Nineties when Dockers sent “A Guide to Casual Businesswear” to 25,000 human resource managers outlining how a more relaxed dress code could boost productivity. In five years, Dockers rocketed to $1 billion in sales. “Baby Boomers had worn suits all their lives and they loved Levi’s and wanted to bring more of themselves and a sense of individuality to the workplace. Dockers let them do that, at least on Fridays,” Sey said.

While early styles were loose-fitting and pleated, the vision evolved to include flat-front silhouettes, stretch and moisture-wicking mesh fabrics, Never Iron and Stain Defender innovations appealing to gear heads and tech whizzes, as well as a full range of product, including shirts and accessories. But Sey acknowledged, “We had a moment when we failed to innovate.” Premium denim took over, and Dockers became a synonym for schlump, nearly sold by Levi’s in 2004 to pay off debt. Soon after, it became a brand with an identity crisis. A controversial 2009 “Man-ifesto” ad campaign was criticized for sexist overtones. “It’s time to answer the call of manhood,” it read. “It’s time for men to wear the pants.”

Now Sey is hoping to rewrite the script. 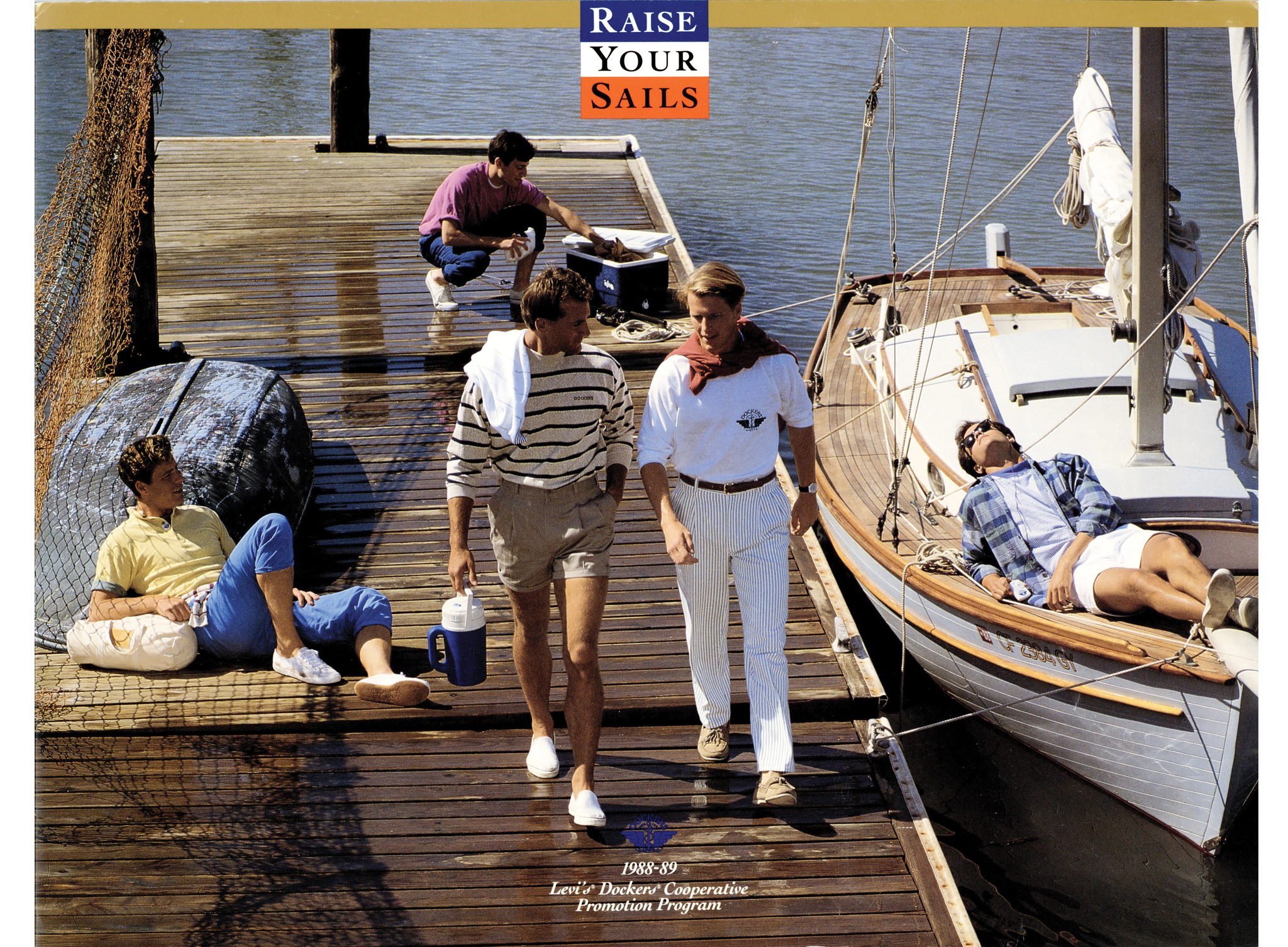 “We’re coming from a position of strength. But it will take a moment to change people’s minds. It’s very different from when the Dockers brand launched in 1986. Now, at least on the coasts, people are wearing jeans to work every day. We want him to think about khaki and Dockers when he needs to be ready to take on the day, has an important meeting, a date, is meeting the parents,” Sey said.

Maybe what Dockers needs to invent is “dress-up Fridays.”

It’s looking to fashion to help. The brand began ramping up its image around its 30th anniversary in 2016, when Dockers had a presence at New York Fashion Week: Men’s. Last year, the company jumped on the heritage bandwagon, reviving the wings and anchor logo created to speak to the brand’s West Coast roots and maritime aesthetic. (The khaki pants were originally inspired by British longshoremen.) More recently, Dockers dropped into Berlin Fashion Week, hosting an event as part of its “Always On” speaker series discussing innovation and entrepreneurship.

But you only have to look at Dockers’ social channels to know that the dollars being spent are a fraction of what’s going to Levi’s, which has a presence at nearly every major music festival around the world, and celebrity collaborators galore, including most recently Hailey Baldwin.

“On the Levi’s side, we have seen tremendous brand energy happen through collaborations, which is not to say we’d have the same collaborators for Dockers,” said Sey, emphasizing entrepreneurs as the celebrities in Dockers’ work-centric world.

That doesn’t mean the brand can’t benefit from some Hollywood sheen. The idea for the Dockers x Karla collection came about when the stylist collaborated with Levi’s on a capsule collection last year, a partnership that resulted in a star-studded Levi’s 501 Day mini-music festival. “She said her dream was to do a Dockers collaboration, and I said, ‘I can make that happen,'” remembered Sey. “She loves khaki, her dad sold Dockers in his clothing store. In her mind, khakis are this basic in a man’s wardrobe that allows for real individual style. She had this vision for baggy pleated pants and a trenchcoat that we got super excited about because she brings such energy and style and individuality to everything she does. That was a critical pivot point. She gets us to look at our own line differently.” 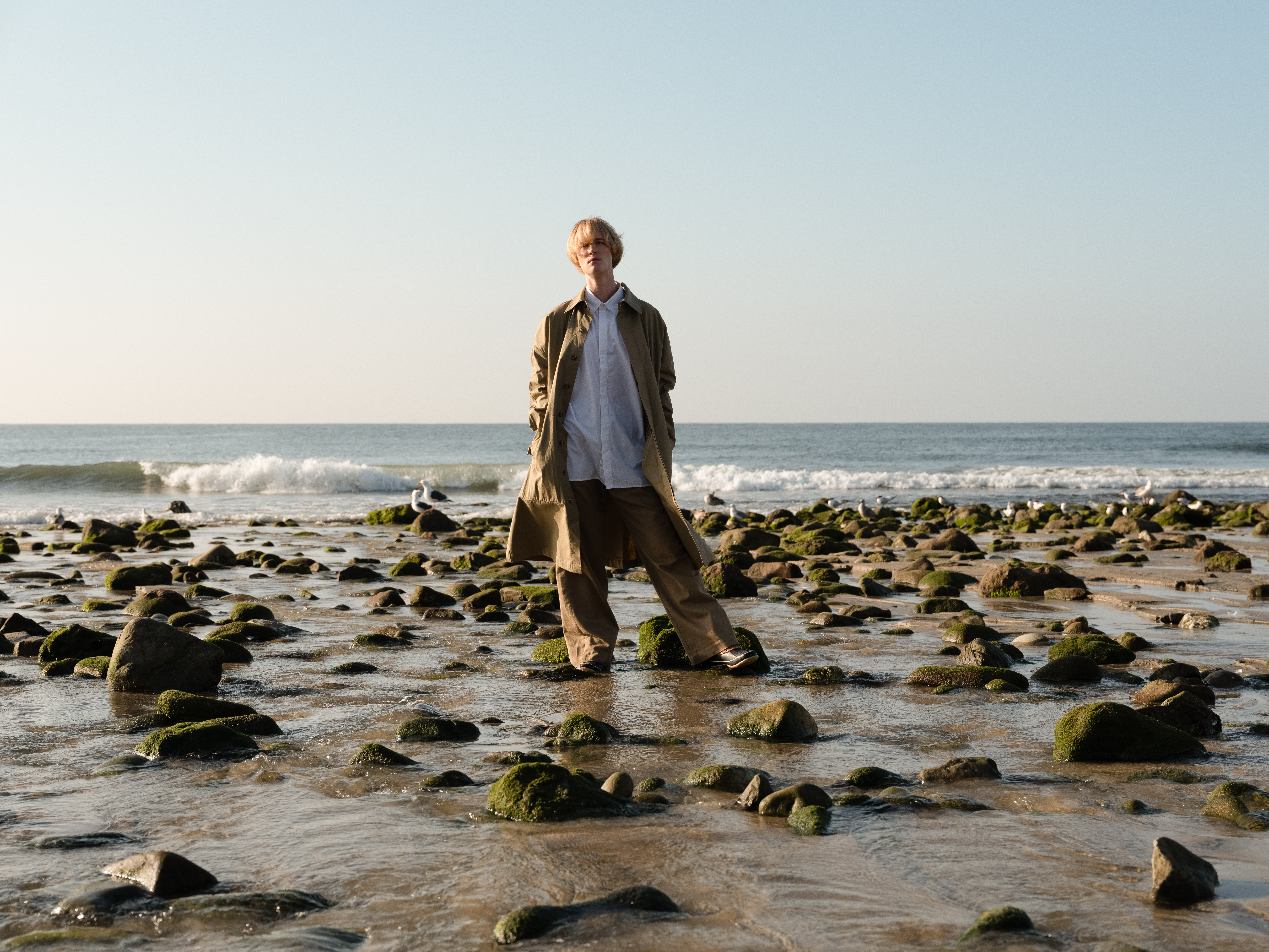 What Dockers has going for it now that it didn’t have in the early Aughts is that fashion is on its side. There’s a wave of Nineties nostalgia in the marketplace. And strong denim sales aside, men (and women, though they are not Dockers’ target customers, at least not yet, but perhaps could be with a unisex play) seem to be ready to wear pants again. Runway designers are touting cool-looking, baggy pants for men and women, which have turned up in recent collections by everyone from Louis Vuitton men’s to Givenchy haute couture.

The cultural landscape could be primed for Dockers, too. Casual Friday has evolved into casual every day with the rise of ath-leisure. But as the evolution of work continues to be a hot topic (whether it’s the rise of the gig economy or increasing automation making competition for jobs more intense) there would seem to be opportunity in dressing up in a polished khaki uniform. “It is a moment for khaki because it’s gentle, it’s a color that goes with everything,” said Atelier & Repairs cofounder Maurizio Donadi.

Dockers is still a relatively small piece of the Levi’s bottom line — in 2018, it represented just 7 percent of total volume. Annual revenue was $476 million in 2012, the last figure available. Levi Strauss & Co. no longer breaks out sales for its individual brands, but the group’s first-half revenue was up 10 percent, “with every brand growing,” Sey said. And Dockers remains a core part of the business the team is dedicated to strengthening.

Dockers’ challenges are the same as the ones Levi’s is facing — the brand sells mostly through wholesale channels, and more of those are disappearing every day. That’s why Dockers needs to break into upscale stores — like Dover Street Market — and more youth-oriented clothing chains, to bring in new customers. Pop-ups could be an interesting route, too.

“Our priorities are product, news and innovation,” Sey said of her work for the remainder of 2019. “We’re going to launch the third chapter of our ‘Always On’ series, a new piece of film, new digital content, and there is more to come from a collaboration perspective.”

She highlighted Europe for leading the charge with new channels of retail distribution, singling out upscale concession stores that Dockers operates selling head-to-toe product at 34 branches of luxury department store El Cortes Ingles in Spain as an example of the potential. “Where you are seen and where you show up is the number-one equity driver. We have to focus on getting the brand in places that make him feel like it’s cool.” 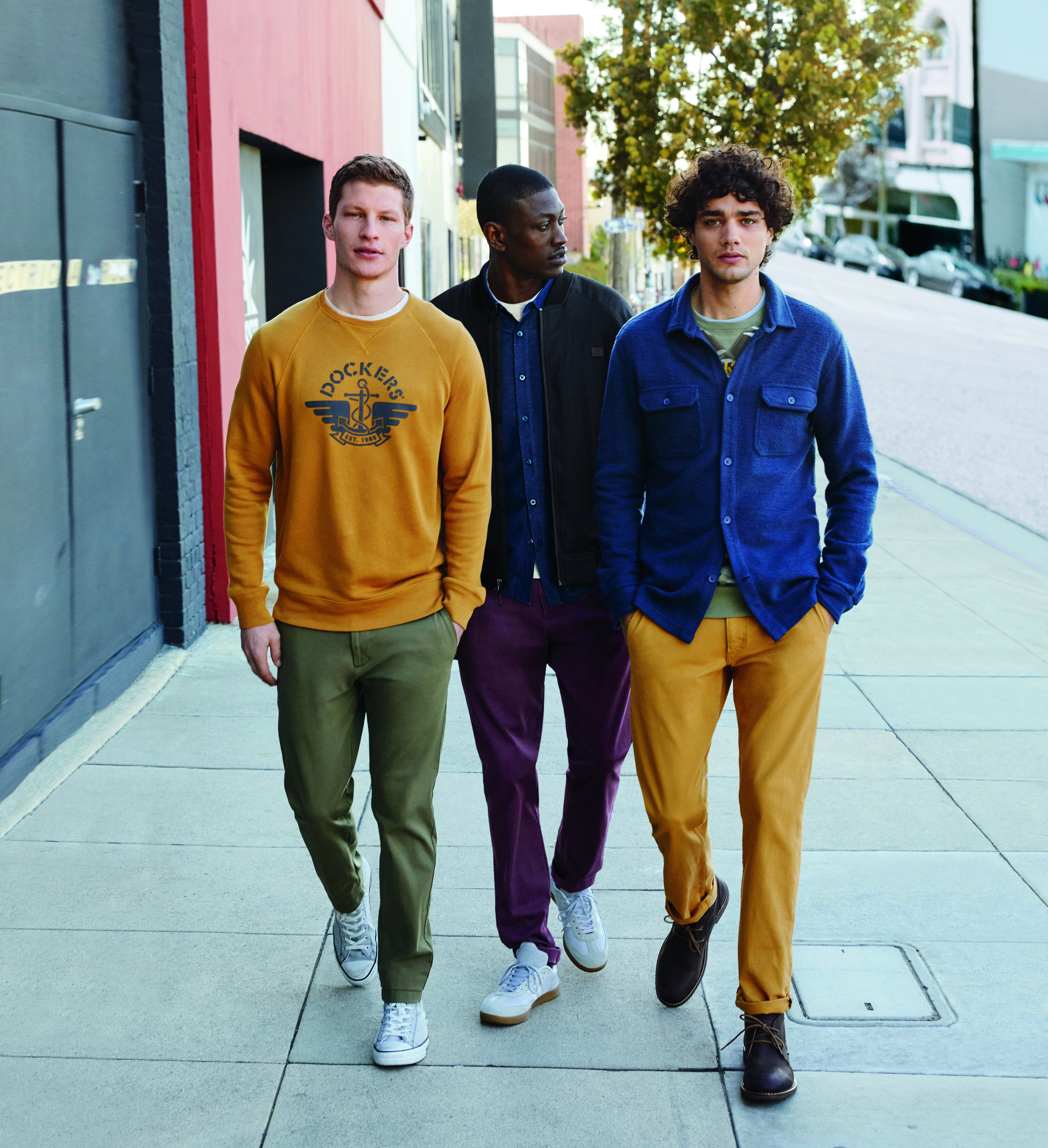