Moore From L.A.: Coronavirus Effect on Designers — ‘We’re All Drowning’

"Things I said 'no' to a week ago, now I say, let’s try it, let’s go out in a blaze of glory," said Bobby Kim, cofounder of streetwear brand The Hundreds.

The beaches are closed, the freeways near empty and the factories in the largest U.S. apparel manufacturing center have ground to a halt. While the coronavirus has put the brakes on life and commerce as we knew it, Los Angeles designers and brands are scrambling to triage their businesses.

“So much of branding is about longevity. We are building something to last like Levi’s or a luxury house, so we limit sales, we price things a certain way,” said Bobby Kim, founder of L.A.-based brand The Hundreds. “But right now, there is no lasting 100 years, it might be 100 days.”

Many small brands are suffering a critical lack of cash flow after having to close their own stores, and seeing wholesale orders canceled. The California order to shut down all nonessential businesses has reduced their capacity to ship, and put much of the focus on moving through existing inventory, with future collections in question. Samples are coming in piecemeal, and some sku’s are being canceled, depending on where they are being produced. (Like California and New York, Italy and India have both had manufacturing closures.)

To cope with the sudden downturn, some designers have cut payroll and slashed production runs. Katherine and Margaret Kleveland of Doen have stopped shipping until mid-April, though the designers are continuing to pay employees.

“We’re all drowning,” said Kim. “Things I said ‘no’ to a week ago, now I say, let’s try it, let’s go out in a blaze of glory,” added the designer, who launched an online warehouse sale with prices up to 60 percent off, “to try to get ahead of this thing” and reports “we’ve actually been doing quite well.” 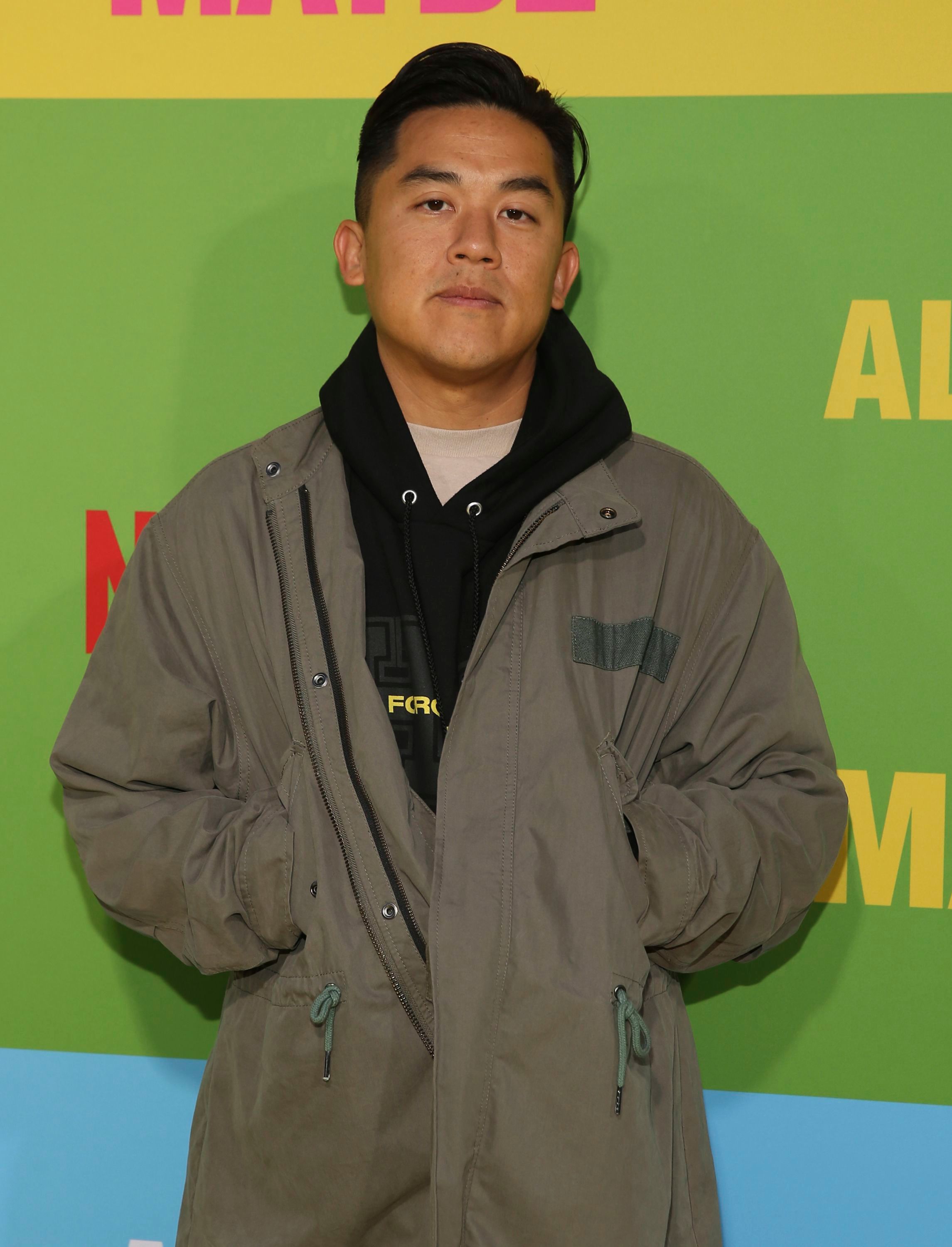 Part of that is the younger demographics of his streetwear base. “My customer is that kid who was at the Post Malone concert, or partying on the beach in Florida. A lot of those kids work for me. The content they are posting on social media is on a different planet than Gen X. That’s one thing in terms of business that works to our advantage,” Kim said, noting that he’s been chatting with customers on a new community text platform, and only 2 to 3 percent have mentioned the coronavirus. “In my responses back to them, I say take care of yourself and don’t be a hero. And they say one of the ways they do that is spending money on the brand. But eventually half of those kids will lose their jobs, or their parents will lose their jobs. Their income will dry up.”

To prepare, he’s been doing as much as he can to conserve, trimming a couple of people from his staff of 50, and cutting production by 20 percent. A bright spot has been his wholesale orders from Asia, which are holding as the region begins to see some relief. His manufacturing is continuing in Asia, though not his printshop in L.A. 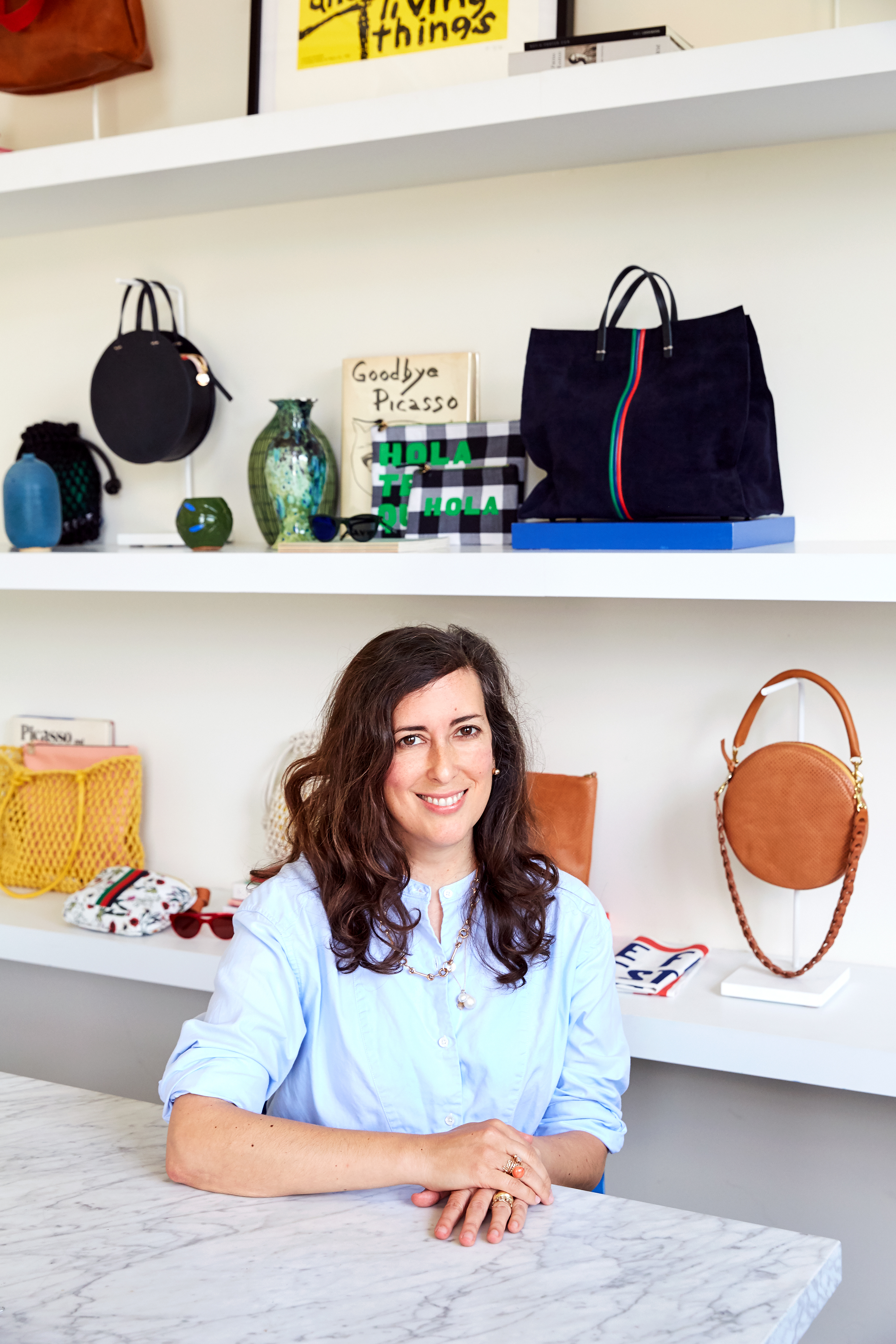 Designer Clare Vivier and some of the accessories she sells (top).  Courtesy

After closing her eight stores last week, accessories designer Clare Vivier slashed prices of her spring collection on her web store by 25 percent. She has also been on calls pleading with wholesale accounts to honor orders — which represent 30 percent of her business — some of which are sitting in her warehouse ready to ship, in an effort to protect 50 full-time employees. For now, her mostly L.A.-based production is at a standstill, though she is still shipping e-commerce.

“All bets are off…who cares, there’s no shame, we are all over-inventoried. I don’t care how it looks to the public,” she said of discounting. “The wholesale portion is out of our control.…We are dealing with the fallout of our majors, who are either canceling orders or reducing orders, so we’ve been on the phone to try to convince them, because they have deeper pockets. We are also working with them to drop ship because they have web sites with bigger resources and millions more followers.”

“We have a lot of specialty business with physical locations that don’t even have e-commerce to try to fight this, and also the big-box retailers panicking because they see their margins lowering and are trying to cancel orders. But there has to be a give and take,” said Santa Monica-based hat designer Janessa Leoné, whose e-commerce warehouse is shipping from Maryland. “All the risk can’t just fall back on the brands, big or small. It’s not in the nature of business to take deposits or prepayments from Nordstrom, Neiman Marcus and Shopbop, you create a contract and ship the goods. When that system breaks, it’s damaging. We have to take this day by day before it spirals out of control, everyone is on clearance and no one has new product for when we finally come out of this. And we will come out of this. But these are choices having an astronomical ripple effect on the economy.”

Leoné, like many designers, had been grappling with how, or even if, to launch her new collection in the midst of a crisis. “I went back and forth about whether anyone wanted to hear about COVID-19 from an accessories designer.…Usually, we’re balancing the aspirational travel aspect and packability with the functional protection aspect. But people aren’t traveling now, and we don’t want to open a wound. But honestly, the truest moments in life are walking around the block with your partner, so we are digging into those.”

“This is a time to get in tune with your social media following, and not just filling the airwaves with, ‘hey, I have a new dress,'” said Ilse Metchek, president of the California Fashion Association. “Be purposeful, because even when the virus goes away, we’re in a new world. Designers should think about what their clients might need…what’s going to make them really happy, that first purchase.” 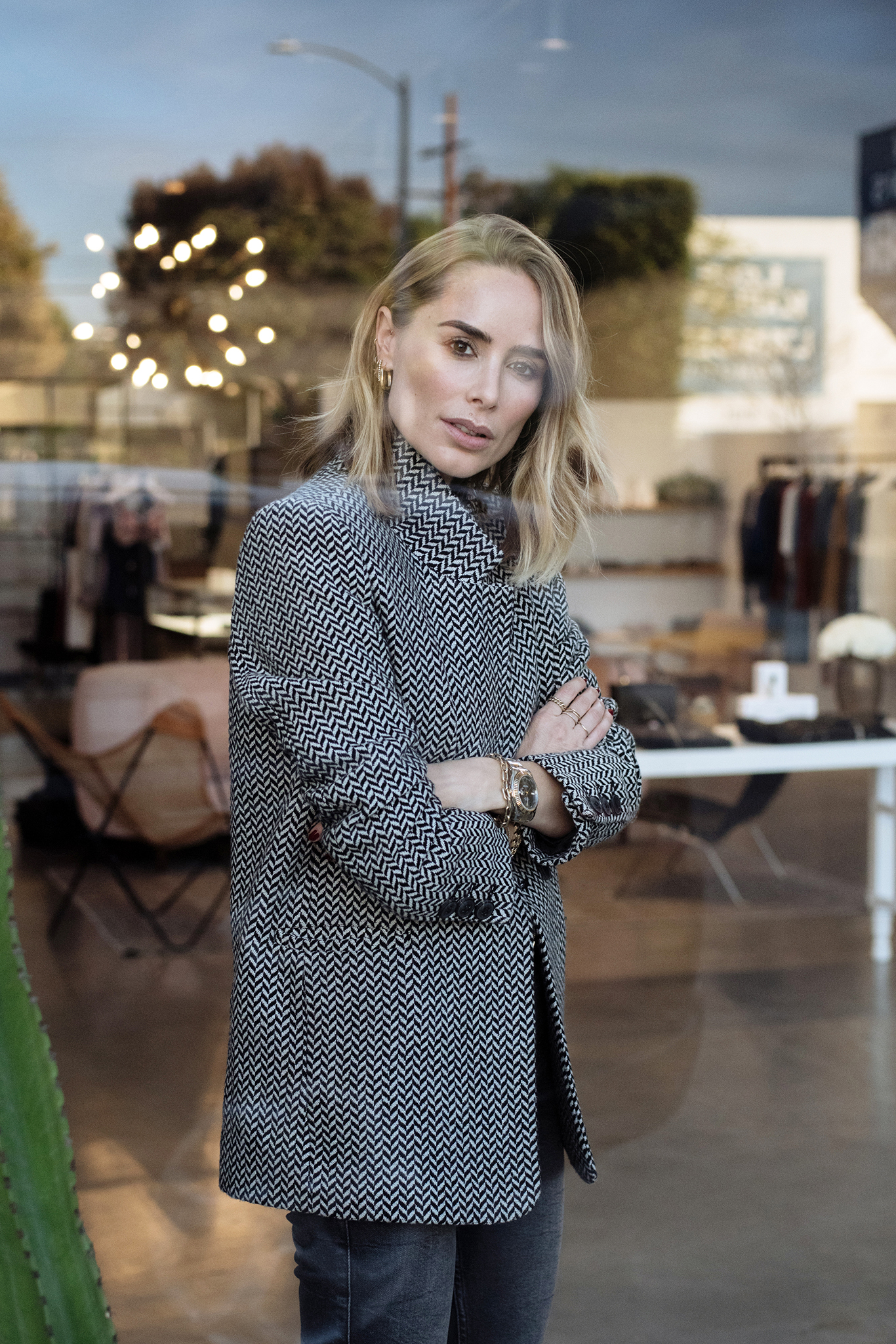 “We are still doing our weekly drops, people want their cozy T-shirts and sweatshirts, so it’s about adjusting,” said Anine Bing, sharing that the status of her production in Turkey changes “minute-by-minute.” “I’m encouraging my community to still get dressed in the morning, it makes it easier to get through the day,” said the influencer-designer.

To sell existing inventory, designers are getting creative, and giving back when they can. St. John is donating a portion of proceeds to Meals on Wheels, Cult Gaia to No Kid Hungry and George Esquivel to Giving Children Hope, while Michael Costello and ATS Sportswear/Bayside Apparel are shifting production to making masks.

Coming from a family of physicians, men’s wear designer John Elliott started giving 10 percent of his e-commerce sales to the UCLA Medical Center last week, and has been marketing stay-at-home looks on social media. It’s not so much of a stretch — he built his brand on the kind of modular everyday wear that LeBron James and other star athletes wear off court. But for Elliott, concerns about the fallout of the coronavirus run even deeper than his own business. “There are ways of make that have been passed down through generations in this industry, and as a brand, something I have enjoyed is finding those ways of make and bringing them out through our lens. Whether it’s handmade footwear in Italy or custom knits with spun yarns in Wakayama, Japan, there are so many mom-and-pop shops…I worry about them,” he said.

Entireworld founder Scott Sternberg had a 25-percent-off flash sale of his popular sweatsuits using stay-at-home messaging. “We’re trying to make things like sweats and Ts in optimistic colors…and it’s not cynical, it’s what we’ve been trying to do from Day One.…Fashion at this moment is about everything we are about, hopefully that can get us through in a cozy, comfy way,” he added, hinting at one thing many L.A. brands may have going for them to help weather the crisis; from Juicy Couture to The Great, they’ve always excelled in making the kind of clothes people live in every day — T-shirts and jeans.

While streetwear and the casual look had been on the decline in fashion, with the rise of tailoring and a new sense of polish, the new stay-at-home lifestyle could change that. “We’re building new habits,” said Rhuigi Villaseñor, designer of Rhude, who on Friday had a flash sale online to try to drive sales in the remaining hours before his e-commerce partner stopped shipping until April 21. It’s up in the air whether or not he will produce fall.

The order to close nonessential businesses came as a relief “after more than a week of a slow process of closing everything down,” said designer Heidi Merrick, who canceled a scheduled runway presentation for March 14. “We’re trying to stay positive that we’ll be back soon.” 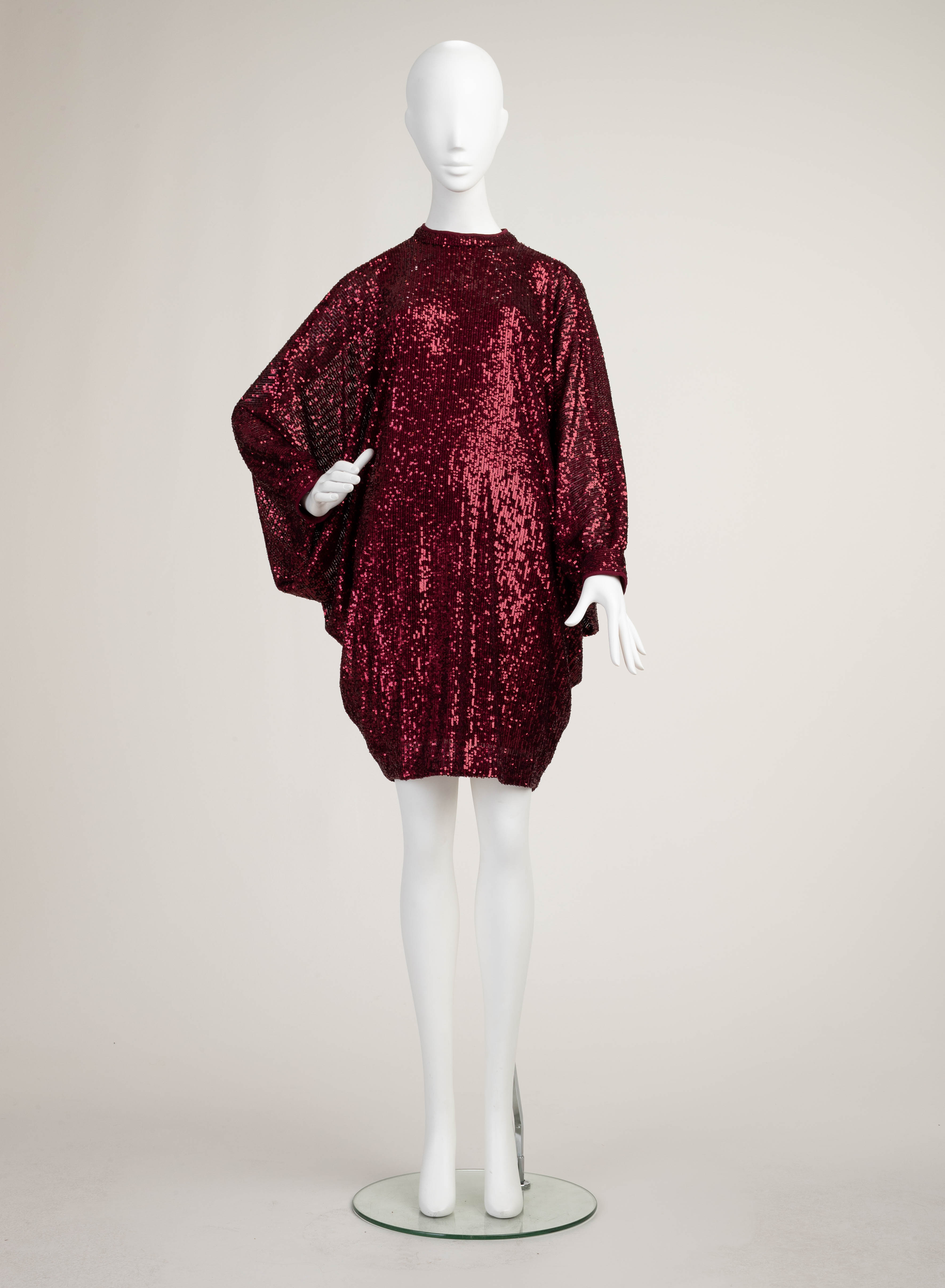 Trina Turk shot her holiday 2020 collection on mannequins instead of models.  Courtesy

Celebrating 25 years in business this year, resortwear designer Trina Turk has been through 9/11 and the 2008 recession. “This is much worse,” she said bleakly. “I would say everything is at risk.” To try to keep as many of her employees as possible, she enacted a 20 percent payroll reduction beginning last week until at least May. “I think the larger question is when this is all over, are we going to keep doing things the same way?” she said, noting that she had just done her first shoot ever — for holiday — using a mannequin instead of a model, with just three people, including herself, in the studio.

“To me, it makes you think about a total reset. But I’ve gotten conflicting messages. Someone sent me a picture of people lined up outside a Chanel store in China that just reopened. After being quarantined, they went rushing to shop. The image was sent like isn’t this great. But I question, is it great?  From an industry perspective, do we need to do 11 deliveries a year? Is it business as usual when things get back to normal or something totally different?”

Influencer Marketing in the Time of the Coronavirus

WATCH: Tips and Tricks for Working From Home