This weekend, Fred Segal will unveil its third L.A.-area store in Malibu, a 4,000-square-foot, sun-filled shop that is designed to be a beacon of SoCal style, down to the branded beach buggy parked outside. Never mind that Fred Segal the man is long retired, and that most of the clothing in the new store bearing his name isn’t even from here. Revealed just last week, the retail chain’s third new owner in seven years is counting on the fact that the name has a life of its own, conjuring palm trees, sunsets and surf — at least in its stores on the other side of the world.

For some in L.A., the Fred Segal name conjures only memories. Segal ushered in L.A.’s first designer jeans craze in the Sixties, creating a denim bar concept that welcomed The Beatles, Bob Dylan and the Jackson 5, then pioneered the shop-in-shop phenomenon at his retail centers on Melrose Avenue and later in Santa Monica. When the ivy-covered Melrose Avenue landmark was the temple of cool in the Eighties and Nineties, it was name-checked in films such as “Clueless,” “Legally Blonde” and “Less Than Zero,” and became the de-facto wardrobe department for such influential TV shows as “Melrose Place” and “Friends,” exporting the L.A. casual look through pop culture.

Its influential retail tenants and buyers were curators of style, picking up such SoCal-defining brands as Trina Turk, Juicy Couture and Hard Candy, sometimes during open calls, when a designer would open a car trunk load of dresses in the parking lot. And for several generations, it seemed like everyone in L.A. who worked in fashion had Fred Segal as a training ground, including the two Rons — Ron Herman and Ron Robinson — who now have their own retail empires selling SoCal style at home and abroad. 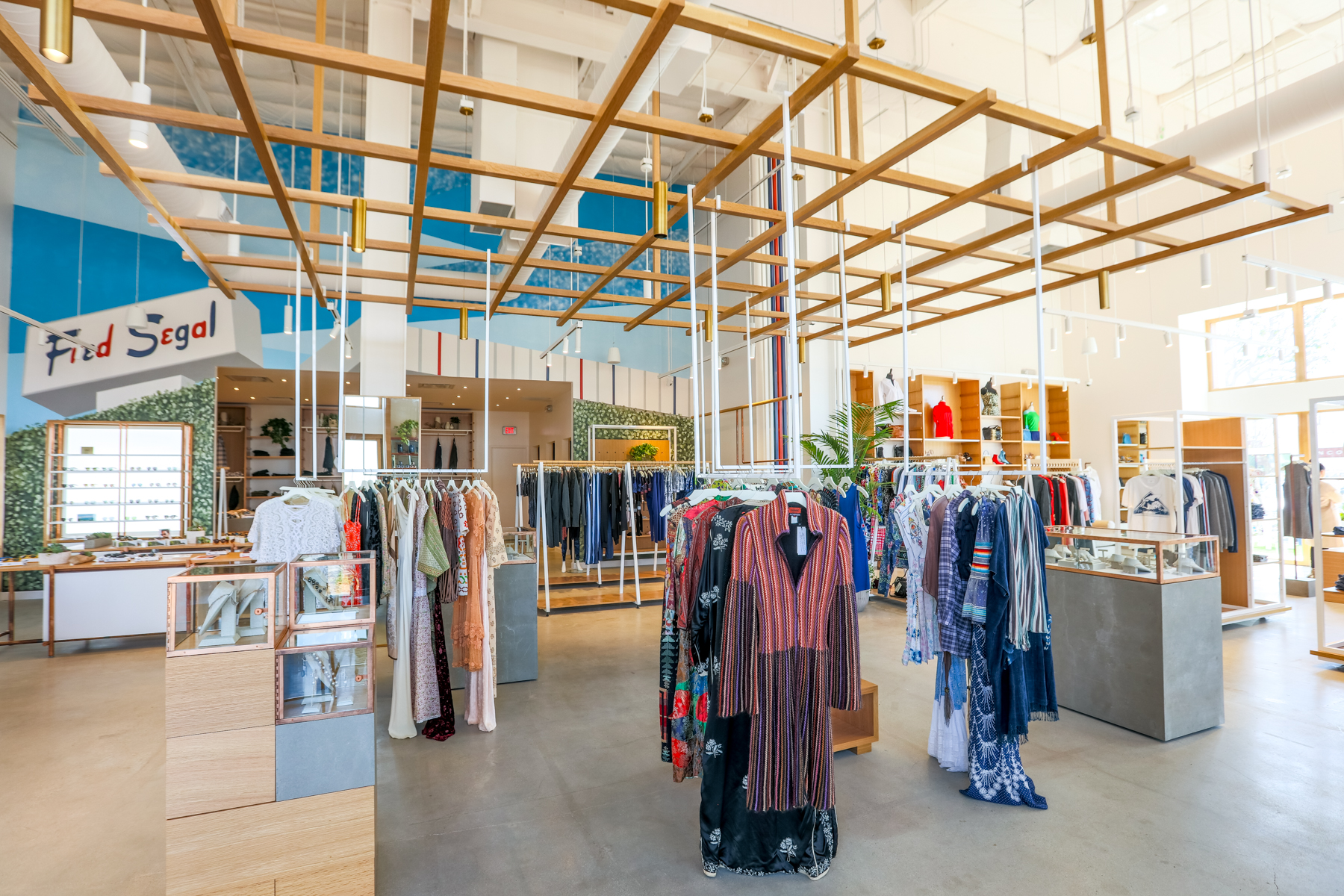 In 2012, the family sold the intellectual property to New York-based Sandow Media, which took things in a new, more tourist-oriented direction by opening a Fred Segal store at the Tom Bradley International Terminal at LAX, and opening (then closing) a Fred Segal store on the Las Vegas strip, full of branded T-shirts, natch, in addition to expanding the brand with licensed stores in Asia. (The physical centers on Melrose and in Santa Monica were not included as part of the Sandow deal.)

Fred Segal changed hands again in 2014, when the Creative Arts Agency-backed Evolution Media Capital acquired a majority stake and opened a 13,000-square-foot flagship at 8500 Sunset Boulevard. The store was positioned as a luxury tastemaker, and vendors were promised synergy between the entertainment and fashion industries, including events with CAA talent coming through, though few of those materialized. A relationship was forged with the Council of Fashion Designers of America to develop programming for the store, and to curate young brands in a pop-up space, which is showcasing Claudia Li, Lorod and Ph5. “Fred Segal is known for supporting emerging brands and niche designers,” said Li, who will have her first L.A. trunk show there next week.

But not everyone was pleased. “The second they started selling trucker hats, I said this is not luxury,” quipped one designer vendor who requested anonymity. 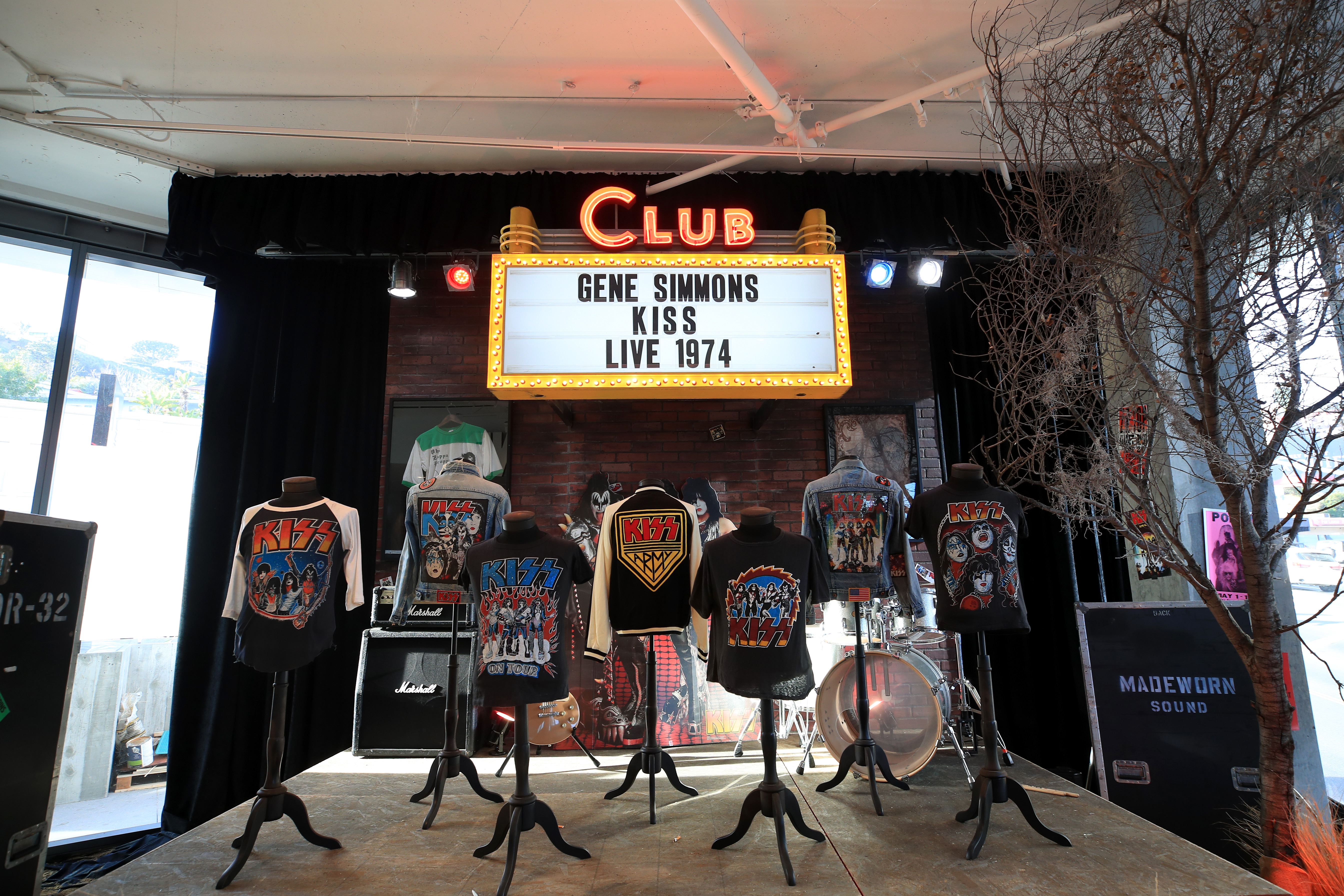 Fred Segal now exists in an L.A. fashion retail landscape that is more diverse and spread out. In the last decade, native brands that once needed incubation at a retail center like Fred Segal have come into their own, and opened their own boutiques. From its Sunset Boulevard location with confusing underground parking, it must compete with Kitson (which has had its own problems), beachy Aviator Nation and Toms on Abbot Kinney; the luxury boutiques of Melrose Place; the arty creators in Silverlake and Echo Park; the streetwear meccas on Fairfax and La Brea, and the outliers in downtown L.A.’s Arts District.

Still, the flagship has many of the ingredients for success. The store stocks several of the local brands defining L.A. style now, with shop-in-shops from arty Libertine; resortwear purveyors Staud and Cult Gaia; eco-minded Atelier and Repairs, and rock-‘n’-rolling MadeWorn, alongside offerings from outside-of-L.A.  Shrimps, Rosa Cha and LoveShackFancy. There are curated books (“Life at the Marmont”), Fred Segal branded T-shirts and candles (including an Ojai scent), rotating activations, including a vintage pop-up, and there are the added attractions of a foodie haven (Tesse restaurant) and a Kith store downstairs that helps bring in some sneaker-hunting traffic. 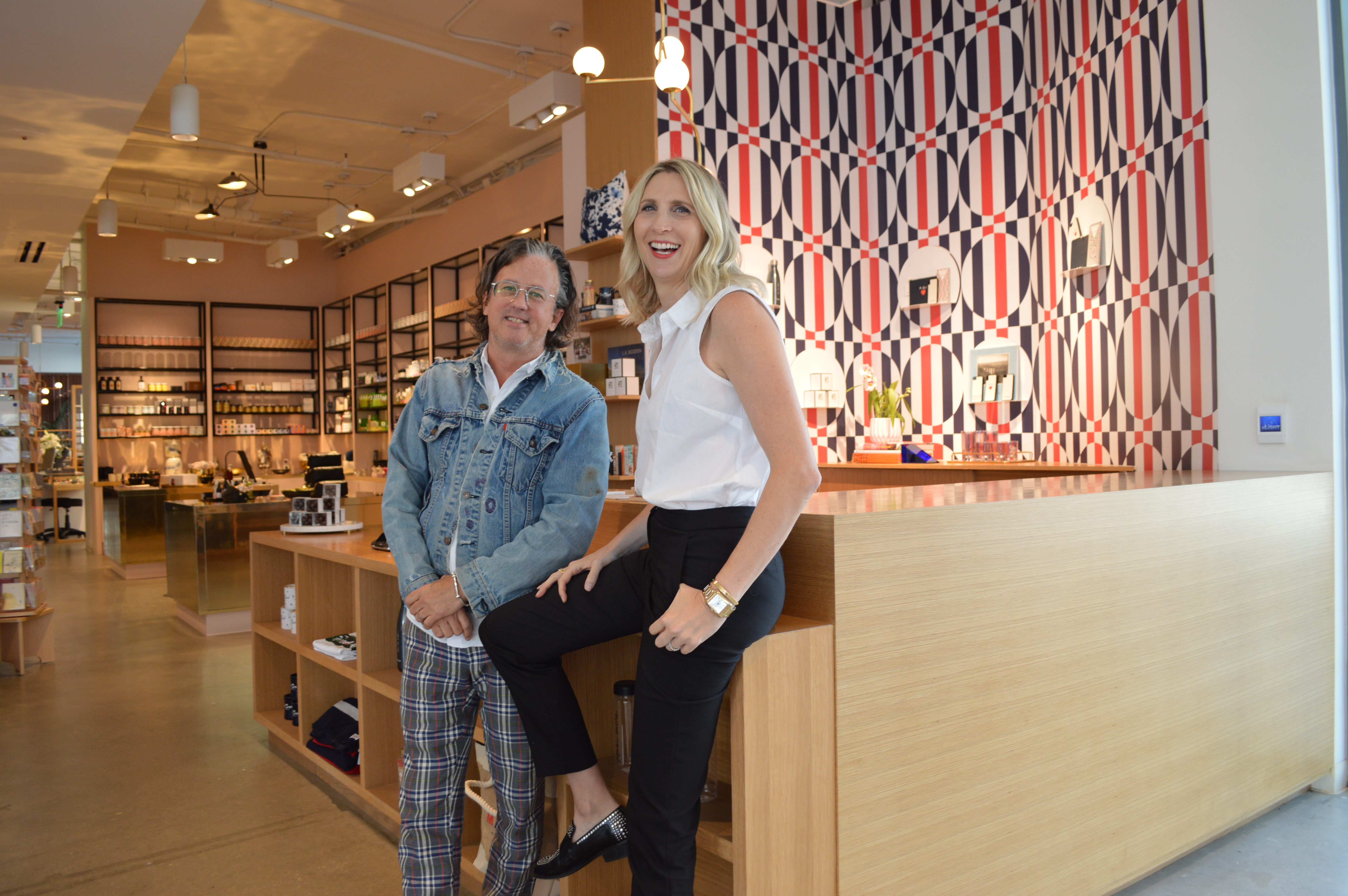 Yet some vendors I spoke to who sell there or have sold there (all of them on consignment, per the partner model) report the experience has been uneven and sales disappointing. They complain about a lack of vision, leadership and community, and ongoing confusion in the marketplace between the new Sunset flagship and the former Melrose location which still has a Fred Segal sign out front. (The Melrose center, which is not owned by Fred Segal LLC, is occupied by several retail tenants, including Ron Robinson and Ron Herman, who happens to be the real Fred Segal’s nephew in a Shakespearean twist. The sign has been the subject of ongoing litigation, which itself proves the value of the Fred Segal name.)

Allison Samek, chief executive officer of Fred Segal LLC, defends the Sunset store’s performance: “Since opening at the end of 2017, we have exceeded annual sales projections for our first year by over 15 percent. As with any store, Fred Segal has areas of incredibly high performance and areas that we learn are not what our customer is looking to discover. True to the brand’s DNA, we are risk takers and always look to find new and experimental brands and categories,” she said, nothing that the store had multiple partners with sales close to $2,000 per square foot last year and most sold more than $1,000 per square foot.

“On average, Sunset partners exceeded dollars per square foot compared to the legacy Santa Monica shops in their first year,” she added, noting that the store has a waiting list for partners. “Each of our current or past 30 vendors might have a slightly different experience or might define success differently. As always at Fred Segal, we welcome the opportunity to present the customer with our unique experience and point of view.”

Certainly, brick-and-mortar is challenging all around. Concept shops are not novel anymore (L.A. has Maxfield, newbie Just One Eye and now its own Dover Street Market), nor are they a sure thing (Colette). And consumers can discover new brands without leaving the house, on Instagram. Casual L.A. style doesn’t only belong to L.A.; it’s the way of the world, being exported from all points, including by Virgil Abloh at Louis Vuitton in Paris. 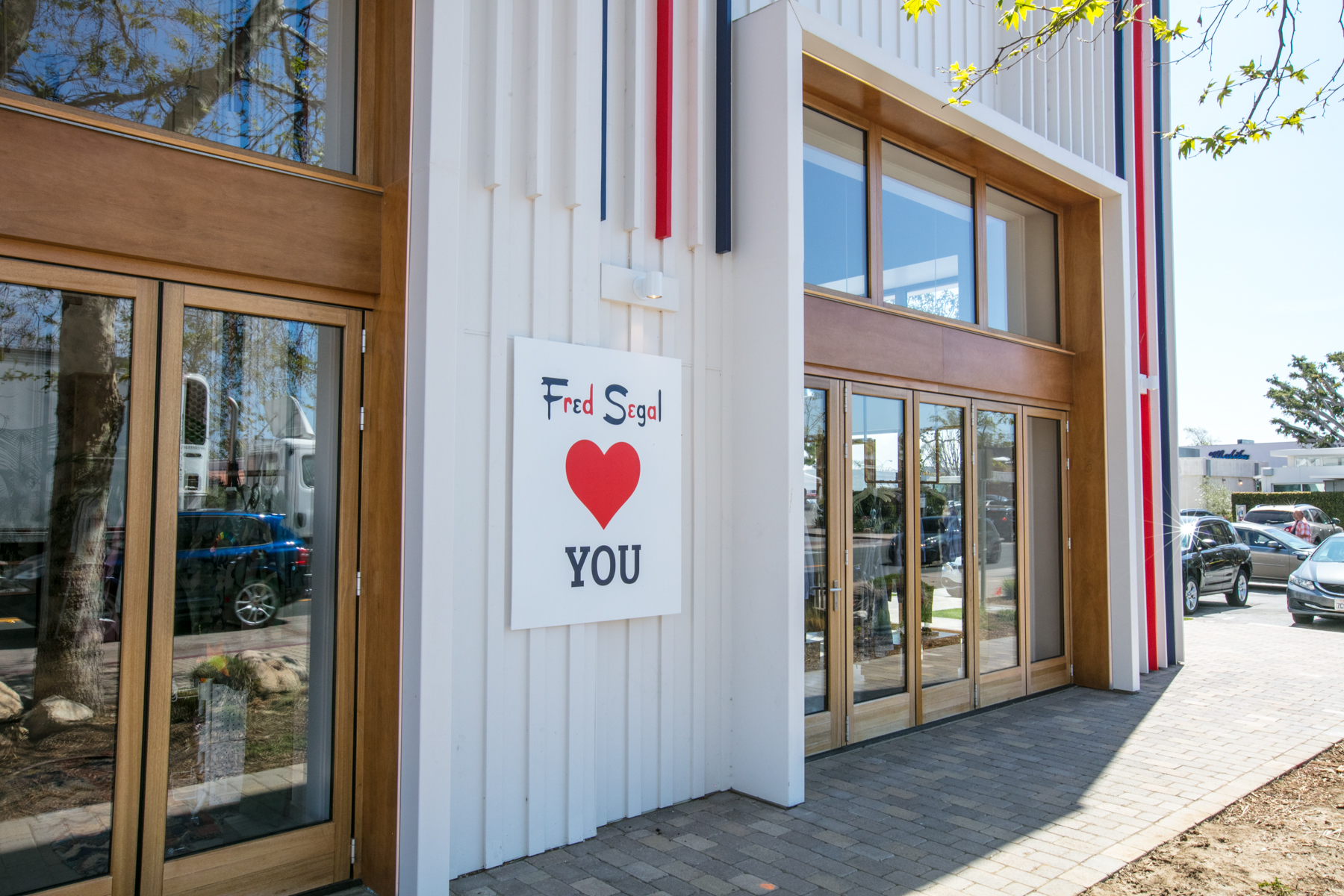 Enter Fred Segal’s new owner, a global brand-licensing agency that has created partnerships around such famed heritage brands as the Hollywood Sign. Global Icons has brought the Fireball liquor and Ford Motors names to apparel, but this is the first fashion brand it has owned. The plan is to open more retail doors internationally, adding to a roster of licensed stores already in Taipei, Taiwan; Kuala Lumpur, Malaysia; Zurich, and Basel, Bern and Lausanne, Switzerland, to sell more branded apparel and private-label clothing.

To keep the image intact (and make a logo T-shirt in Kuala Lumpur mean something) Fred Segal has its sunny SoCal showrooming locations, including the new one in Malibu, where it opened way back in 1975, when Segal was a retail pioneer in the sleepy beach town, helping to establish what is now known as the Malibu Country Mart.

It’s certainly not the first time a SoCal brand has become more valuable as an export (Giorgio of Beverly Hills, Bijan, Camp Beverly Hills and more). So maybe it doesn’t matter what Fred Segal is selling, other than itself with a whiff of nostalgia. The new Malibu outpost is light and bright, which may be the most L.A. thing about it. The merchandise (curated by two vice presidents of merchandising, in partnership with Maris Collective, an L.A.-based company that creates retail mostly for hotels, including several Four Seasons properties) is a curious assortment of denim from New York-based 3×1, handbags from San Francisco-based Senrese, Samantha Sung print shirtdresses and upcycled vintage pieces from Morphew, also both New York-based. From L.A., there are Sol Angeles T-shirts, custom embroidered pieces by C. Bonz, Garrett Leight sunglasses and Moon Juice. (For a more authentic experience, perhaps, there are locally born brands with stores mere steps away, among them James Perse and Heidi Merrick.)

Even if it’s not a must-visit, at least not yet (new merchandise is still rolling in ahead of the weekend opening), there’s something cosmic about this newest temple of L.A. style opening in the former Malibu Cinemas. Like Marilyn Monroe, Jimi Hendrix and all the famous Hollywood entities who now live on candles, coffee mugs and T-shirts, Fred Segal has a new story, and it may be the most L.A. one of all. 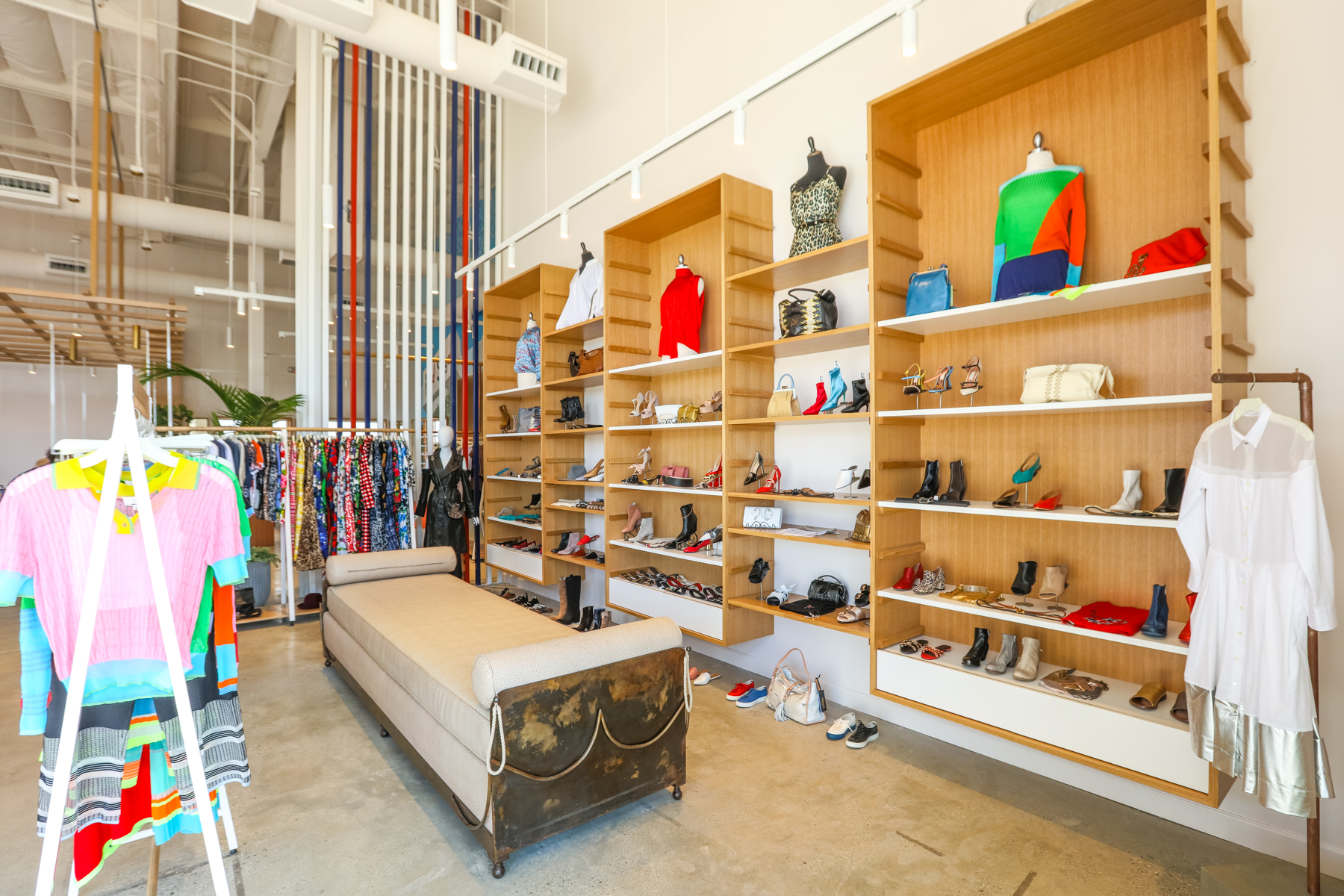