Moore From L.A.: How L.A. Does the Runway

By designing vegan, going back to the land in Ventura, and protesting with indigenous streetwear on the steps of City Hall. 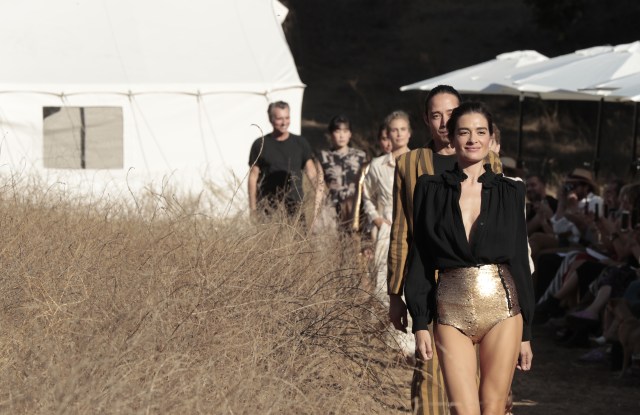 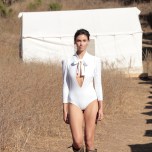 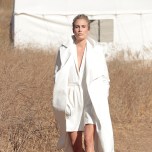 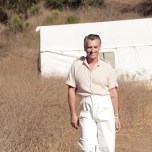 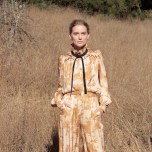 This past weekend, in addition to California Gov. Gavin Newsom signing historic legislation banning the sale and manufacture of fur, fashion events held in a downtown L.A. theater, on a Ventura hillside reborn after the deadly Thomas Fire, and on the steps of City Hall, said a lot about what L.A. fashion stands for right now — animal rights, indigenous rights, going back to the land, localized production, community building — and where fashion in general could be heading.

While L.A. doesn’t have a single unified fashion week like other major industry capitals — and the CFDA/Vogue Fashion Fund event that for years brought together designers and celebrities for a runway show at the Chateau Marmont has officially been shelved, there was still a lot worth paying attention to.

“I want to grow and establish L.A. as the ethical fashion destination of the world,” said creator Emmanuelle Rienda, a Paris transplant who is also the founder of creative agency Le Frenchlab, adding her next big pitch for change now that the fur fight is won, at least in California: “We want to show that the labor industry is just as cruel as the leather industry.”

The colorful crowd nibbled on vegan cheese and faux tuna sliders while waiting for the awards portion of the evening, which recognized vegan red carpet stylist Tara Swennen, and vegan hairstylist Thomas Silverman, among others.

“The younger generation has such a desire for change,” said Suvari, wearing a jumpsuit by the New York-based vegan fashion brand Enda, with which she’s working on a fashion collaboration. 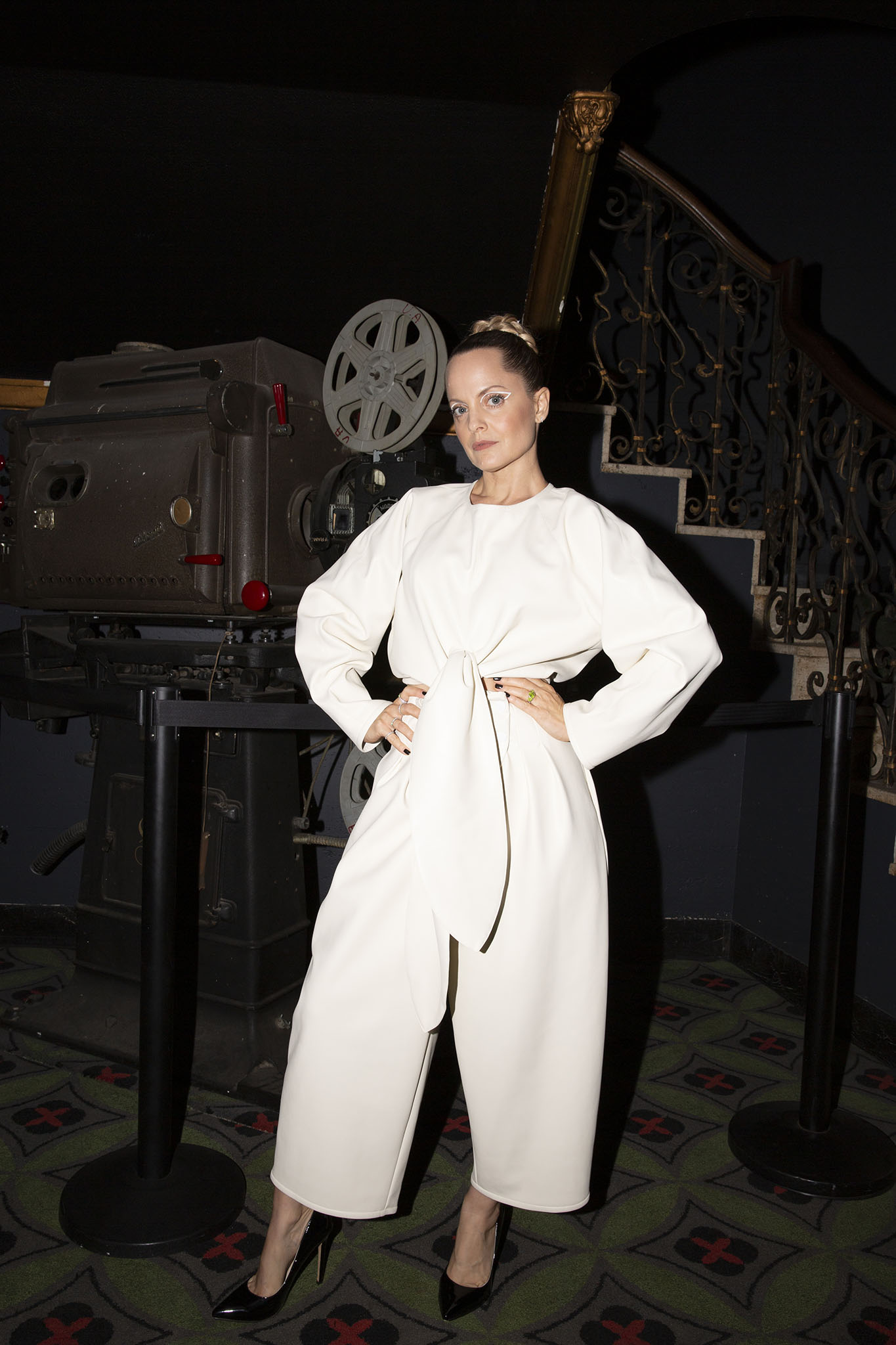 Among the designers in attendance was Erika Maish, an L.A. native who recently graduated from Central Saint Martins and showed at the British Fashion Council’s Positive Fashion exhibition during London Fashion Week in September. “I am inspired by growing up in L.A., and the Southwestern desert towns I used to visit as a kid, where they made houses out of glass bottles. I like the way of thinking that you can make something out of anything,” she said of her upcycled pieces, including a Paco Rabanne-style mesh jacket and skirt made of discarded soda can tabs. 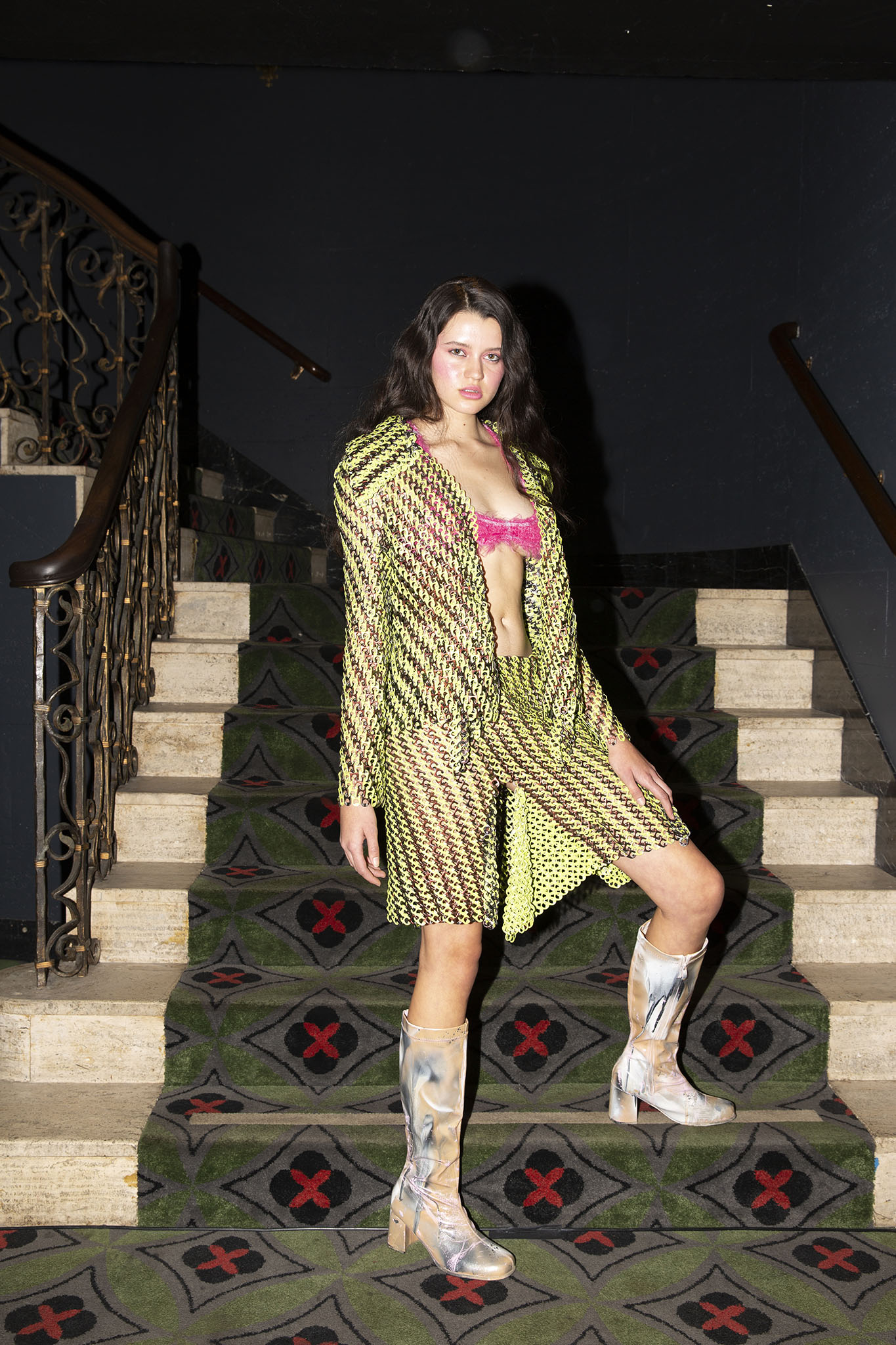 On Friday at the Petersen Automotive Museum, independent fashion show producer Arthur Chipman, himself a British expat, touted his L.A. Fashion Week event, which stretched over five days with support from several corporate sponsors and a lot of free-flowing booze, as being about “an immigrant’s story.” Participants ranged from young designer Noe Bernacelli, dubbed the “Peruvian Valentino,” who opened the week, to Coral Castillo, the L.A.-based Mexican-American designer who nabbed the local Moss Adams Fashion Innovator award for her darkly romantic crochet evening wear.

“A lot of brands are looking at L.A. as a great p.r. play; it resonates for red carpet and streetwear,” said Chipman, whose events welcoming designers from all over the world don’t attract much in the way of celebrity attendance or press coverage, but nevertheless keep chugging. (Julien MacDonald was originally slated as a headliner but had to drop out due to scheduling conflicts, Chipman said.) 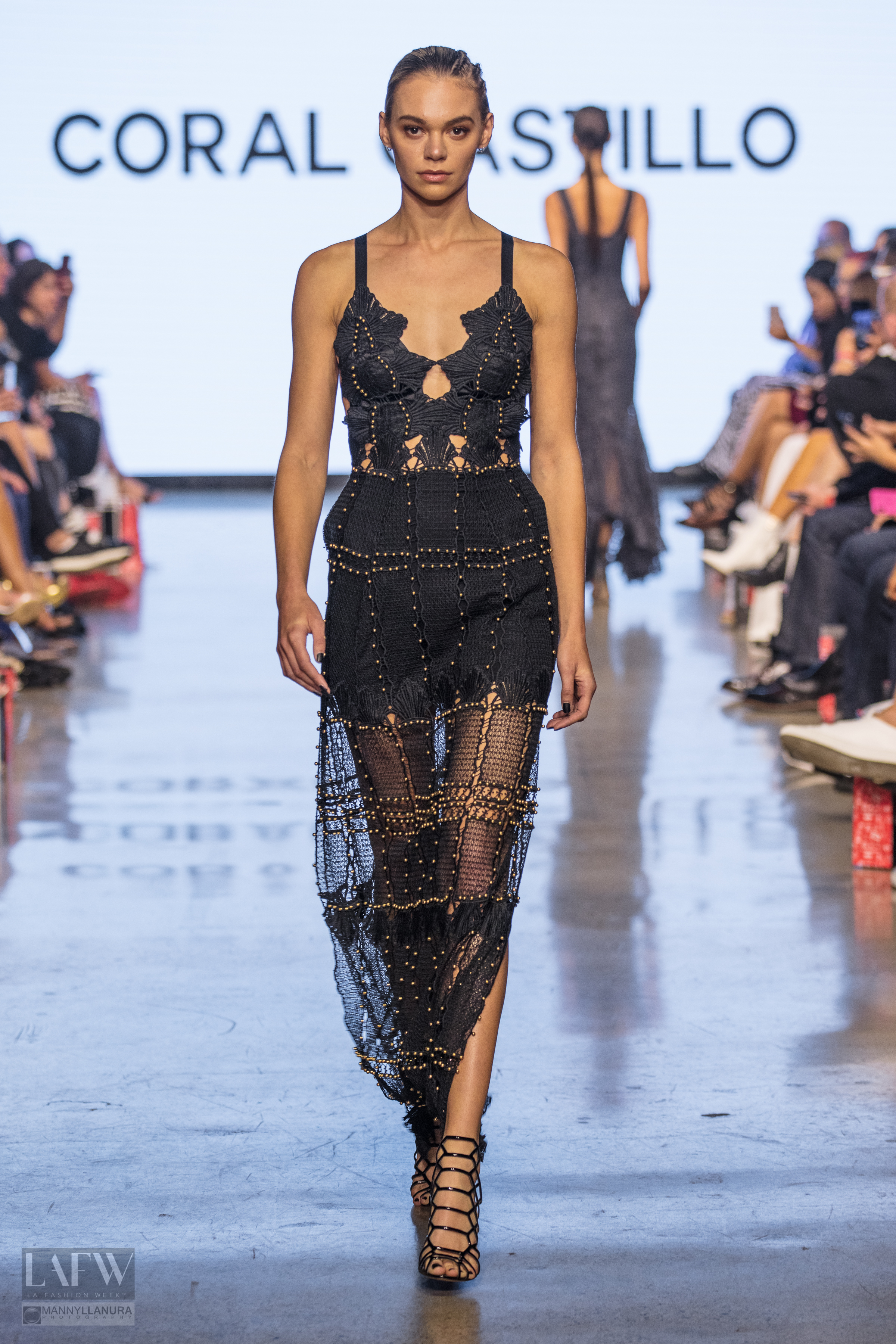 Saturday afternoon, L.A. designer Heidi Merrick held a decidedly more intimate runway affair on the rustic plot of land in Ventura where she and her family spend weekends sleeping under the stars in a yurt. The daughter of renowned surfboard shaper Al Merrick, she has over the past 13 years carved out a place for her own namesake California minimalist brand, with a wink at her surf heritage and a nod to the kind of old Hollywood tailoring Katharine Hepburn would have loved.

Despite the Saddleridge fire flaring up just days before in the San Fernando Valley, Merrick was determined to bring friends and family to her fire-recovered hillside, where they walked through a small apple orchard to get to their seats. “That was the only thing that didn’t burn,” Merrick said of the trees. 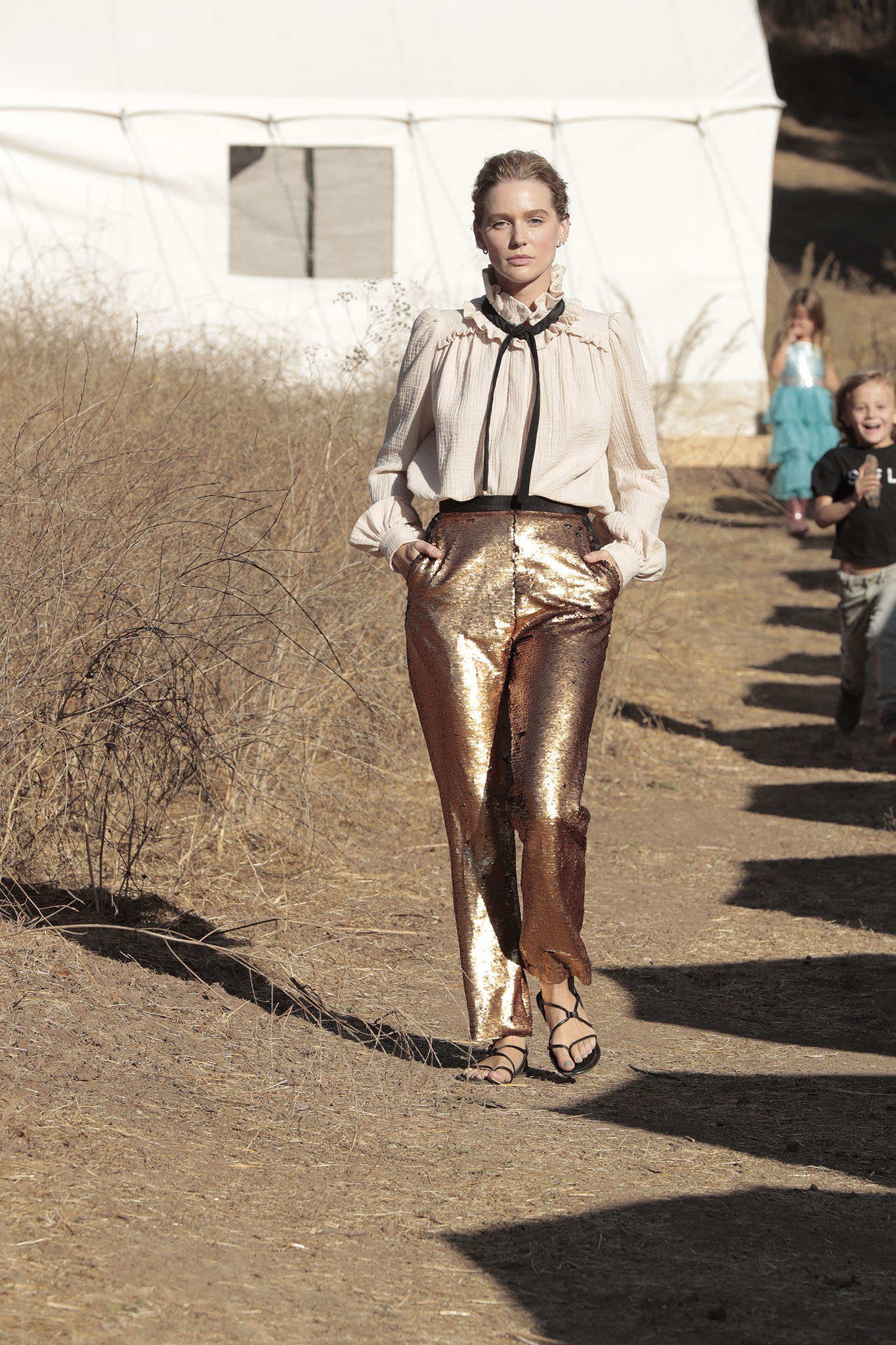 The designer, who is pulling back from wholesale to sell only direct-to-consumer to be able to continue to produce in America and have workable sales margins, said she wanted to have her first runway show to make a statement about who she really is. “For so long, retailers have said, ‘You’re Heidi Merrick, you’re from California, we want it to be like this,'” she said. “But we live such a broad life. I weekend like this,” she said, motioning to the blouse and shorts suit styled with Hunter boots in her lineup, “and I city like this,” she said of her own outfit, a tailored black blazer bodysuit tucked into a skirt-pants combo piece, worn with flat sandals and Celine sunglasses.

Merrick is a local gem (she has a store in downtown L.A. and is exploring future locations on the Westside and in Santa Barbara), and one gets the sense she is ready to own that. “I’ve been thinking, because of globalism, everyone is getting everything. My power is my authenticity.”

The same power was on display in the runway show of “fashioned resistance” at Sunday’s Indigenous People’s Day celebration in front of City Hall, where L.A. streetwear hero and author Bobby Kim of The Hundreds fought the fashion tide of cultural appropriation by instead helping to shine a light on Native American streetwear brands. He did so by collaborating with Lakota/Omaha/Dine activist and hip-hop artist Nataanii Means, son of the late Russell Means, and his Obsidian Collective. 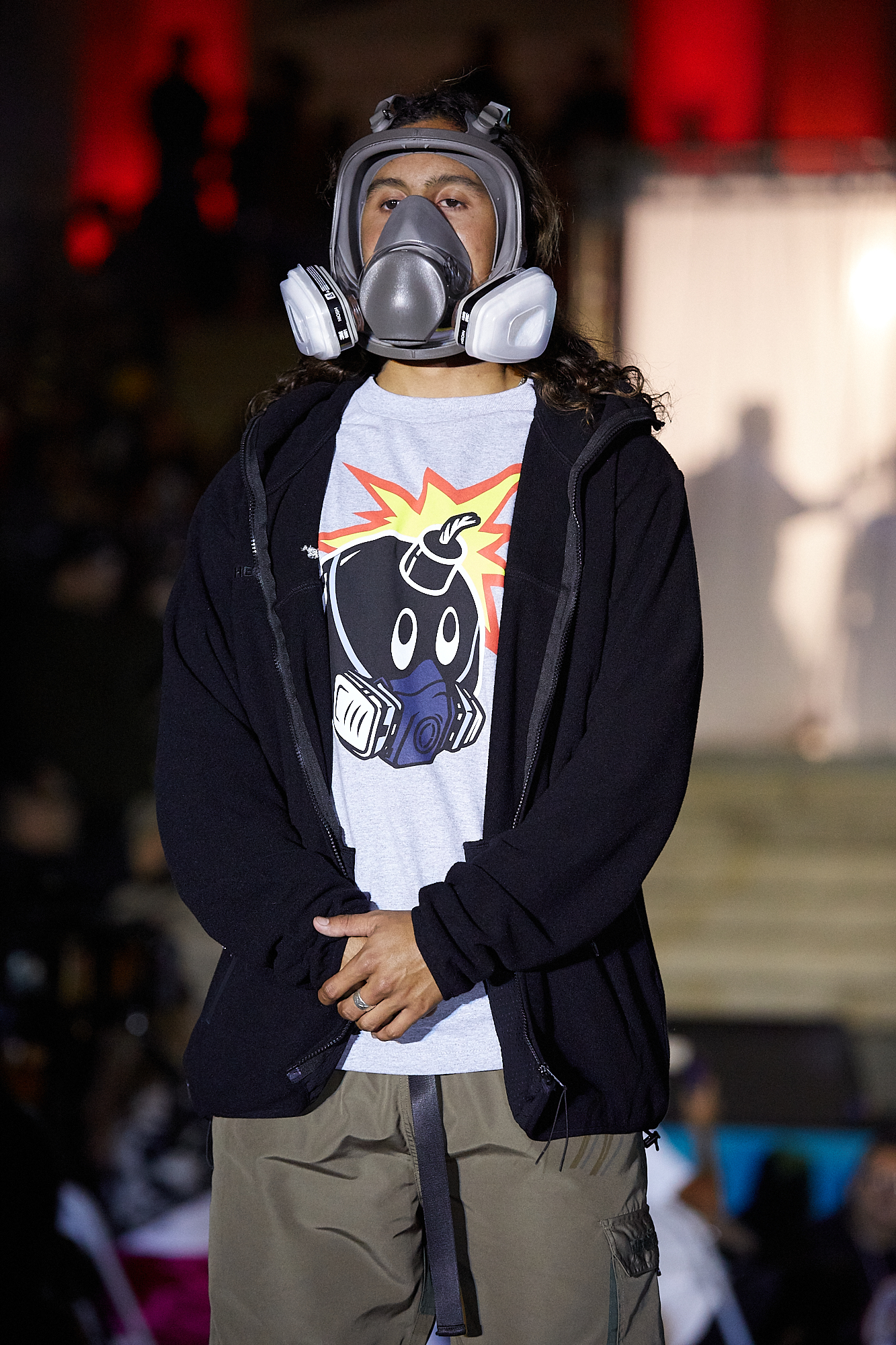 The Hundreds x Obsidian Collection was shown at the Indigenous People’s Day celebration at L.A. City Hall on Oct. 13.  Courtesy

“The gas mask is symbolic, we grew up fighting for our freedom and for our treaties to be respected. When we were out in North Dakota in the fight for seven months, there were times the mass media didn’t even know we were being teargassed. We had to have what we called our kit, which is a bag with gas masks, with us at all times,” explained Means.

“I was really ignorant of Native indigenous streetwear and their history and community in general…I’m still learning every day,” said Kim, who met Means after he reached out to offer warm clothes for his crew while they were protesting pipeline construction during the winter months. “L.A. is actually Tongva land, simple things like that, I had no idea. Once we decided to dig deeper, they told me kids on the reservation love streetwear, they grew up wearing our stuff. But they have their own brands, too, and I said we should highlight them. We have to hoist them up.”

The Hundreds x Obsidian collection — made in collaboration with Native streetwear brands OXDX, Articles of Reziztance, First Citizen, and Section 35 — is being sold online and in the Hundreds store located on streetwear mecca Fairfax Avenue.

For Means, it was only fitting that the event came together in L.A. “Our voice has been so pressed down in mainstream markets like Hollywood. There are over 500 separate nations in this country alone…and to be able to tell our stories here in a place where we’re portrayed in the movies as savages…it’s us reclaiming our story and telling it ourselves. That’s what Bobby has allowed us to do,” he said. 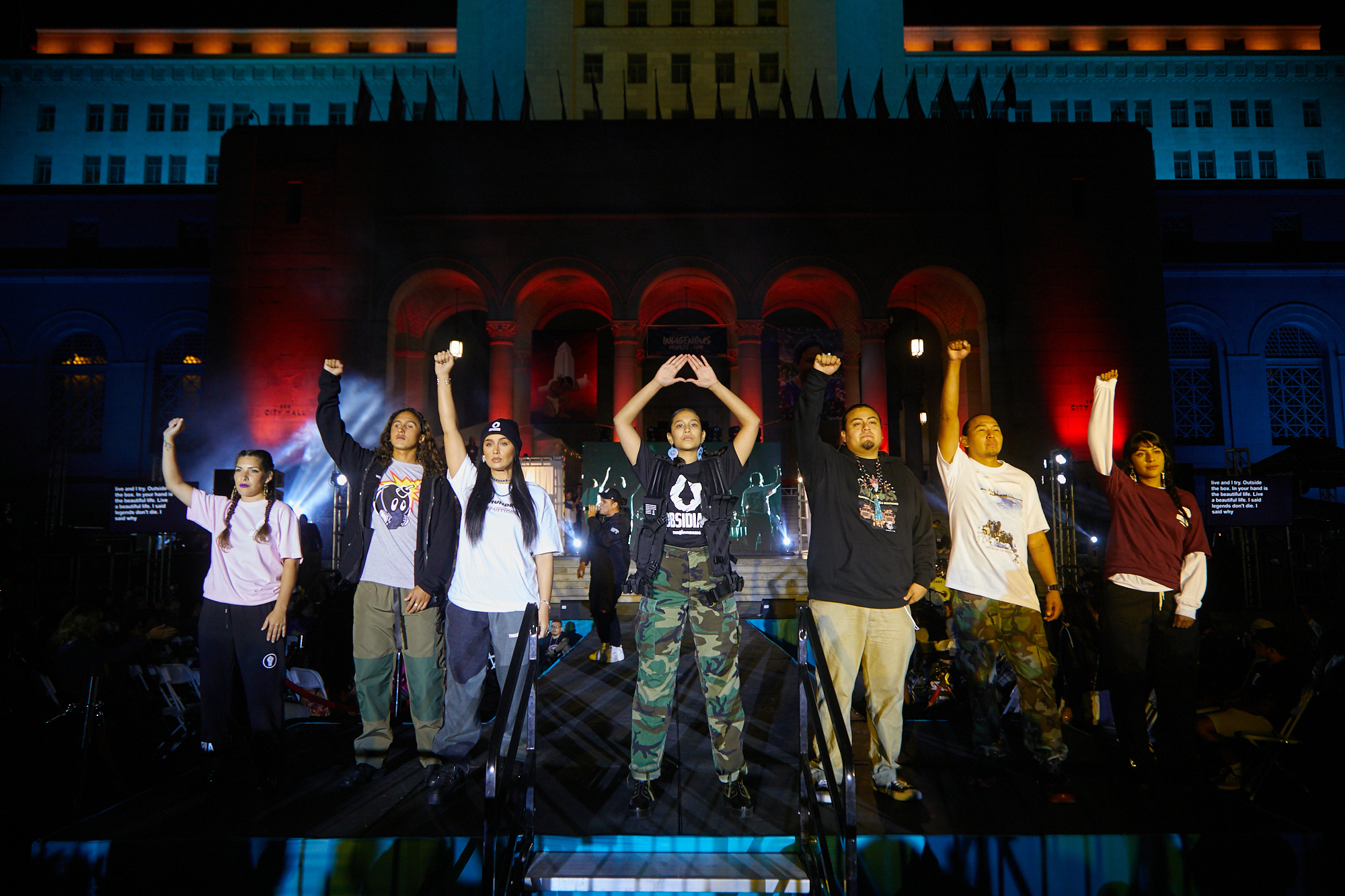