Moore From L.A.: In Paris, Everyday Grandeur Reigns and Green Is the New Black

Model on the Valentino spring 2020 catwalk.

It wasn’t the Chanel runway crasher, the Rick Owens bubble makers or Mr. Funkadelic himself, George Clinton, at Sacai that stuck with me most this week (though all were awesome). It was a quaint scene on the balcony of an apartment building across from the Valentino show, where a couple had set out a white tablecloth and wine to watch the runway feast.

They just wanted to catch a glimpse of the grandeur (some of their balcony neighbors even had binoculars in hand). And grandeur is the word that comes to mind for the season; Paris wouldn’t be Paris without it. And neither would fashion, no matter how comfortable are jeans, leggings and sneakers.

It could be nostalgia for a going, going…and bygone era — pre-impeachment, pre-yellow vests and pre-revolution. But it seems more like a calculation by designers that they had to go big, even with ready-to-wear, or go home. Which could also explain the crazy number of looks in some runway collections, including Dior and Balmain. (Who can take it all in? And what kind of a sustainable message is that?)

Certainly there was lots of couture-like fantasy — in the lush, trailing coats and billowing skirts by Christian Lacroix, welcomed back to the runway like an old friend by Dries Van Noten; in operatic, swallow-your-gender-whole “Orlando” skirts at Comme des Garçons; Luis Barragán-hued infanta gowns at Rick Owens; modern-day Marie Antoinette pannier dresses by way of English craft at Loewe, and pleated lame Hershey’s Kiss creations at Balenciaga. 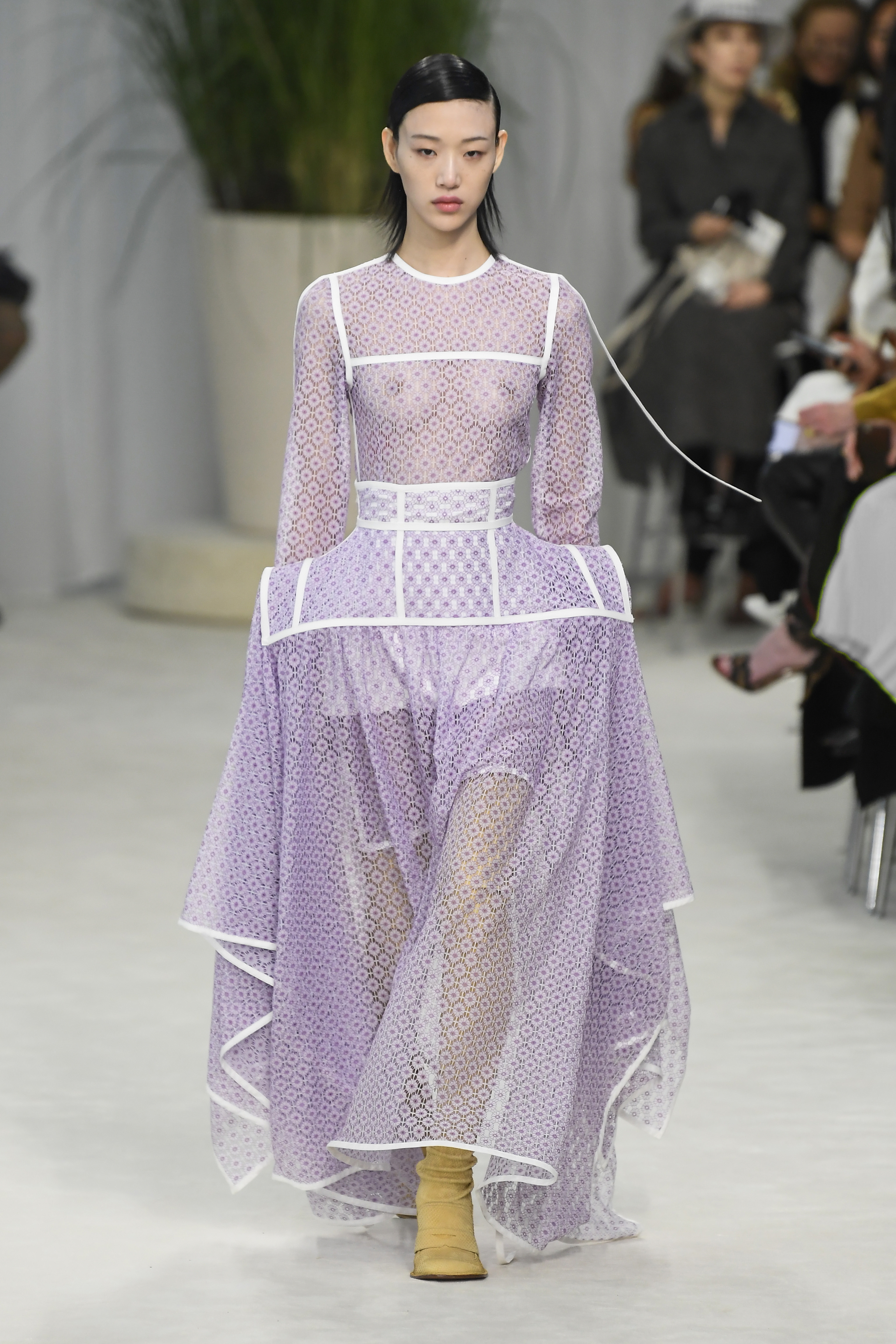 But more immediate and (commercial) was the everyday grandeur that nearly erased streetwear from the map. That is what Pierpaolo Piccioli can do so well at Valentino, giving white shirts and shorts as much design as a ballgown. (No wonder he had an audience both inside and outside the fashion tent.) Same with Sarah Burton at Alexander McQueen, who brought Irish craft and the human touch to her signature romantic tailoring, achieving the golden mean of aspirational and approachable. Ditto Junya Watanabe, whose imaginative riffs on the trench coat ranged from fit n’ flare dress to covetable tailoring-meets-corsetry T-shirt worn over neon-print workout pants and sneakers for SoulCycle grandeur. 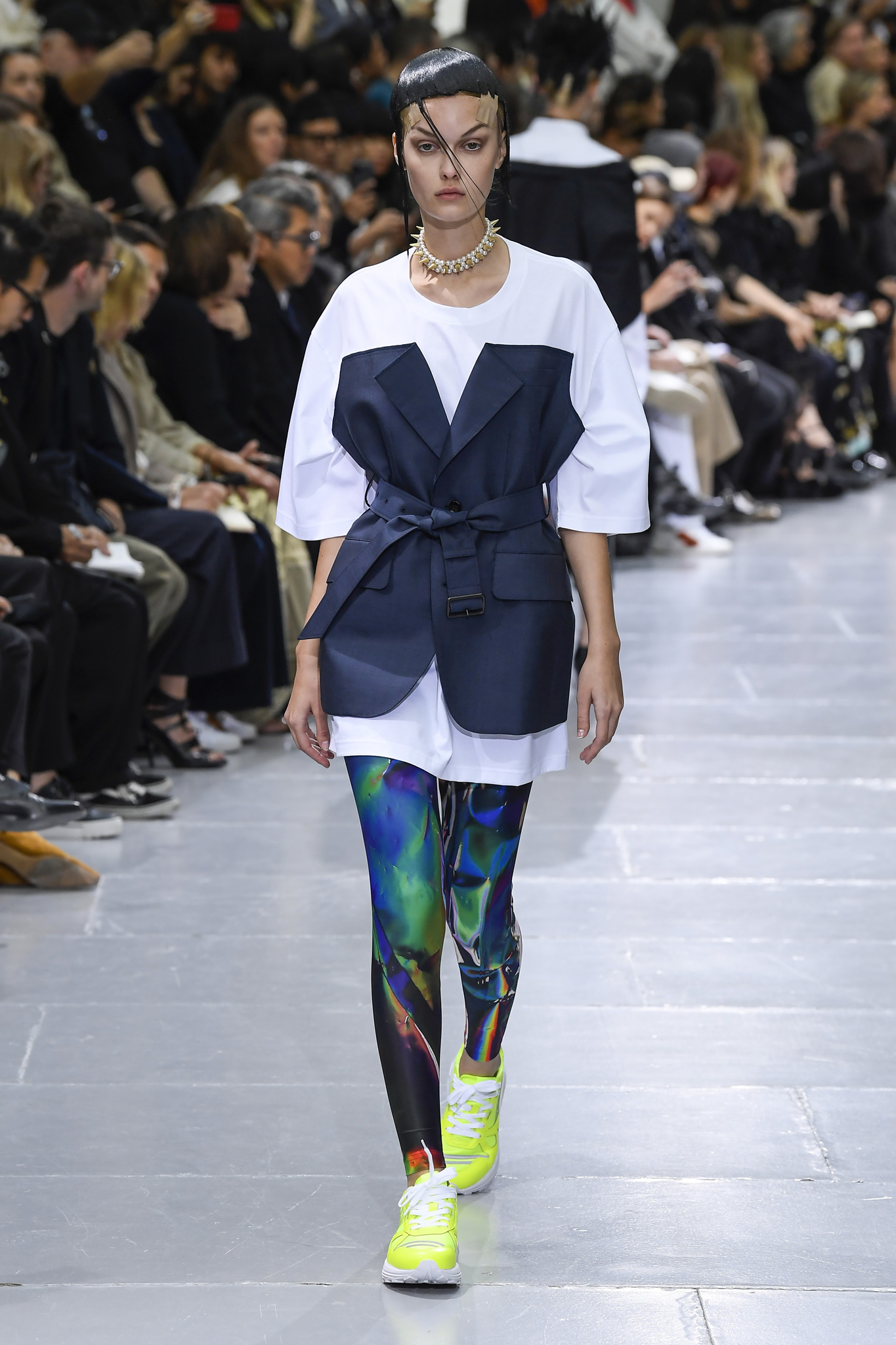 Marine Serre’s ballooning, recycled, black nylon raincoat, and lady suits made out of upcycled white tablecloths also managed to be transporting while feeling familiar, with a sustainable message one almost forgot because the collection was so beautiful. That’s really what you want, right? 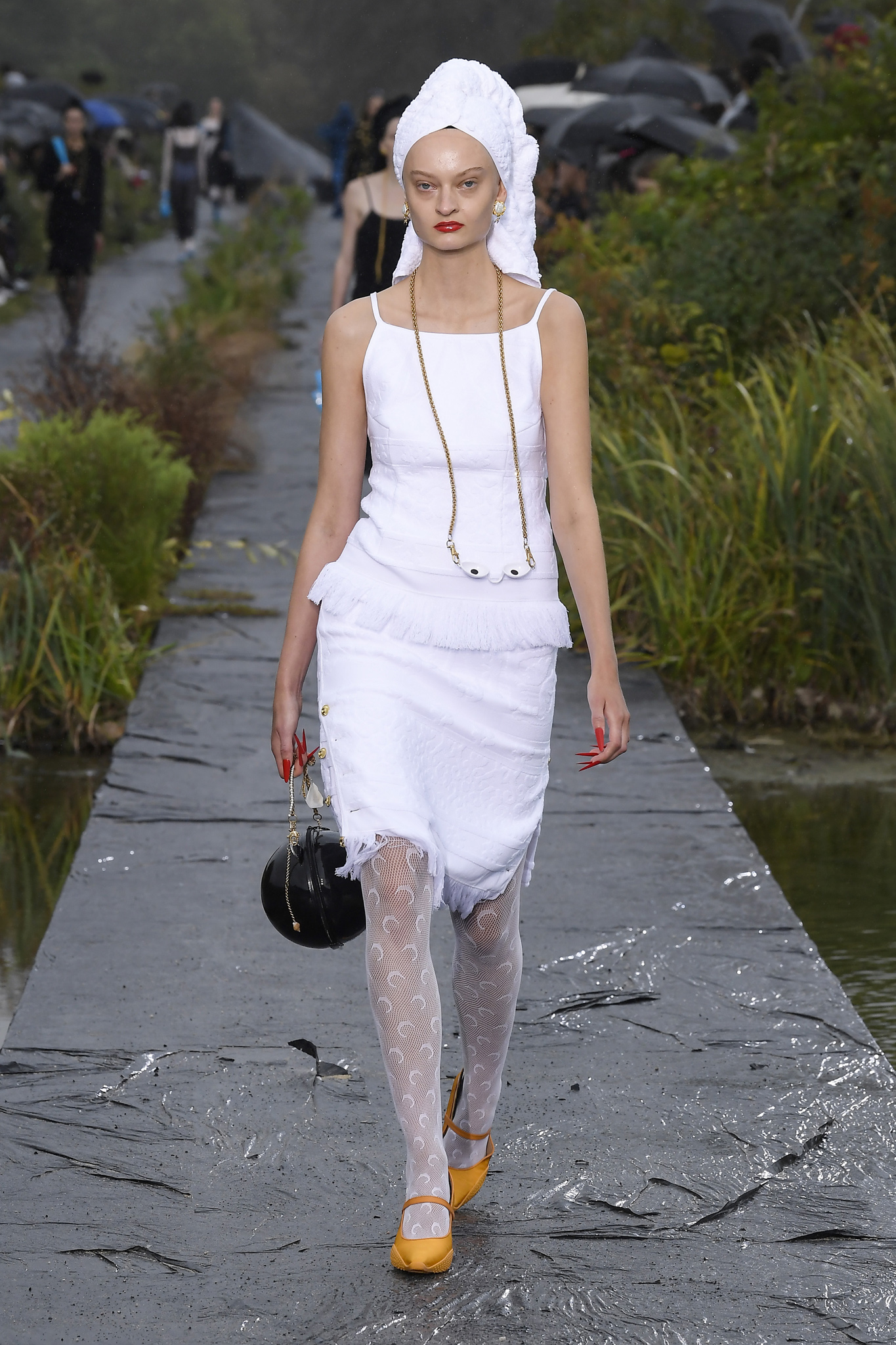 Other designers — including Givenchy’s Clare Waight Keller, Chanel’s Virginie Viard and Chloee’s Natacha Ramsay-Levi — struggled to find the balance between reality and fantasy. While I’m all for stripping back, and focusing on classics (that was another bid for sustainability relevancy this season), if something is coming down a Paris runway, it should make you sit forward in your seat, even if it’s in the remix of a shocking pink, puffed-up, twisted and ruffled Lacroix skirt with a Dries gray sweatshirt, or a Yves Saint Laurent embellished-to-the-nines Le Smoking jacket over jean shorts. We shouldn’t just be seeing or shopping mediocre, it should be spectacular. 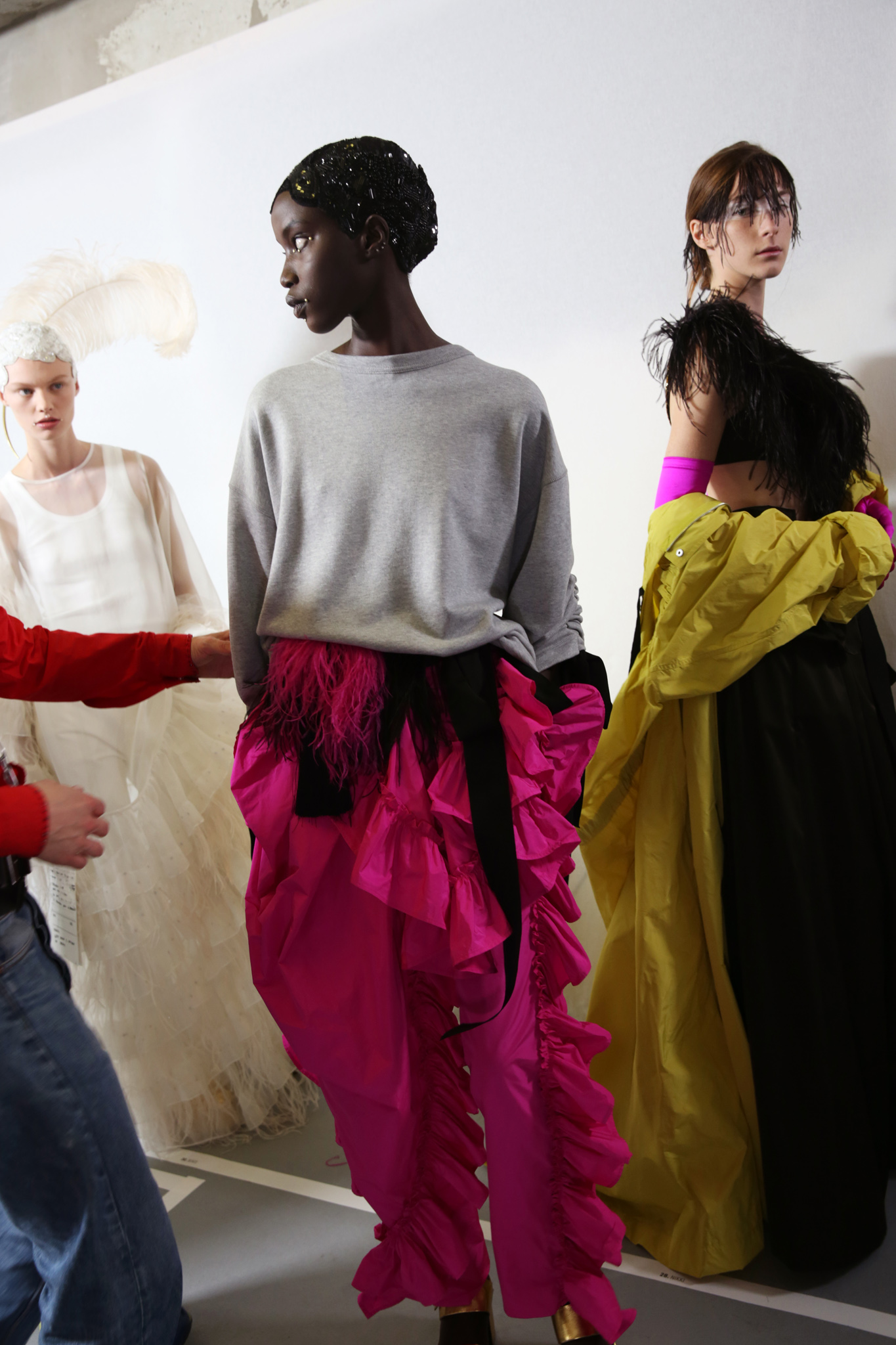 Shorts in the City

Speaking of shorts, If there is one must-have item this season, that’s it, God help us. (Because there must be some newness to drive the fashion machine forward.) They were in nearly every collection, from HotPants to Bermudas, and took center stage at Chanel, easing the transfer of the house of tweed to the younger generation. (Over-40s can try them with black opaque tights, which Virginie Viard suggested in her rooftop lineup, which may as well have been called “Shorts in the City.”) 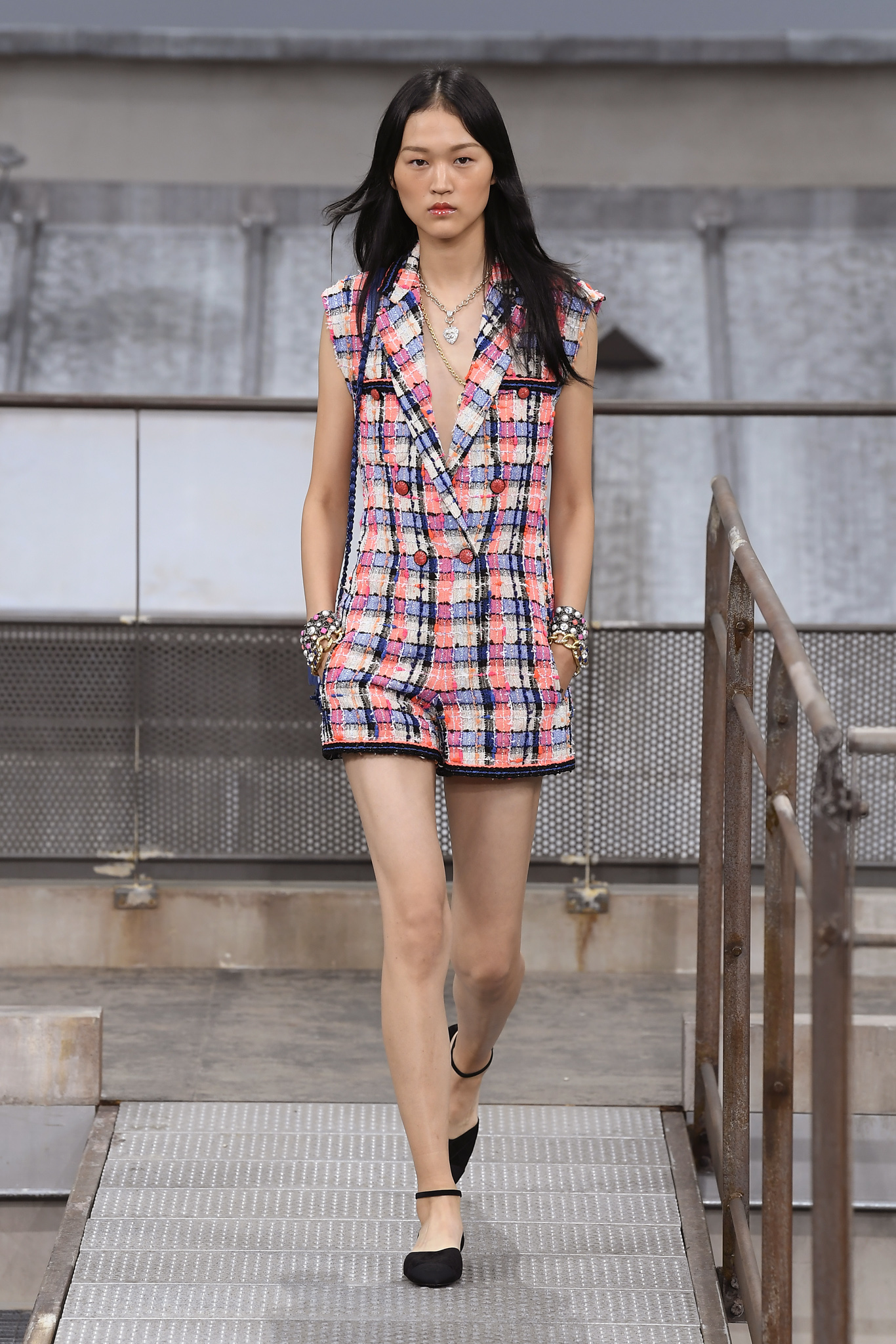 The other grounding base layer for the season was jeans, whether throwback Landlubber Seventies high-waist styles at Celine or Nineties baggy and bleached upcycled at Givenchy. I don’t have a problem with jeans on the runway, so long as you spin enough of a story around them to create desire (the stand-in for grandeur). With those two brands, we’ll see.

And if women shoppers are going to buy a dress this spring, it’s likely to be scarf-y, as seen on Joseph Altuzurra’s update on his silk Tamourine dress, this season in a dot pattern, or in Sacai’s many chiffon layered creations, or YSL boho-inspired, either by the YSL designed by Anthony Vaccarello or by its former designer Hedi Slimane at Celine. (Get ready for headscarves, too.) 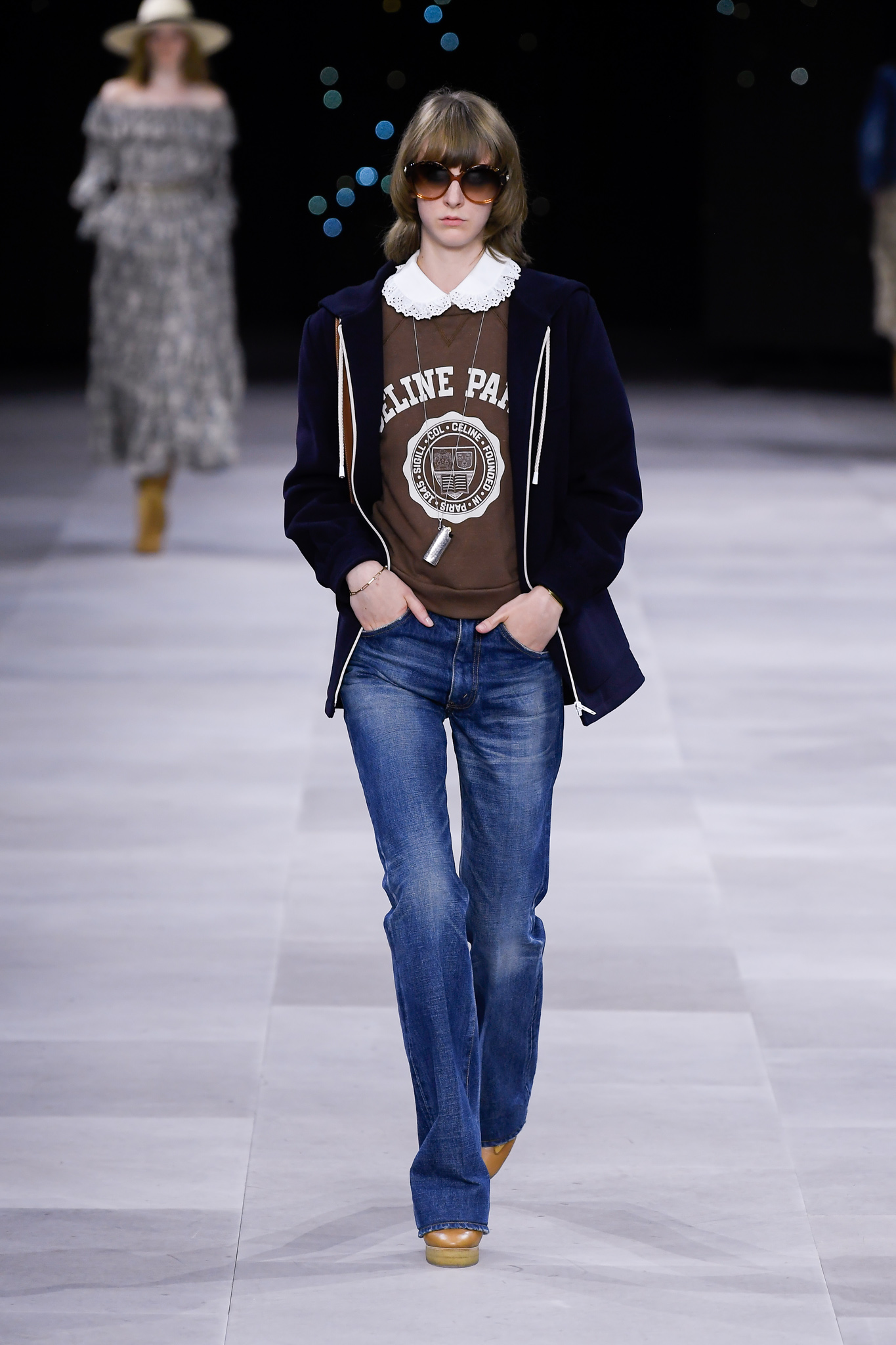 Sustainability Is the New Black

From recycled ideas to, well, recycling…this season felt like a tipping point for sustainability in fashion, when not doing anything was notable, and doing something big (Stella McCartney holding her most sustainable show yet, with 75 percent of it being eco-friendly, and a fashion vision that didn’t suffer for it) was downright cool. While rival luxury groups Kering and LVMH Moët Hennessy Louis Vuitton are locked in a game of one-upmanship over who can hire more, say more and appear to do more when it comes to animal welfare, carbon neutrality and the like, the industry will be watching for accountability, and customer reaction. If sustainability becomes a real luxury selling point, Marine Serre could be one to snatch a top spot at a luxury brand. 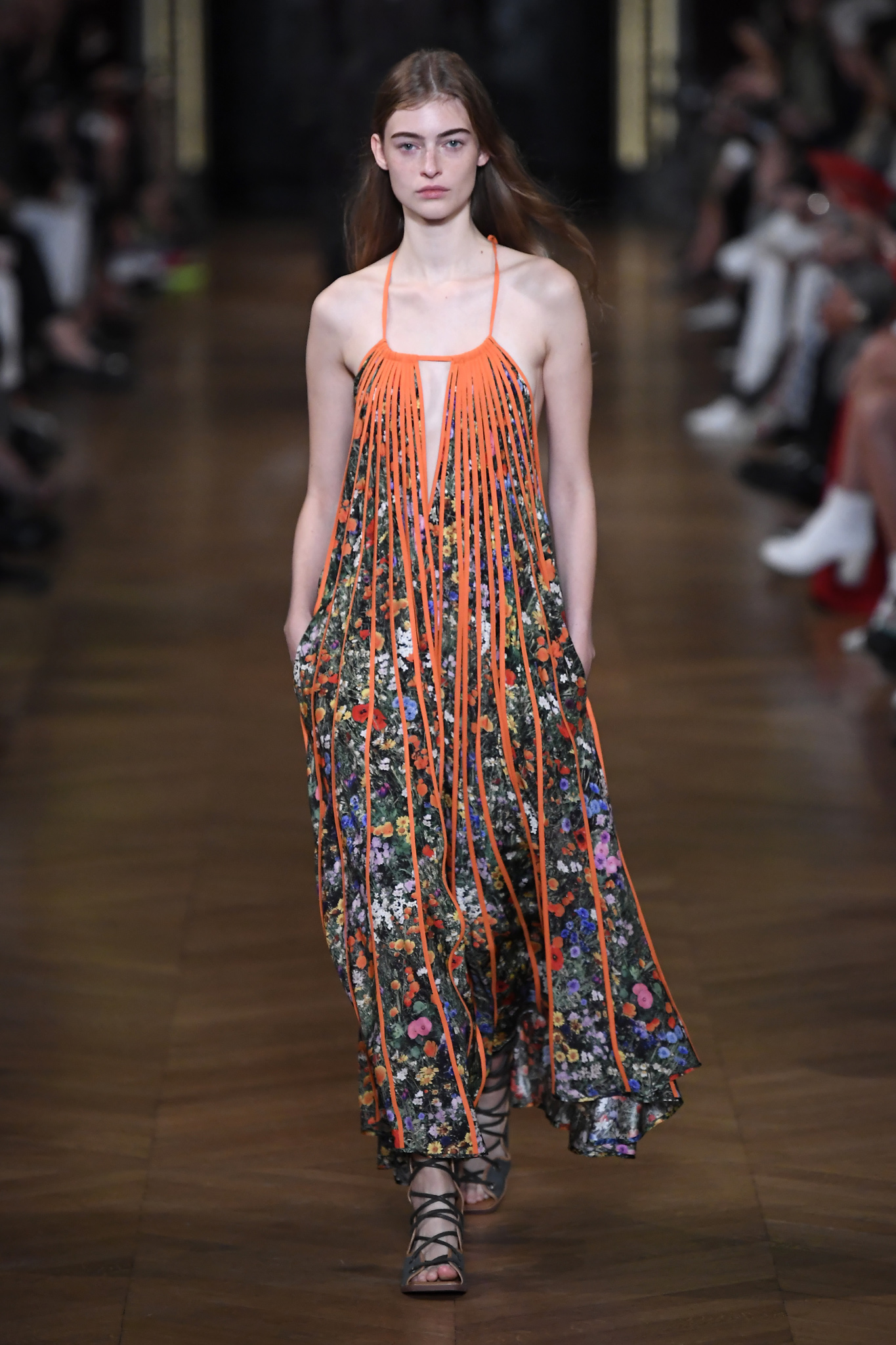 Diversity, Not So Much

While diversity was a major storyline at New York Fashion Week, it was less so in Paris. Sure, there were genderless clothes at Haider Ackermann and Mugler, and Balenciaga’s character study was inclusive in another way, of people with different jobs and economic backgrounds.

But this has to be the next fashion frontier in a more significant way. We need more black designers in addition to Virgil Abloh and Olivier Rousteing heading major global fashion houses. It’s notable that Kering on Tuesday named Kalpana Bagamane Denzel chief diversity, inclusion and talent officer, and that buzzy American designer Kerby Jean-Raymond of Pyer Moss is said to be shoring up funds to help incubate diverse talent. Bring it on.

If Paris is going to maintain its reputation as the bastion of grandeur — couture, everyday or otherwise — it must reflect the reality of a more diverse and accepting world, not only with models on a runway, but with talent in the atelier. When it happens, that will really be something to watch, from the front row — and the balcony.