The fashion spotlight turned on San Diego last week when Louis Vuitton touched down at the Salk Institute for its resort runway show, held at sunset in front of the glittering Pacific Ocean.

The region is undoubtedly defined by sun and surf, which inspired Vuitton designer Nicolas Ghesquiere’s epic collection. But there’s more than meets the eye.

San Diego has a thriving food scene with more Michelin-starred restaurants (34) than Los Angeles (27), a renovated Museum of Contemporary Art in La Jolla and a range of stylish homegrown brands up and down the coast, from haute upcycling to made-to-order evening gowns inspired by old Hollywood.

One hotbed of newness is the North County suburb of Oceanside, which until now had been pretty much preserved in the Beach Boys era.

The town has been undergoing a renaissance, however, managing to open and sustain two fantastic beach hotels, an exciting high-end resortwear retailer, a collectors’ worthy vintage store, and a number of new enticing restaurants even during the pandemic.

As a design consultant he tapped Paul Price, a fashion industry veteran who was chief executive officer of Topshop Topman and chief merchandising officer of Burberry, along with RTH founder Rene T. Holguin. Ron Robinson created the signature Bronze and Wave fragrances for the hotels and all the art is locally sourced from the Oceanside Museum.

(For vintage in Oceanside, there’s the not-to-be-missed Ransack, full of chic, collector-worthy Western and military pieces.)

San Diego has strong ties to the military, of course, and plays a starring role in the hotly anticipated “Top Gun: Maverick” opening Memorial Day weekend in the U.S., as it did in the 1986 film.

The original Queen Anne Victorian “Top Gun” beach house where Maverick (Tom Cruise) and Charlotte (Kelly McGillis) got busy has reopened as the High-Pie sweets shop on the Mission Pacific grounds. With funky decor, tongue-in-cheek movie memorabilia and music, and apple pie on a stick with an ice cream center, the eatery is being helmed by Tara Lazar, the restaurateur known for sprucing up the Palm Springs dining scene with Birba, Mr. Lyons and more. (Don’t miss the hilarious, “I feel the need, the need for pie” souvenir T-shirts.)

Up the street, Tremont Collective is a hip new dining and retail destination that puts hometown hat and sportswear brand Brixton front and center, next to the incredible fish taco joint Shootz Fish & Beer, which operates out of the Bottlecraft Beer Shop, and is the creation of regenerative chef Davin Waite and pro-surfer Cheyne Magnusson.

“Five years ago, you would not want to be hanging out here, it was a used car lot,” said Brixton’s CEO Raphael Peck, pointing out town houses nearby selling for $1 million-plus.

“We don’t really talk about toes in the sand,” he said of Brixton, founded in 2014 by three friends in a garage in Oceanside, built on a style called the Hooligan hat, and now owned by Altamont Capital. The store has a fun wall of hats including ranch styles, fedoras, beanies, buckets and more that can be customized with embroideries, bands and charms.

“We see the headwear space now where the sneaker space used to be 10 years ago. It was a growing groundswell, now you have collectors, and subcategories, and going to a restaurant in a cool pair of sneakers is the norm,” Peck said during a tour. “A hat purchase is courageous but if you want to be that person you will be the talk of the table.”

North County is also a place of makers and artisans.

One of them is designer Tristan Detwiler, who moved from L.A. back home to the bohemian surfer town Encinitas during the pandemic. His upcycled antique clothing brand Stan just won a Fashion Group International award in New York last week, and landed Detwiler on the cover of the May issue of San Diego magazine.

“This is my comfort zone, my speed,” he said over coffee at a place called Better Buzz in Encinitas. “There’s no fashion scene here at all, but all my art is based off my lifestyle, which is here. I thought L.A. was where I had to be, but I’m not trying to fake anything, I’m not trying to be something I’m not.”

His art practice, as Detwiler calls it, is simple: “I’m in love with things that look worn and old and that have a story to tell,” he explained of his one-of-a-kind futon cover shirts, Depression-era patch jackets, and harvest bag coveralls that run in the $1,200 to $10,000 range, and earned him a place next to Ralph Lauren in the latest “In America: An Anthology of Fashion” exhibition at the Met’s Costume Institute. “And it goes beyond that into sustainability, because I care about our planet and the ocean. I grew up being a surfer. I couldn’t be doing something against my values.”

Detwiler has shown four times as part of New York Fashion Week: Men’s, but is skipping September to take stock of his brand. “I’m not into growth for growth’s sake. I’m supporting myself as an artist and I get to surf every day, that’s what defines my success. I get to uplift people’s stories and live my own adventures.”

Across Coast Highway 101 from the coffee shop, Encinitas-based Vuori was teeming with customers on a recent afternoon. “We do Louis Vuitton numbers out of this store,” said founder Joe Kudla of the seven-year-old activewear giant’s success. (When it announced its latest investment of $400 million from Softbank Vision Fund 2 last year, the brand received a $4 billion valuation.)

“This little area was really the inspiration for the brand….It’s one of the most classic beach towns in America, and everyone is into leading a healthy lifestyle. It’s this confluence of professional surfers and triathletes, yoga practitioners and alternative healers,” said Kudla, who has the bragging rights for getting men into yoga pants.

“Back in the day, there were 4 million people who surfed in the U.S. and 30 million people practicing yoga. The majority were women but men was the fastest-growing demo, and I thought, ‘You’re saying the number of men who practice yoga in the U.S. is larger than the entire surf market?’

“Everyone was wearing board shorts to yoga and Lululemon had become really important for women, but men were hesitant. There was a disconnect, guys who were into surfing were not connecting to active. And that’s what we’ve done,” he said over a brussels sprouts appetizer.

Selling the SoCal lifestyle is part of the plan, including lounge, fitness, swim and outdoor essentials in a compelling au natural palette of grapefruit, kelp and shade. “But we have a bigger business now in Manhattan than we do in L.A.,” Kudla said. Not for long maybe; in November, Vuori will open a 10,000-square-foot store, its biggest yet, at The Grove in L.A.

Of course, San Diego has a mall culture, too, including at One Paseo, a newish mixed-use development in Carmel Valley that has a SoulCycle, Serena and Lily, Sephora and other high-end stores, including locally based Marrow Fine Jewelry, which also has an outpost at Lido Marina Village in Newport Beach.

“The first thing you notice is they put avocado on everything,” said Marrow designer Jillian Sassone of moving from Brooklyn, N.Y. to San Diego six years ago.

Sassone’s boudoir-like jewelry shop has become a go-to for push presents, contour wedding bands and more creative pieces, like the $30,000, 880-diamond Marrow x Nails of L.A. set she crafted for Machine Gun Kelly to wear to the Billboard Awards on Sunday. (The diamonds will be made into a limited-edition collection of rings sold on Marrow’s site, with proceeds going to charity in his hometown of Cleveland.)

Business is good — 2021 was the best year in the brand’s history — but Sassone admits to missing seeing the kind of fashion risk-taking she was used to in New York.

On the subject of glam, designer Alexia Maria is San Diego’s resident expert, specializing in Audrey Hepburn-style, silk faille off-the-shoulder minidresses, convertible jumpsuits and overskirts, bow-decorated column gowns and other timeless evening- and bridalwear pieces, starting at $595. She started her namesake label in 2014 in her hometown of Mexicali, Mexico, before moving it across the border and opening her first store in tony La Jolla.

“I grew up between the two, coming to San Diego to go to school every day,” the designer said of her blending of old Hollywood with the tradition of Mexican society dressing. “My first atelier was my bedroom,” she laughed during a tour of her Chula Vista headquarters, where she employs 24 people, including seamstresses and patternmakers stitching colorful bolts of silk in the back.

The business continues to be a family affair — Maria’s husband Ricardo Rubio is her CEO and her sister-in-law Gabriela Rubio is the brand director.

“We thought our clients would be a lot of women in La Jolla and women from Mexico who came for the summer, but to our surprise, we started being popular with Middle Eastern families visiting the area,” the designer said of the store’s early success.

The brand grew through word-of-mouth, began wholesaling to Saks Fifth Avenue in 2019, and attracted attention from Aimee Song and other influencers who promoted it on social media, before opening a second store on Madison Avenue in New York.

Then the pandemic happened, and like so many others, Alexia Maria had to weather returns, canceled orders and to close both stores. But in the end, the venture has matured and grown, the designer said. “Last year, in June/July we started to notice a lot of brides were ordering short dresses. Our minidress on Saks.com was the COVID[-19] wedding dress for a while.”

When shoppers can surf the internet, who needs New York, anyway? 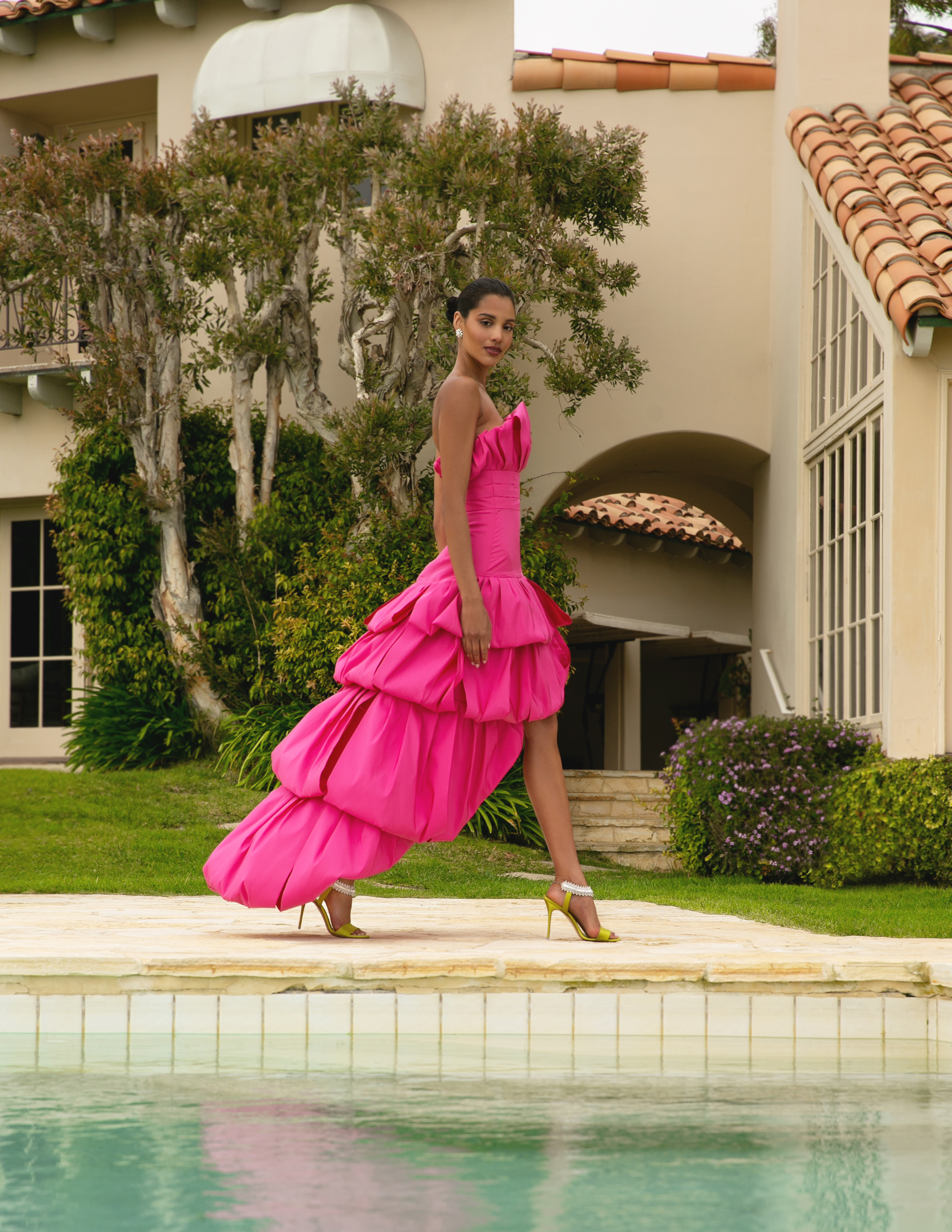