The allure of sun and surf is so strong, even if people are California dreamin' on Instagram, that some designers have actually reported sales lifts during the pandemic.

Even with California beaches reopened (for exercise only, ahem), it’s far from leisure as usual this Memorial Day weekend.

The coronavirus has been rough on the Golden State’s surf, swim and resortwear businesses, which were shut down just before spring break, the beginning of their busiest selling season, and further impacted by travel and tourism restrictions.

“We are a retail-reliant industry and with most stores shut down, people just aren’t buying apparel,” said Sean Smith, executive director of the Surf Industry Manufacturers Association, located in Aliso Viejo, Calif.

April sales were down 80 percent for independent surf and skate specialty stores, according to market intelligence group ActionWatch. “But of all brick-and-mortar retail, independent specialty stores focused on sports we can still engage in have a chance,” added the group’s president Patrik Schmidle. “What I worry about is that will not be large enough for the brands, they need the quantity.”

In March, Huntington Beach, Calif.-based Boardriders, owner of Quiksilver, Billabong, Roxy and RVCA, among others, was downgraded by Moody’s to a c-level credit rating. VF Corp.’s Vans is in a better financial position, though the brand’s annual summer marketing blitz, the U.S. Open of Surfing, is still to be decided for August.

This was supposed to be surfing’s big year. “The Tokyo 2020 Olympics was finally going to put pro surfing on a big stage,” Smith said, hopeful that the sport will make it to the rescheduled games in 2021. With all competitions sidelined, instead of posting social media content of their sponsored pro surfers riding waves, surf brands Billabong and Hurley have been posting turmeric tie-dye tutorials, yoga workouts, and demos of how to do a socially distant high-five (aka, an air secret handshake).

“On the positive side, our world focuses on getting out, being in the sun and on the beach, and we’ve seen in California, Florida and New Jersey, where they were lining up for passes to get on the beach, a desire…and surfing is tribal, you can go by yourself and socially distance in the water,” said Smith, who expects manufacturers to move from a four- to a three-season delivery cycle. “People are already jokingly referring to it as fall-iday,” he said.

The pain is being felt by women’s resort wear brands, too. “Spring and summer are the most important part of the year, it’s when we do most of our volume,” said California designer Trina Turk, who had the misfortune of launching her brand’s 25th-anniversary capsule collection of caftans, swimwear, sun hats, sunglasses and Seavees sneakers the same week in March she had to close all 11 of her boutiques in the U.S. “It was the absolute worst timing. If we weren’t all in panic and crisis mode, we would have waited until July,” said Turk, who furloughed employees, cut back styles and sku’s by 20 to 50 percent, and scrapped plans for anniversary parties at her Palm Springs and Dallas flagships in response to the crisis. (Surprisingly, she added, some pieces of the anniversary collection have still sold out.) 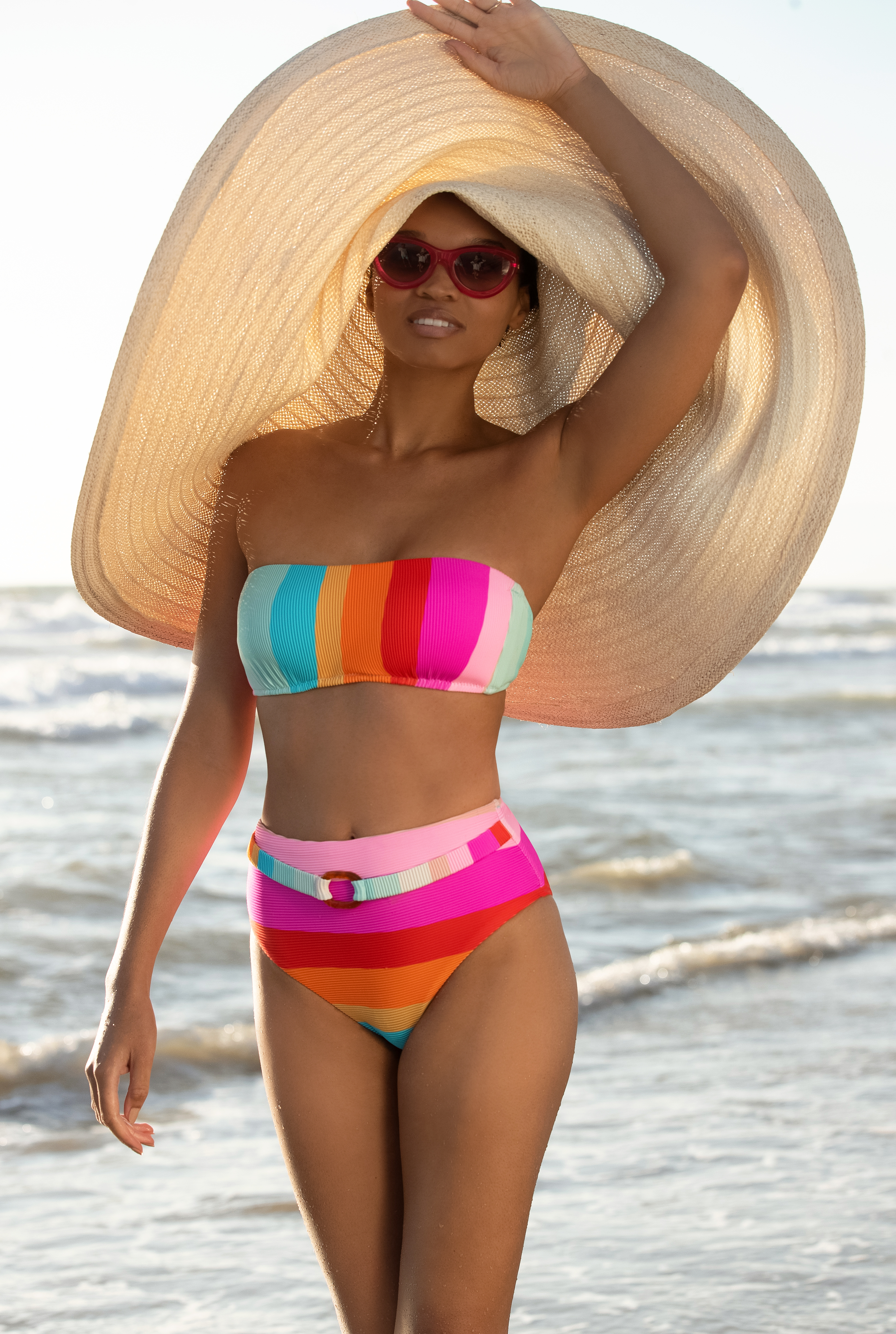 Swim had been a growth category for the brand. First-quarter web sales were up 43 percent year-over-year, but April was up just 6 percent. May is off to a slightly better start overall, now that her Dallas and Atlanta brick-and-mortar stores have reopened. “They are doing a little business, but it’s not like people are rushing back in. But at this point, we’re grateful,” said Turk. “Some weeks we’ve been up over last year, some we haven’t. But there still is demand. I guess people are just looking forward to when they can wear summer clothes.”

What they look like is another story. “There’s a portion of our collection geared toward department stores, it’s more occasion dressing, what you’d wear to a wedding, a shower, or for Easter. Will people still want those types of dresses?” said Turk. “The easy, breezy, Palm Springs caftan thing is fine. It’s the dressier part, are people going to want that?”

Staycationing has been a key branding message for Turk and others in resort apparel, including L.A. brand Rhode, which is shifting some of its print dress production to the print pajamas that have been embraced during quarantine by Brooklyn Decker, Debra Messing and others who have been posting photos of themselves with the #rhodeathome hashtag.

“Our original brand hashtag #ontherhode was about the most grounded in vacation and travel that existed,” said cofounder Phoebe Vickers. “But just because your vacations have been put on hold doesn’t mean you can’t wear what makes you happy at home. People are enjoying wearing clothes in a more casual way — with matching print masks, for example.” 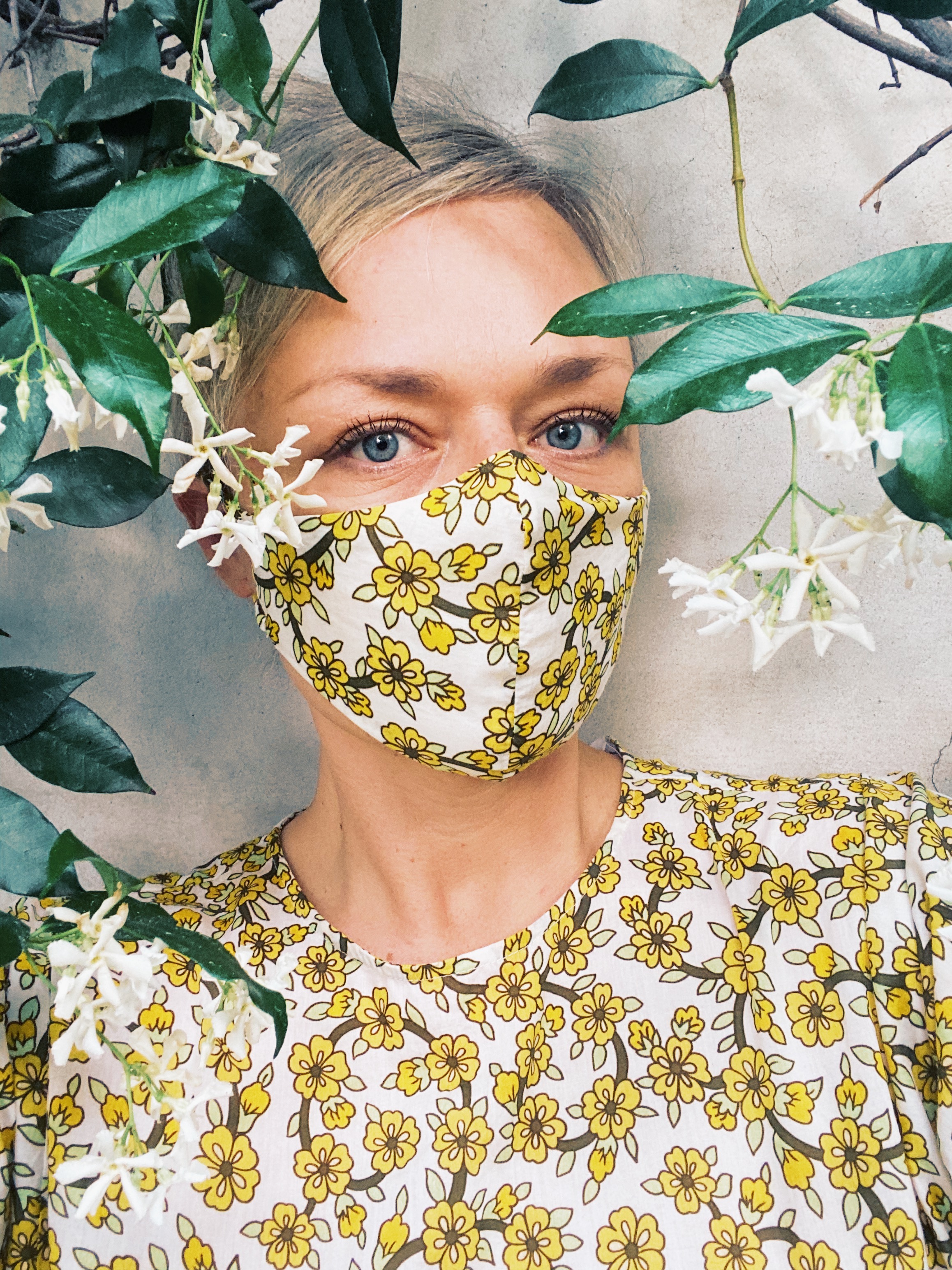 L.A. resortwear designer Natalie Martin has been leveraging her celebrity following on Instagram by reposting photos of Busy Phillips, January Jones, Monet Mazur and others wearing her batik-print, made-in-Bali dresses poolside or in their lush Southern California yards. To create original content, she started a Front Yard series, where she sends dresses to friends, and has her look book photographer go to their house and shoot photos from a safe social distance. “I love seeing the way my girlfriends put their individual stamp on our clothing,” Martin said.

California designers have long excelled at promoting the leisure lifestyle with a Hollywood twist, from Catalina Swimwear in the Thirties, to Juicy Couture in the early Aughts, to today’s Aviator Nation, whose sweats have been brisk sellers during the quarantine. Indeed, the allure of sun and surf is so strong — even if people are California dreamin’ on Instagram — that some designers have actually reported sales lifts during the pandemic, including hat designer Janessa Leone, whose styles offer SPF protection.

“Our growth through April and May is above last year even with the loss of retail and wholesale,” she said, adding that functionality and wellness are brand messages that seem to be resonating with consumers. “We had a scary downturn, but are now seeing a significant upswing — more than we expected,” said the designer, who recently added belts as a new category.

L.A. swimwear brand Frankies Bikinis has also been on fire, with April year-over-year online sales up 200 percent, Instagram followers up 750 percent (to 1 million plus), and engagement up 230 percent, thanks in part to Instagram reposts of Kylie Jenner, Bella Hadid and others wearing the skimpy suits. 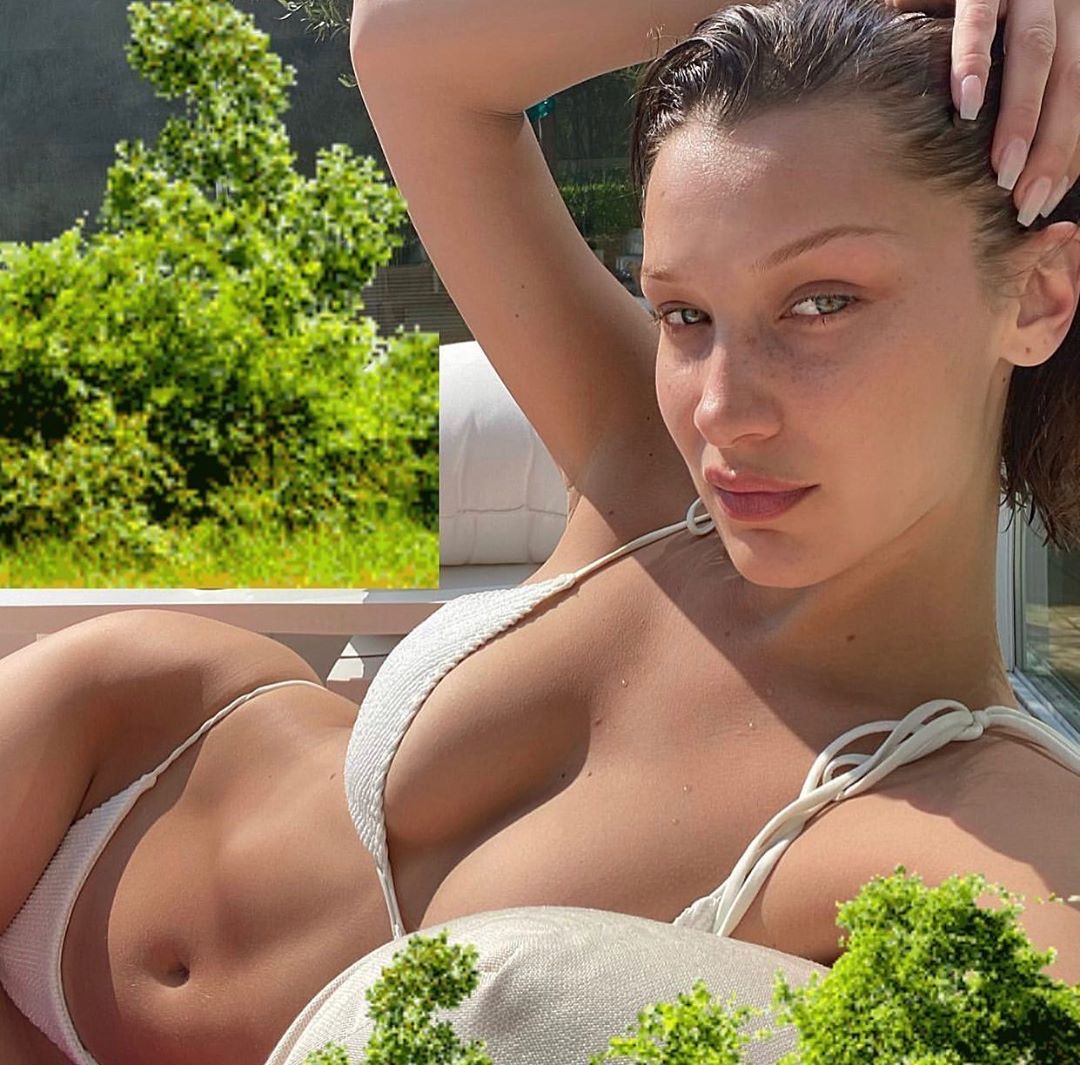 “Our content has remained the same as it would prior to the pandemic — posting a picture of a girl in a gorgeous bikini, it’s a bit of normalcy that makes everyone feel good,” said Francesca Aiello, whose seven-year-old brand is available at wholesale, and through her own e-commerce, with new styles introduced in a twice-monthly drop model. “I’m focusing on my direct-to-consumer business, that’s where I see the future going,” she said, noting that shopping incentives, gifts with purchase, quick shipping and putting a personal touch on social media have been key to her success over the last two months, when she has also seen a lift in sales of her terrycloth lounge pieces.

Famous friends never hurt, either. Aiello grew up in Malibu with the Hadids and Jenners. In February and March, both Jennifer Lopez and Bella Hadid posted photos of themselves in the same white Firefly bikini top and bottom, garnering more than 10 million likes between them. “Whether you’re sitting inside in your living room or have a deck or yard or balcony, everybody is trying to get their sunshine time in,” said the designer. “And they still want to look cute and take pictures.” 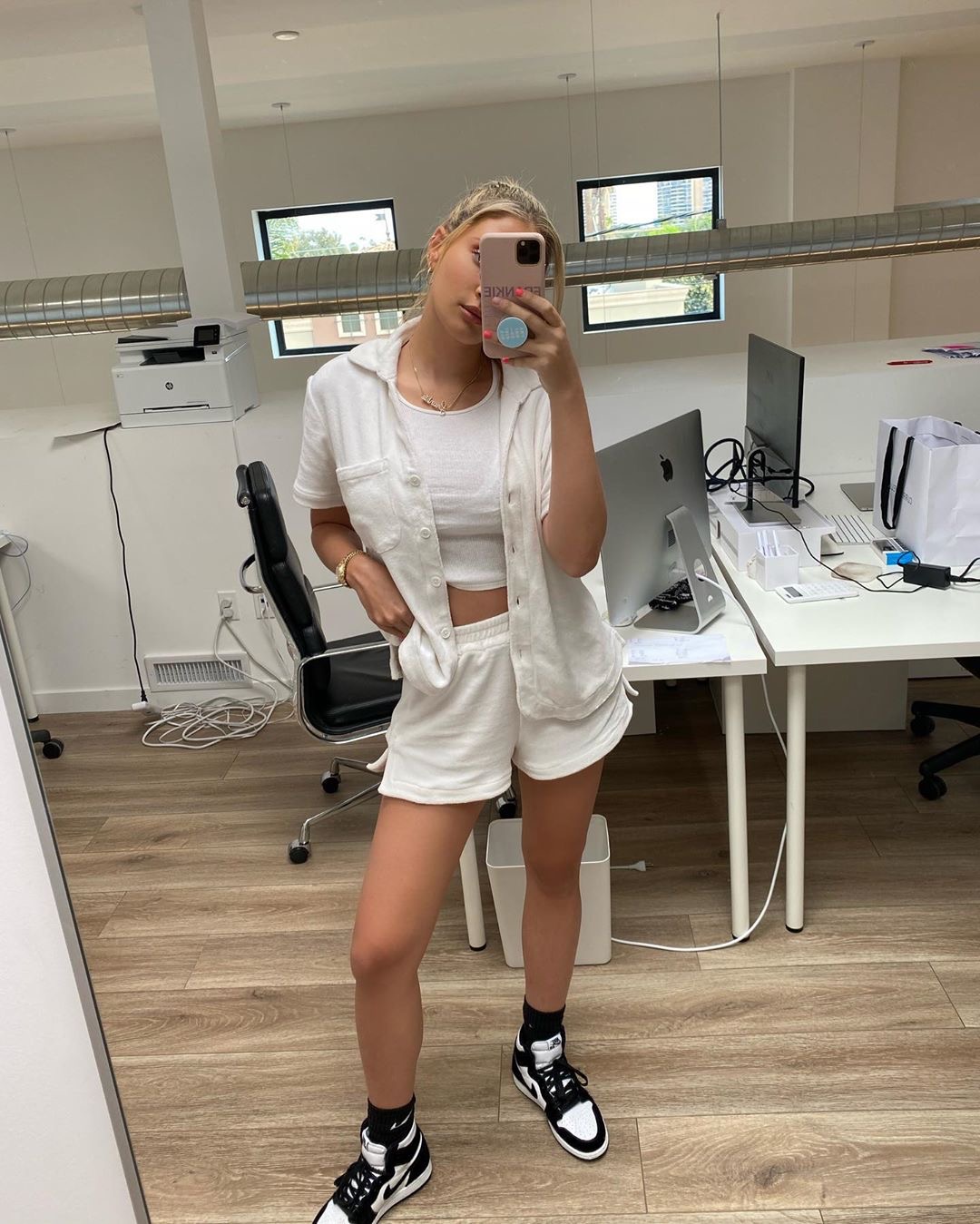