In the second part of her interview with WWD, the designer talks about the confluence of fashion and art and reveals her views on the fashion system. 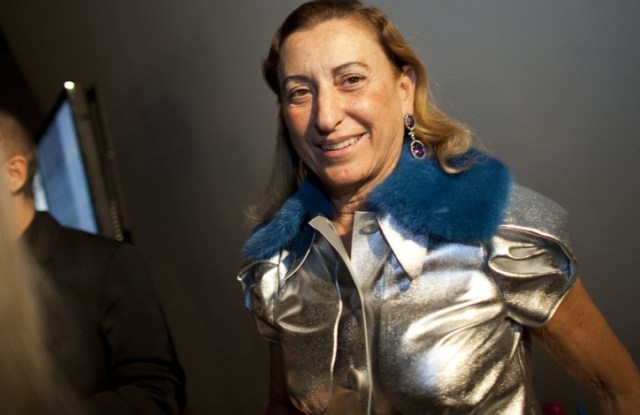 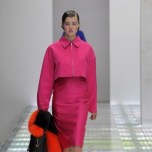 BEIJING — Miuccia Prada is known almost as much for her passion for art as she is for her designs. In the second part of WWD’s interview with the designer while she was here for a showing of her spring-summer 2011 collection, Prada talks about the confluence of fashion and art, shares her thoughts on the fast-fashion boom and reveals her views on the fashion system.

WWD: Do you think the current show calendar, the scheduling of the men’s and women’s shows and the New York-Milan-Paris system is still a valid one?
Miuccia Prada: Everyone says it’s old but every time somebody thinks of something to do to really change it, there isn’t this great solution. Because, in any case, putting the men’s and women’s together, I think for a designer it’s a strain.…You can put three male models [in a show] but if you really want to do a men’s collection, you can’t think of a men’s and women’s collection together…it’s too much.

Not doing shows would be very convenient. For example, if I didn’t have to do shows, I’d be on vacation half the year. The work behind a runway show is a big job in which [you put] all of your best efforts. Where you really push your ideas, trying to understand everything you have in mind, what really makes sense and what doesn’t. If it was just about selling, it would be much, much easier. But despite the fact it’s a very tough job, it’s definitely useful to your work. I think if everyone didn’t have to do shows, they wouldn’t work as well.

WWD: What do you think of the fast-fashion boom?
M.P.: I have never even considered it and I’ve explained why. It’s because I don’t like the idea of a bad copy of what one does for the main brand. If I had an ingenious idea to do fashion that costs less but that wasn’t a bad copy of something else, with completely different criteria and ways of doing things, I would do it. Also for myself, it would be an ingenious idea. For now, what I see more or less is the bad copy. Also with clothes that cost little, you need to ask why they cost so little. Because no one ever asks themselves that.

But it definitely is part of today so it’s all fine. I don’t have a problem with it. Everything that happens happens, so there’s no need to be against it. It’s logical that it’s like this.

WWD: What do you think of this trend of democratization of the industry with fashion and celebrities launching lines?
M.P.: It depends always on the content. If the content is intelligent and new, it provides value. If it retreads something old and it’s something people have already committed to memory but it’s just a matter of adding a name to it, I really don’t care. It always depends on what one does.…Perhaps only the Japanese have found a better way to make economical products that really make sense.

WWD: When I was interviewing Rei Kawakubo…
M.P.: What does she think of this?

WWD: She said that she did the collaboration with H&M, but in the end she discovered that the worlds were too different from one another and she doesn’t think she’ll do something like that again.
M.P.: It’s what everyone wants and I resist it because I want to be relevant in my own way.…I try to simplify my ideas and make them more simple but beyond a certain point, the simplification is not a positive thing.…So extracting the essence of a brand so that a brand is just a bow, the brand is just a heart, the brand is just black…everyone would want that. Even the customers would want that. The majority of people want to just sell and probably [Kawakubo] would have found this aspect negative. Because in the end she didn’t want to banalize what she does and almost become a caricature of herself.

It’s clear that Chanel is known for the little jacket and Vuitton for the LV and us? Nobody really knows what we are, which is fortunate. Because I try to resist making a banal product. It’s clear that, as the world continues to get bigger, a bit of simplification is necessary but not to the point where it becomes totally useless or uninteresting.

I would hope that those chains would create a young fashion that’s fresh, autonomous with new ideas…and that they would do fewer bad copies. There are already bad copies around. What I don’t understand is all the admiration for this [imitation]. What’s more, the same people in the luxury industry defend the market of the things that cost little. When things cost very little, you need to ask yourself how and where they were made.

Luxury products are costly because the companies…manufacture in Europe, produce with salaries that have to be paid. You have to pay for everything that is needed to do research etc., etc. It’s clear that these things cost money. It’s not like the owners of luxury brands make enormous profits. Probably the [mass market players] earn much more.

WWD: One of the other things Kawakubo said was that young designers these days aren’t pushing themselves hard enough. Do you agree?
M.P.: Those that push themselves, those that go forward, there are not thousands of those people through the generations. There have always been a few of them, so you can’t pretend now that the world is full of geniuses. The same thing is true in art. There are more museums and foundations than there are artists. Everybody wants the genius of the moment but there aren’t all of these geniuses.…There have been few revolutions in history and they are the fruit of long processes. There needs to be a rebellion against something. Now, what kind of rebellion can there be? If there isn’t one in art or philosophy and there isn’t one in politics…it’s not like fashion can invent itself one. Fashion is a reflection, a reaction to what happens.

What is missing is a new concept but if it doesn’t exist within society, you can’t think it’s the designer’s responsibility to create a revolution or invent who knows what.

WWD: Can you tell us about any artists, books or films you find interesting now?
M.P.: These are all things I never talk about. These are things that I consider personal and I never name names.

WWD: You have so many connections to the art world.
M.P.: Many yes. It has become my second job. We created [Fondazione Prada] in 2003. Probably in June we will do a very important thing in Venice. These things occupy half of my time.

WWD: Is there an artist in particular that you like?
M.P.: I never say. I don’t say because it creates big problems for me. [Laughs]

WWD: Do you go to galleries and look at the contemporary art scene here in China? Is that one of the things you do here?
M.P.: There are galleries that are, by now, the same as in the rest of the world. There isn’t really anything that has struck me.

WWD: How do you see this confluence of the worlds of art and fashion? Do you think it will continue?
M.P.: Now it has become a very popular union [of the two worlds].…I remember the controversy regarding [the 1996 “Biennale di Firenze: Il Tempo e la Moda” with Germano Celant and Ingrid Sischy] which scandalized a lot of people.…Definitely the fact that the worlds are coming together is something very positive, but then everything becomes a cliché, a turn of phrase and I hate those things.

I have always tried to keep [art and fashion] so separate, even to the point of possibly exaggerating and making a mistake, but I don’t care. Everyone does it their own way. There were very important artists that wanted to make bags with me and I told them no. Sometimes I think I’m making a mistake because maybe the coming together of these two worlds is the future. Everybody wants to do everything. I’m not convinced that it’s right and creates something really valid.… Fundamentally I’ll continue to keep them more or less separate.

WWD: Just a few days ago you presented your men’s collection. What is your view of men’s fashion at the moment?
M.P.: Men’s fashion is a product that is evolving a lot. I think that men are beginning to open up a lot more, especially the younger generations. They are not as formal.…I’m pushing in this area. I try to push in my own way without being excessive…because I really think things are opening up so I’m trying to do it in the most subtle way possible.

WWD: Men’s seems like it’s particularly important for the emerging markets. Do you agree?
M.P.: They say that emerging markets are a bit more open, but there are also open people in the Western markets so I don’t make these big distinctions between markets.…I think it’s more a matter of generations. Today’s younger generation in Europe is also open.

WWD: Do your sons want to go into the family business?
M.P.: I don’t want to talk about my sons. They have prohibited me from doing so.